After hearing of the demise of Tony Curtis on cable, I immediately and dutifully walked to our little den where I kept “old” stuff from my youth. Plucked out one item from an array of old pocketbooks comprising the few artifacts I have which catalogued those heady days of youth when we spent whatever free time and money we had watching Hollywood movies in the few theatres we had in the city.

For Tony Curtis, it was of course, the black and white Wilder film, Some Like It Hot, with three very popular stars in their own rights – Marilyn Monroe, Tony Curtis, and Jack Lemmon. Friends and acquaintances liked it so much, I had then thought of and decided on memorializing our exciting experiences by purchasing the pocketbook version of the movie. So here it still is almost as fresh as when we first viewed and talked about Tony in the movie. 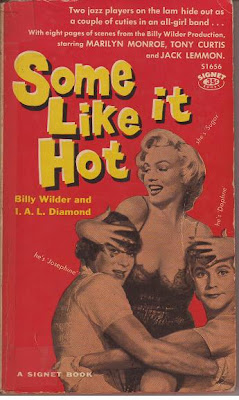 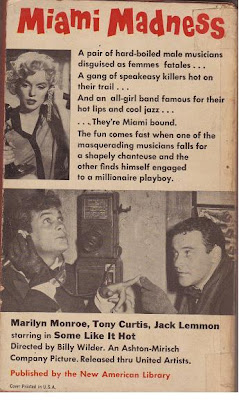 Needless to state, as teenagers we tried in our own little ways to look like Tony. His lush dark hair was just right for us since we all had dark black hair. And even better that he did not grow sideburns because very few of us could.

And when Elvis came with his equally stunning good looks, it made us even happier that Elvis himself would admit to his idolizing Tony’s dark looks, tarrying inside a theatre where he served as usher to watch Tony on the big screen. And also imitating his hairstyle and all. He was known to dye his hair black in his later more popular years until his untimely death in 1977.

Personally, Tony is equally remembered for his earlier films. Houdini - where he starred with the actress who would to be his wife some years later, Janet Leigh. And in a comedic movie, Don’t Make Waves, where he was paired with rising but ill-fated starlet, Sharon Tate.

True, Tony starred in many lightweight costumed movies, but for us then he personified and made somewhat real some of our fanciful escapist fantasies.
Posted by Amadeo at 10/01/2010 12:27:00 AM No comments: