Detach from the need to possess… 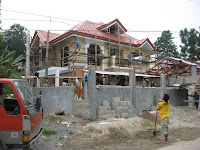 Handwritten in print letters and inserted under the plastic cover of one of the daily devotional books I try to rigorously go through each day is a summary of an article long-forgotten as for me to be completely clueless about its source or origins. But here it is anyway, copied word for word:

SPIRITUALITY AFTER 50
1. Detach from wounds and anger. Forgive all.
2. Detach from – Need to possess. Achieve, Or be the center of attraction
3. Say Goodbye to earth/loved ones.
4. Let go of sophistication. Be simple.
5. Immerse in language of silence.


Why this? Please allow me to backtrack.

Yesterday, I posted on my FB wall a couple of pictures of the new house we are constructing. My kids have seen them, so with some of my FB friends and relatives. Several comments were to my mind very insightful. Wendy mentioned project, while Joyce and Letti mentioned undertaking, all in the context of the new house. These were both revealing and insightful and let me tell you why.

The idea of building a new house was not new; it germinated over 2 years ago. It was triggered initially by the condition of the old one-storey house we are staying in RER, built in 1975 and now hemmed in on 3 sides by similar structures. The heat and humidity inside the house has made living almost intolerable without the constant use of electric fans and air-conditioning, aggravated by our losing battle with pesky termites, waged over many, many years.

That aside, the important concern lies in this. When we mentioned to friends and relations our desire to construct a new house, more than one responded this way: Why a new house at this stage in your life?

Believe me I was not offended. Friends and relations do not wake up in the morning promising to insult or offend friends and relations at the first opportunity. Rather it opened a critical facet that should have been factored in our decision-making but was not explored, touched, or even realized.

Yes, why indeed should we have to go through the whole tedious process – of buying a lot, paying rounds of confusing taxes and fees, engaging professionals to plan on a house that had to be both functional and secure, and of course, affordable, plus a myriad of other stuff that boggles the mind and pocketbook?

We all undoubtedly reach a certain stage in our lives where we begin to feel comfortable with what we have acquired and use. The alluring familiarity of it all is such a strong aphrodisiac making change quite a formidable task. And for me, doubly so. I develop very strong attachments to petty inconsequential things most people would dispose of without much thought. I guard or stow solicitously my hoards of old furniture, old books/pocketbooks/magazines, written documents, pictures, clothes, etc.

But this never came up in all our planning for the new house. How we were going to deal with all this. It did not even cross my mind albeit daily I had to leaf through my daily readings and would have to be blind to miss the 5 points enumerated above. Specifically and ominously in a big booming voice the second of such strictures - detach from the need to possess.

But the die was cast and inevitability had taken over. So indeed, this has become a project which has taken on the nature of an undertaking.

All considered, it is all for the good. As Wendy said – for wife and family. And imagine since it is constructed of concrete and metal, in a hundred years hence, they hopefully should be referring to it as the ancestral home of some Neri family.

Contrary to conventional wisdom the human face by many self-evident accounts appears to be the real window to a person’s history and identity and thus defines his significance. A symbol of his inner person that no other part of him can equal. It is the fine recording slate that tallies his failures and successes, the accompanying pains or joys; that bring either frowns or smiles that over time delicate facial muscles learn not only to remember reflexively but to leave more than superficial traces.

Its lines, grooves, ridges, and furrows are the tell-tale signs translated from the panoply of emotions unconsciously exhibited to etch and engrave remains of the life-bearing challenges that man is heir to.

While not many faces may launch a thousand ships as did Helen of Troy, our countless celluloid celebrities swear and live by them. For many they are their sure-fire capital to fame and glory. We remember many of them for their faces, their extraordinarily chiseled features that separate them from the rest of the cookie-cutter world.

But for most of us, our precious irreplaceable countenance reveals the hallowed pages we write on as we age. The concomitant pains and sorrows translated into lines, grooves and ridges – that we now picturesquely describe as crow's feet, age wrinkles, etc.

Here’s a little project for our vainglorious world. Building our own facial history to measure, compare, or simply to view with nonchalance the effects of our lives on our faces as we age. Of course, apart from the inevitable onslaught of aging on flesh and bones. And attitudes.

For one thing, close and long-time friends and relatives ought to be tickled pink vividly recalling the happy times and treasured camaraderie of earlier years associated with the metamorphosing face of the subject. It cannot help but bring floods of smiling memories.

This lazy and petty experiment aims to plot out some kind of pictorial “annual rings” layout, marking down the memorable events of periods as reflected in one’s countenance – say, like the years when we were lean and mean or having too much hair growth was the problem.

Since one’s face typically mirrors the prevailing emotions of the times, do we see a portrait or a series of them as portraying appearance of subdued sadness, or repressed apprehension, or inner peace and happiness? Or have we been more enigmatic in exhibiting our emotions? Why?

With the digital age, this project has become an easy treat, using only, say the MS proprietary app, Paint, which one can find in any Windows version, to collate the pictures arranged chronologically.

I offer mine as a clinical sample. I enjoin my few but loyal readers to try to create their own.

Of Living and Dying: Revisited

We are not only a very unique species, but also very interesting, tightly bound together with a strong strand of ironies and paradoxes.

Let me delve on one such interesting paradox.

It almost always makes for good, emotional, and moving theatre when the life or death of one soldier, or it could be a band of soldiers, is plucked out from anonymity and served to us in a platter of glaring and inspiring detail. I call this our “Saving Private Ryan” moment, since which one of us cannot identify and empathize with the unique circumstances of the man Matt Damon played.

When anonymity is replaced with personal details, we are almost always moved emotionally and intellectually and may thus exhibit a myriad of moods and emotions, ranging from respect, love, honor, fear, inspiration, and even to hate. Hate for the powers that be responsible for bringing about the set of circumstances to rain on our perceived hero or heroes.

But in another vein, we appear to be anesthetized emotionally when dealing with large anonymous numbers. We cannot seem to fathom our emotional depths when we are confronted with unthinkably large numbers. Private Ryan was one life and we invested our entire emotional cache on his life, conveniently shunting aside the countless thousands who died on the beaches of Normandy alone, who did not have to die but obviously died for a cause they believed in. But a single life such as a Private Ryan pushes to the fore the idealism of our profound emotional qualities.

Saddam sitting on his cell is responsible for at least a million deaths, from the time he ascended to power, through the Iran-Iraq War, through the first gulf war, through the present war, and down to his jail cell time. Yet we are quite emotionally detached from him and his dastardly deeds, (and others like him) as though he never quite existed or mattered. Yet surprisingly, many vigorously hate the man responsible for taking him out of power. It is arguable if we have invested enough grief for all the hapless thousands who died in the WTC attacks. We can hardly remember how many idealistic young men died during the regime of Marcos, though we clearly continue to reminisce to this day of the billions he stole and the single life of a Ninoy Aquino. What about Hiroshima and Nagasaki? Several hundred of thousand lives wiped out in seconds. But then we cannot identify with a single Japanese life from those holocausts.

The same would be true with what is presently happening in Sudan where genocide is in progress. We may have to wait until one life is highlighted in detail before we can release and give rein to our profound emotions.

Why is this so? All those who died in conflict possessed the same life, with the same values and potentials, as any other life of any other color, race, and ethnicity.

If one perceives life as having value unto itself then it is most important that everybody lives and not die. But we have been taught that earthly life is not that significant. Christ taught by example about sacrificing a life so a greater good can be attained. Earthly life then has value when it has purpose, not because it is life and has to be lived to its natural end.

One of my sons reminisced about another fellow officer who died. He had known him quite well, sometimes doing duty for him. He was of his age, married also with two young kids. He was off-duty and was riding his bike home on a stretch of freeway when a hit-and-run rig ended his life abruptly. I caught a bit of the news about this officer’s funeral. And the comment of one fellow officer caught my attention. The guy said that the deceased lived and died doing what he liked to do, riding his bike.

He did not say that he died too young, or that some crazy guy snatched this man’s life away from his family, his work, and his friends. But that this young man lived doing what he liked to do.

Admittedly, it feels good to get confirmation for some self-arrived conclusions, from such as this one.

In the 1960s, the economist Thomas Schelling performed research demonstrating that people are more likely to be moved by single victims than by statistics.

Another most recent validation confirming our unexplained bias toward the defense of “single victims than by statistics”. This time with the welcomed demise of the Number 1 terrorist in the world – Osama bin Laden. Again, we have heard many consoling voices, typically from the far left spectrum, decrying the death of bin Laden and condemning this unilateral act of the US of A as unmitigated assassination. Completely forgetting the heinous acts of this individual which have resulted in the deaths of countless people, mostly innocent victims. Even the Arab Street cannot extricate itself from the rut it finds itself in blindly coming to the defense of the dead terrorist. – at any time and at all costs.
Posted by Amadeo at 5/07/2011 09:31:00 PM No comments: