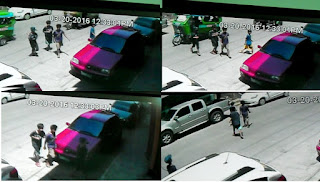 Unfortunately, not about football.  Rather about feral boys.

Are there packs of feral humans?  Much like the storied packs of feral cats and dogs, and even those of swine, we dread are roaming in the wild or elsewhere. Or maybe inhabiting in the inner cities of urbanized societies?  Or maybe locally, in the dank labyrinths of informal settlements which are choking the big cities in the Philippines?


We are told orphaned feral cats and dogs though clearly already domesticated for ages revert to their elemental instincts and truly become wild, and thus should be treated as such, with extreme caution and to be avoided if cannot be exterminated.  But what about packs of feral humans?  First, how does a wild human being act and think? Like a fictionalized Tarzan?  Or mythic Romulus and Remus?


History has generous accounts about early man in the persons of the Cro-Magnon and Neanderthals.  Though considered more savage than modern civilized man, we are taught that they did have their own intricate systems, standards, and rules for societal living.  And everyone abided by them, or risked being ostracized


So how is a wild human being to be characterized?  We can assume that he still is in possession of his innate survival instincts, thus the drive for self-preservation and procreation still operative.


Some years back in the US, a number of social thinkers commented on the aberrant behavior of young black thugs engaging in their “wilding” expeditions. This was exemplified by the case of that hapless lady NY jogger who was gang-raped by a number of young thugs while innocently running within Central Park.  Aside from being a gross incarnation of violence and control, rape is still a biological act of procreation.  So in a sense this was a case of public manifestation of elemental cravings for survival, as in self-preservation and procreation.


One may wonder how this is actualized locally here in our city, a world apart from the mean streets of big urbanized centers in very developed and populous countries like the US and those in Europe.


Growing and interacting amidst our daily living is an incipient  bunch of young children, either orphans or left alone by parents to fend for themselves, trolling our streets and eking out their daily existence  foraging for what they could rummage – either by asking or simply taking.  In that dire existence, poverty and starvation are daily companions.  And these street-smart kids have learned to blunt the pangs of hunger.  Sniffing chemical solvents to dull their senses and to induce some kind of altered state that will provide escape from brutal realities which appear in the form of extreme hunger and other social privations.


In this self-induced stupor, the strictures and demeanor imposed by society slowly recede.  These kids now show very little shame in their behavior.  The sense of morality has been severely blunted.  And the fear of the law and social order simply to be tolerated and skirted when possible.  So they crisscross the streets of the city, living in their own parallel universes with minds so stunted as to be considered feral.


Modern society is confronted with these new challenges in its continued drive to be more civilized.  But this regressive trait is surreptitiously manifesting in its young, those neglected or abandoned and left to its own devices. Here locally they are called rugby boys, and lately because of economics, they have opted with the use of Vulcaseal, a roof sealant, which comes in sachets and is cheaper. Rugby is a brand name for a kind of glue used commonly in business and at home.


How many do they number now? Big enough to arouse public response or indignation?