Strunk did not leave a note, but investigators said they found a chair against the wall along the exterior edge of the balcony. Hicks said shoe prints on the chair indicate that Strunk was standing on the chair right before he went over the wall.

Still, his sister doubts the suicide angle, given that the fall was only 20 feet. 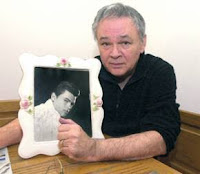 The Tracy Press in Northern California reported in its headline today the death of Roger Strunk, aka Rod Lauren, from an apparent suicide.

The late Mr. Strunk had of late been known more as a suspect in the death of Filipino actress, Nida Blanca, in the Philippines. He had been the subject of a failed extradition effort to bring him to the Philippines to face trial.

I was honestly jolted in surprise when I read the Tracy Press headline this morning since I did not realize that Mr. Strunk had resided in our comparatively quiet city of Tracy after he left the old homeland.

It is ironic to recall that my early memory of Mr. Strunk was as Rod Lauren, the singer, who in 1960 had a great hit entitled, If I Had A Girl. Many of my peers found that song as responsive to our then juvenile longings and liked it even more when Lauren got featured in the Perry Como Show singing that same exact song.

Unfortunately, nothing else was heard from him in our faraway island nation and in due time, he joined the ranks of the one-hit wonders.

But to this day, I would occasionally turn on the MP3 player and listen to that liltingly poignant song, plaintively longing for a girl to love.

In the same headline news, Tracy police disclosed that they found evidence in his room indicating a suicide. Thus, if it were a suicide note, it would be revelatory, especially if anything was written about the murder of his Filipino wife.

And traveling back to time, specifically February 8, 1960, here’s what Time magazine wrote about the up and rising singing star:

Not long ago, the thinkers on the RCA Victor staff were invited to invent a name for a new teen-age pop singer. Among the suggestions were "Erpsil Clevinger," "Ellie Oopman," "Cahn Edison" and "Rod Reel." None of these quite filled the bill, but the company soon hit on one that did —"Rod Lauren." Last week, big as life, Rod was climbing the charts with a pop hit called If I Had a Girl, having almost forgotten the fact that his real name is Roger Strunk.


With another record on the way and his first movie contract already signed, 19-year-old Singer Strunk-Lauren is the solidest new prospect in the teen-age market since Fabian uttered his first gosling cries. He is also an example of how a record company can create a singer out of next to nothing. Roger was a small club performer with an instrumental group called The Buddies when RCA spotted him on the West Coast last summer and signed him. The company budgeted $50,000 to launch Rod's first disk, bombarded dealers with promotional material, emphasizing the sullen good looks the kids are supposed to go for.

For six weeks Rod toured the country wooing the jocks, bouncing from teen-age dance to teen-age dance, and occasionally refreshing himself from one of the inspirational books he always carries with him, e.g., The Greatest Thing in the World (love, naturally).

No rock 'n' roller, Lauren delivers his ballads in a nappy, relaxed voice with the meticulous articulation and slightly teary quaver that Johnny Mathis made popular. Not the greatest thing in the world, but not too bad for a 19-year-old who was almost called Ellie Oopman.

The Police reported that Mr. Strunk stayed in Tracy Inn along W. 11th Street in downtown Tracy. As fate would have it, we are quite familiar with the place since we visit the area quite regularly and use its parking lot at the back of the old-world Spanish-type building. No, we have not stayed in the Inn, which arguably offers the best in hostel services around Tracy, and boasts of a good downtown location ideal for those transacting business in the city. Except that the front part of the building along 11th has several commercial tenants. One tenant is for pet grooming and our visits have been limited to that location.

But anyway, tonight prior to heading home from another location, we took a little detour turn to visit the fateful place and record the quick visit with some photos. 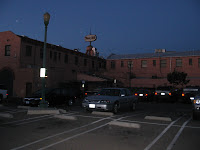 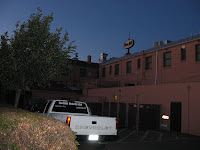 These pictures show the outside street level parking lot at the back with the back side of the building in the background.Click pics for clearer views. 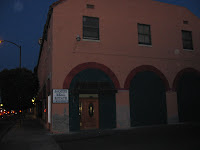 This portion is the parking lot entry along 11th Street. This shows the main façade of the building. 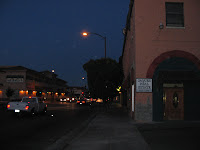 This shows 11th Street traffic at past 8 p.m.

One commenter in the Tracy Press website found it appropriate to mention that both Mr. Strunk and the late wife, Nida Blanca, died in parking lots. Except that as I remember Nida died in the parking lot of a high-rise apartment complex which most probably was not at ground level. 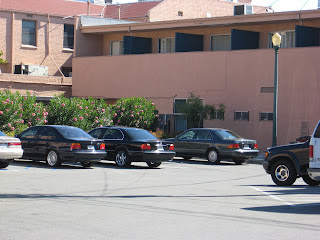