No Sticker No Entry

When I first arrived back in the old hometown, our private subdivision undertook some sprucing up, a bit of image building to some service areas which had gone to pasture in quiet disrepair. Like the guardhouses and the gates for entry and egress. Some minor construction work and a liberal use of paint and the overall result was one of considerable pride knowing that the subdivision looks presentably decent, at least looking from the gates and entrances. But more importantly, implemented were stricter compliance of certain basic subdivision rules historically known more for their being overlooked or flouted by both residents and visitors.

(The association should however do something about that Agoho Drive access road. Be reminded that since the start of the subdivision way back in the 70’s, only half of the road has been concreted. To this day, while the concreted portion continues to slide to non-maintenance hell, the other half has been quietly claimed by weeds, and close to the highway, by garbage throwers.)

One such basic rule was the need for all vehicles of residents to carry the subdivision’s sticker on the front windshield of four-wheeled vehicles and in convenient places for two-wheeled vehicles. Obviously, for easy and quick identification at the guardhouse, all in the name of basic security. During these times, one cannot afford to overlook such elemental security measures. That’s one of the primary reason guards are hired.

Thus, standing as quiet and mindful sentinel at the entrances is this strictly business painted sign; 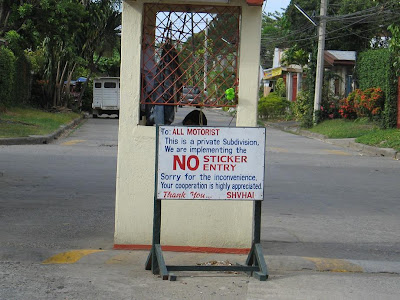 No sticker, no entry.

Such easy simplicity, one would think.

But, no. As I pass through the gates I continue to see vehicles without the required sticker. When asked, guards can only squirm and declare that indeed a good number of residents are adamant and hard put to follow such an easy requirement.

It does involve some cost, but very nominal at best. 150 pesos for one sticker and I believe a little lower for your other vehicles.

This afternoon, a quick drive through some subdivision streets revealed a good number of vehicles sans stickers outside some residences. Of course, a number of them could have been those of visitors. Was tempted to take pictures, but held back for very obvious reasons.

Hoping this little heads-up makes non-compliers realize that some residents are watchful.
Posted by Amadeo at 4/05/2009 04:16:00 AM 2 comments: