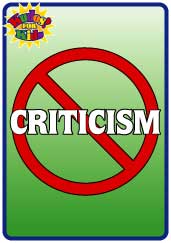 There definitely are enough treatises out there detailing rules and standards for good writing style in blogging. And this would hold true with regard to the select words, ideas, and phrases to use to attract and invite readership to one’s blog. Teasing and goading those restless search engines to up rank one’s site in their search results.

There are even those which dispense recommendations on what subjects to write about for optimum exposure and penetration in the blogosphere.

Other works have ventured out into the world of proper etiquette and rules of conduct in blog writing.

But is there enough literature out there that addresses specific issues, say, concerning criticism, beyond just the tone and degree of civility in dealing with them?

With regard to uncharitable criticism which continues to be on the rise in the blogosphere, do we believe too readily what we hear or read about others, especially with regard to things that tend to bolster and validate our own pre-conceived notions about people and ideas?

Taking into account that we often render judgment on others – with prejudice, whether consciously perceived or not. Yet we are viscerally aware that frequently our judgments are influenced by our temperaments, tastes, moods, ambitions, and yes, even self-love.

Thus, it usually is the better path to refuse judgment on one person based on negative criticisms one hears from another. Many an innocent man’s name and reputation have been besmirched, not only when he is absent and unable to defend himself. But also when the man concerned refuses to stoop to the level of exchanging incendiary rhetoric or validating errant charges leveled against him.

We as a species are quite predisposed to feeling superior and justified when we criticize others. And in the process we are apt to exaggerate the faults of our neighbor. And trot in false courage and justified glee, knowing we have cavalierly humiliated or derided another.

And if inordinate interest in the criticisms is generated, it typically fuels and inflames more uncharitable talk.

Thus, still an effective way to show disapproval of back-biting is to seek shelter in the golden rod of silence.

We accept that everybody makes mistakes. And the human critic may very well “know” better than the others. But even then, that same critic may not discern the innermost motives and intentions of the person being criticized. In this light then, one has no right to reveal and delve on the faults of others, except to protect the innocent, to help the guilty person himself, or for the public good.

More importantly, we ought to remember we ourselves may object to being the object of such criticism if directed against us.

Speak now of the criticized one as we would want others to speak of us when we are criticized.

We ought to be more willing and predisposed to think well of others than to think evil.

And let us aim to leave all judgment, as much as we are able, to one where judgment resides.