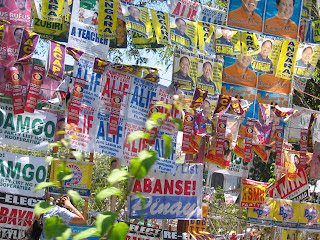 Maybe bordering on delusional misperception? Or to an outsider, maybe just flagrant displays of puerile behavior.

The Filipinos hold senatorial elections this coming May. The shortened campaign period appears to have galvanized eager politicians and their paid minions to almost frenzied escalation of campaign activities, believing that more is always better. More sorties into all corners where the electorate is massed in considerable numbers. More boring campaign speeches and noisy motorcades around the already traffic jam-burdened narrow city streets.

And then, there are the campaign posters pasted in every and all conceivable outdoor locations where any flat surface is expansive enough to be lathered with goo, glue, rugby, or whatever it is that they are now using to plaster and paste these election posters, so those self-indulgent, self-serving, cosmetically-enhanced images and text messages of various candidates are allowed to assault the already much harangued consciousness of the public. 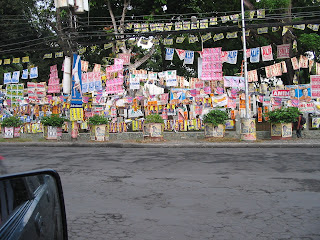 As a kid growing up in this same milieu, it titillated me to no end how the property fences and building walls exposed to the streets almost always carried a prominently located and oft-repeated warning sign, Post No Bill.

In a place where property fences, typically made of hollow blocks and built as high as 6, 10, and even 15 feet and laced at the top with embedded broken glass or sharp barbs depending on one’s social status, are viewed as a crucial part of the security measures for the precious domicile of residents, one does not have to stretch one’s imagination to realize the abundance and ubiquity of this type of enclosure around the city. 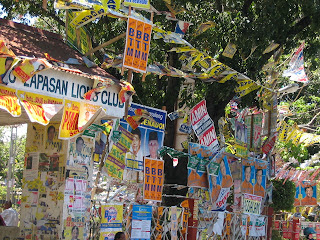 Definitely, very fertile grounds for savvy political campaigns to attach their election posters to. Typically done in the stealth of night, these miscreants are able to do their deplorable deeds almost with impunity. And I suspect, most times with the silent and tacit tolerance, or pesky annoyance, of city officials.

Ironically, while the practice of high fences is still the norm, the warning sign however is somehow on its death throes. One hardly sees them around. I surmise the reason is that property owners may have thrown their hands up and given up the fight to keep their fences and walls free from these ugly and unwanted finishings, whether during elections or not.

The practice of indiscriminately pasting these election materials where any flat surface may reveal itself, whether in public or private areas, is so ingrained in the local psyche and so rampantly done that the fight against it was a lost cause right from the get-go.

But during this particular election cycle, I feel a new height, or rather a new low, has been reached.

Again, where any flat, or not so flat, surface reveals itself – electric posts, street signs, traffic signs, or any standing post, etc. Most are trashily blanketed with this paper ugliness, which prominently deliver their equally “trashy” messages and images.

As shown in the pictures, the once beautiful unimpeded view of a nice and neatly maintained park beside the city’s historic cathedral has been usurped by the repetitious ugliness that has covered it like a dark and foreboding fog. That appears to announce the impending demise of what stands for beauty, probity, and even reason and logic.

The other one appears even more prophetic, because it covers the imposing physical symbol and presence of the people’s government. The provincial capitol grounds has literally been rained on by the locust swarm-like monstrosity that appears to have landed and got stuck on the trees. 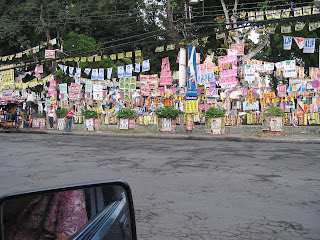 And these posters show the smiling countenances of the politicians who in theory are supposed to be tasked with honorably and respectfully serving the lowly constituents and their interests. But quess what, even prior to their elections, they are already showing the crass mettle that they are made of. They can’t even respect the symbol of that noble task and power.

May they with the most numbers of ugly posters crammed in the tiniest or most unlikely places be the declared winners. Give them “A” for effort, at least.

After all, more is always better, regardless. Or is it?

Speaking of the devil, a news item excerpted below highlights the issue on campaign posters, which calamity has plagued the entire country since it started holding “free” elections:

The filing of charges was the first time in Cagayan de Oro that legal action was taken against campaign posting violators since the 2007 election season opened, said lawyer Stalin Baguio, the city’s Commission on Elections registrar.

Posting of campaign materials outside the common poster area is a violation of Section 11 of Comelec Resolution 7767 or the Rules and Regulations Implementing the Fair Elections Act.

Needless to state, this rather superficial attempt at law and order is both too little and too late, if I may be allowed to bloviate.
Posted by Amadeo at 4/20/2007 03:01:00 AM 3 comments: