Are You Taken Over By The Internet?(Part 2) 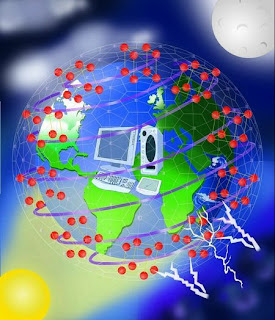 Though both names are familiar, I never got the opportunity to use either. If I remember correctly Compuserve was quite a challenge for your programming-challenged user. Prodigy software continues to be pre-loaded in some PCs but I am not sure what its status is today.

14 The Well
The precursor for social networking, the Whole Earth ‘Lectronic Link, founded in 1985, was the original (now longest-running) virtual community. It gained popularity for its forums.


Now, this is completely alien to me, though as stated above it is still in existence.

16 Spam/Spyware
Unsolicited e-mail, and software that watches your Web habits, mushroomed from annoyance to menace. Junk e-mail now accounts for more than 9 of every 10 messages sent over the Internet.

Hormel’s ever popular food product, Spam, has taken on a bad connotation. And junk mail has spilled over from one’s mailbox into one’s inbox, more pernicious and more menacing. Thankfully, lesser number of trees has been sacrificed as a result, one would presume.

Spam has given birth to anti-spam software to combat this menace.

And yes, spyware. It is everywhere, all-knowing, and difficult to shake off. As smart and intuitive as your most experienced life-breathing spies. And just as destructive.

17 Flash
Adobe’s Flash player is on 98% of all computers. Seen a video on YouTube or MySpace? Then you’ve probably used Flash. It animated the Web, spawning zillions of online cartoons and videos.

Comic book hero Flash has moved into the realm of software and codes, still with his signature speed and coverage.

And what about Flash memory, or card, or stick?

GPS (Global Positioning System) has made pinpoint-specific directions an everyday occurrence and expectation. A system held together by satellites in the atmosphere triangulating to pinpoint specific locations.

Whereas before its use was limited to the military, GPS can be found in a typical cellphone, in cars, as a stand-alone tracking device, or even in microchips implanted maybe in one’s pet.

19 Napster
Created in Shawn Fanning’s dorm room, Napster let more than 26 million people tap into a free database of music. Record companies shut it down. In its wake emerged legitimate download sites, such as Apple’s iTunes.

What fun, exciting, and beneficial memories I have of the original Napster. Even on a dial-up connection from a “freebie” ISP, I was downloading like crazy mesmerized by the novelty and unheralded capabilities of the network. Songs of the 40’s, 50’s, and the 60’s, all at my fingertips, literally.

Now, there may be scores of copy-cat (p2p) networks including a revived and supposedly revitalized Napster. Some with downloads for a price, and still others operating in the shadowy world of copyright infringement quietly churning out free downloads.

20 YouTube
The video-sharing site, bought by Google in 2006 for $1.65 billion, ignited a user-generated revolution online and introduced millions to the delights of Stephen Colbert, Chad Vader and Lonelygirl15.

A notch up audio files sharing is of course, video files sharing. And upstart YouTube capitalized on this need or hunger and converted the effort into a billion-dollar enterprise, good enough for it to be gobbled up by giant Google. And as expected, apers appeared to fill up the vacuum.

Ironic, that Google had started earlier its own video-sharing service, Google Video, prior to the widespread success of Youtube. But hey, why compete, just buy out the competition.

21 The Drudge Report
Matt Drudge’s news site helped break the Monica Lewinsky story in 1998, paving the way for politically-minded bloggers everywhere. He claims to have about 500 million visitors a month.

Many still question whether the Drudge Report qualifies as a blog, rather than as simply a news aggregator. But hey, why worry? I go to its site and get my important breaking news there. It definitely predates the uniformly-formatted blogs of today.

22 Bloggers
The more than 75 million Web logs have changed how the world gets its news. Bloggers have challenged the traditional media, lobbied for and against wars, started debates, and posted far too many pictures of their pets.

Bloggers? What is that animal? Not boogers? Not foggers?

Hey, I need to fill some space.

Dear to my heart since it is a native San Franciscan, and life-line for the millions of able-bodied men and women, even to the not so able-bodied ones, poring over classified ads on-line for whatever needs they may have – used cars, apartments to let, and even personal dates.

24 MySpace
This online hangout has replaced the mall as a home away from home for teenagers. The site has more than 173 million personalized pages. News Corp paid $580 million for it in 2005.

Though I followed the crowds and registered with it, I still am not sure what it is I am trying to get out of it, or vice-versa. But it must be good, after all Mr. Murdoch of NewsCorp (and known more as owner of Fox News) paid a fortune for it.

25 Gaming and virtual worlds
More than 19 million globally pay to explore three-dimensional Massively Multiplayer Online (MMO) games such as World of Warcraft and virtual communities such as Second Life, which let players do business or just hang out. Both use the easy connections fostered by the Web to build communities.

The gaming world has made possible PCs that can compute at dizzying speeds, with their very elaborate liquid cooling systems, with peripheral cards (like sound and video) that can cost as much as your typical PC, and physical looks that in our dreams probably belong in spaceships.