Some Personal Views On the 2000 US Presidential Elections 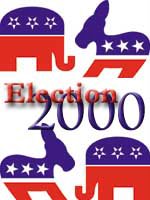 I have been in the US for over 26 years, so I feel I may be able to insert some ideas into this discussion, which started in MlQ3’s blog and continued here.

I essentially agree with the analogy of the dominance of elites in both countries. And I would add to the list of enumerated qualifications (wellborn, wealth and intellectual) another one, that of incumbency. Studies and polls show that incumbents are very difficult to depose in the US legislative branch of government. Once ensconced, they pretty much stay for life, unless other family members are so inclined to succeed them.

And the further observation that elections of members of the elites may be more symbolic than what real democratic participation ought to be, may also have legitimacy here in the States studying the conduct of past elections. Percentage of actual voters during presidential elections gravitates around 50+% of registered voters, not counting eligible voters who are in sizeable numbers and may just be apathetic to the process. Non-presidential elections, meaning statewide, county-wide and city-wide elections, are worse. Getting it to the 40s is considered satisfactory. In my many years in the most populous state of California, there had been instances where they fell below 40%.

Definitely then, elected officials do not truly represent the real majority of Americans.

Is this acceptable? Or is this typical throughout the rest of the democratic first-world countries of the world?

But I beg to differ on the following.

Two of the four justices giving dissenting opinions in the GorevsBush 2000 case were appointed by Republican presidents. And one of them you cited, Justice Stevens who was appointed by Pres. G. Ford, a Republican. And the other two by a Democrat president. Thus, it would be difficult to support the statement that the SC decision followed strictly along partisan lines. And by that I mean partisan political lines. I believe it would be more honest to say that the justices predictably vote along certain ideological lines, their positions on certain ideologies being known to the general public. One of the benchmark issues which would support this contention would be the hot-button issue of abortion (ROEvsWADE). The delicate but sometimes deceiving component in all this is the fact that certain issues are so identified with either party that decisions favoring one could readily unleash the partisan charge from the other side. To illustrate, legalized abortion is an issue near and dear to the Democratic Party, or the liberals. Thus, any SC judgment favoring reproductive rights could be construed as partisan, but in reality could stem simply from the ideological beliefs of certain judges, whether formed before or after their appointment.

It is ironic to note that even religion may not be a factor in partisan politics. The most vocal members of the US Senate for abortion are Catholic Democrats, though there are also on the Republican side of the aisle, Protestants who favor abortion. Now, with regard to the Supreme Court, the newest member who is still waiting in the wings to be confirmed, is also a Catholic and will make him the fifth Catholic member of a bench numbering only 9 justices. And Catholics represent only 20% of the entire population.

Yet, we have not heard a squeak from the pro-abortion groups including their Democratic leaders in the Senate regarding this obvious slant in the composition of the bench, given how adamantly anti-abortion the Catholic religion is.

In fine, I would find it difficult to accept a statement that purports to portray a Supreme Court that rules along strictly partisan political lines. And their for-life appointment releases them from any pressures that may impact on their freedom to judge based on their convictions.

Electors - In most States, the political parties nominate slates of electors at State conventions or central committee meetings. Then the citizens of each State appoint the electors by popular vote in the state-wide general election. However, State laws on the appointment of electors may vary.

Is my vote for President and Vice President meaningful in the Electoral College system?

Yes, within your State your vote has a great deal of significance. Under the Electoral College system, we do not elect the President and Vice President through a direct nation-wide vote. The Presidential election is decided by the combined results of 51 State elections (in this context, the term "State" includes DC). It is possible that an elector could ignore the results of the popular vote, but that occurs very rarely. Your vote helps decide which candidate receives your State's electoral votes.

And lastly, charges coming from Jesse Jackson, Jr. and Greg Palast were advanced to dispute and cast doubts on the election results of 2000.

But first, we have to know where these individuals are coming from, because that ought to be pivotal in judging credibility and validity particularly of statements that are of a very political nature. Mr. Jackson, son of Rev. J. Jackson, Sr., belongs to the opposing party and Mr. Palast is very undeniably partisan, and is described as a progressive or liberal. Aside from his challenges in the 2000 elections, he has also questioned the results of the 2004 Elections in Ohio, and had proclaimed Kerry as the winner of the entire race. Now, honestly if he had what might be considered an earnest diligent man’s good chances of proving his charges, then I would suggest that Gore and Kerry would have been the last persons to concede their defeats. But we know those are not the cases. So I will suggest further that we concede the benefit of the doubt to the proclaimed winner. And let the dissenting issues rest.