Tracy, CA: Is it Biker-Friendly? 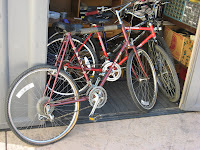 Lately I have had ample opportunity to look into the bicycles that have been sitting idly in the storage sheds at the back, slowly collecting dust and becoming hapless victims to rust.

They have been cleaned, greased, re-aligned, tires pumped, and finally checked off as roadworthy. So now I am the grateful user of three bikes of different sizes and configurations. One is a full-sized menacing Fuji racer left behind some years back by my twins when they finally left the house for good. The other two while of similar stance and profile have different uses, one having balloon tires and intended off-road, while the other has racer tires and looks like the typical wimpy road bike. The hulky off-roader was left by my daughter who moved to another house, and the wimpy one I believe was left behind by a girlfriend of one of the twins and never reclaimed 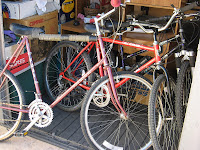 So now the late autumn afternoons have seen me exploring the immediate environs of our development, treading faithfully along bike/pedestrian lanes which fortunately encircle the entire grid bounded by Lammers to the West, Corral Hollow to the South, and Byron Road and 11th St., North and South respectively. Stretching maybe close to three miles circumferentially, it makes for a good afternoon workout.

The few leisurely driving jaunts that we have taken around the city, going through the new and not- so- new residential housing developments around the city made us aware of their ample provision for bike lanes along inside roads and around the outside perimeters. Thus, one has been encouraged to plan for extended ventures farther out of the comforting familiarity of home and to boldly explore the many storied nooks and crannies of the city of Tracy.

Driving around one cannot miss the many bike lanes around city streets. And a little Googling even informs us that the city is ever vigilant about providing bike lanes, when it can and has the opportunity. Thus, a bike lane(s) with no parking allowed will stretch along Grant Line from Corral Hollow to Tracy Boulevard. Has this particular ordinance been passed and implemented? Will try to see the next time I get the chance to drive over in that area.

So from that scanty perspective one is predisposed to declare that Tracy appears to be biker-friendly enough. But the next few months will confirm or challenge that when I do get the chance to pedal my bike along the different areas. Till then.

From where I have been, I have seen many bare-headed bike riders. So bike crash helmets are not mandatory in Tracy? Google was not helpful in assisting me on this score.