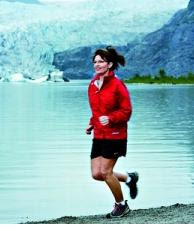 As everyone who reads this blog on a regular basis (and there are a few of you out there, though this time around it is not about recipes or religiosity), knows I have always been a Sarah Palin supporter, even before she was proclaimed by John McCain as his running mate. And this declaration is not coming from anyone of social or political consequence as many political pundits or social commentators are, holding respectable sways in their respective spheres. After all, yours truly is nothing more or less than a naturalized citizen who has since regularly voted at US elections.

And admittedly this steadfast support did not spring from any dreamy-eyed adulation of what Sarah Palin represents. Therefore, it was not because of her effectiveness or articulateness as a public speaker, not because she stuns and awes with profound or new-fangled ideas, not even because she has very likable or admirable physical and familial characteristics.

It’s just that her political and Christian philosophies jibe with mine and she exhibits that unabashed and unapologetic honesty and earnestness in expounding her philosophies, regardless of how they may be taken by those who read or hear of them. She does not even care much about how all of media would take her pronouncements. In other words, she does not play politics. She lives it. She says what is in her heart, and allows the ball to fall where it may.

Unfortunately, I do not see this kind of honesty, or excuse me, hell-be-damned attitude, in any of the prominent national politicians out there that I know of. They appear to be too concerned or cautious about images and public reaction, even at times when they say they do not care about images and public reaction. Though I must admit that a Michele Bachmann approximates closely a Sarah Palin, there is only one Sarah Palin.

And these same politicians always want to appear erudite, cool, and profound, even when expounding pedestrian bread-and-butter issues that your ordinary man on the streets has to constantly tackle with. In other words, spontaneity or being extemporaneous is not their cup of tea. Neither is connectedness with the ordinary folks.

When it comes to black and white issues, where clearly there is a marked delineation between good and evil, Sarah is not tentative, hesitant, equivocal, and fearful. She is forthright. She has courage where it counts most. She acts not for show, but for exposition of her beliefs.

Amidst all the artificialities, addiction to polls and image, and shameless self-promotion that pervade our social and political landscape, it is ripe that Sarah jogs into the scene to bring this country back to the tracks the founding fathers envisioned. There are enough people out there who share Sarah’s vision, who are in dire need of guidance and direction from a fearless and committed leader who is not constrained by personal agenda. Other than the ardent apostolate of her deeply-held Christian beliefs and unattached and unencumbered desire for public service.