OBAMA LEGACY: Fundamental Change of the US 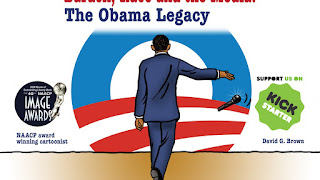 Wittingly or unwittingly, post-racial Obama in his two terms of office was able to bring about real and impactful fundamental changes to the US as a people and as a country.  Early on he had declared in no unequivocal language that he would lead the US to a path that would result in fundamental changes to its practices and institutions.  This he declared publicly and in the open, in his many speeches which were ripe with references to this, and even in direct policy initiatives.  Not couched in hushed whispered tones, or in secret meetings with his selected cadre of committed and adoring devotees, which included many of those in mainstream media.  But out there for all to hear and learn.


As to whether he truly believed that he could bring fruition to all those implied changes, still remains to be seen to this day.  Many had doubted he had the depth of knowledge and experience to be able to build a comprehensive master plan detailing all that he had wished the US to become.  Though there were some sources he had which served as critical guideposts toward the goal, like the known works of Saul Alinsky which aided him greatly in his previous work as community organizer.  Anyway, his personal belief in himself may have been sufficient prod and crutch to leverage him along the path he had chosen, informed by his ardent leftist ideology.


But whatever and however it was, any serious reckoning would expose  the fundamental changes he had wrought, made easy and aided by many people who idolized him for simply being himself.  Though in hindsight maybe many did not really fathom the depths of the kind of person he was.  And buyer’s remorse like, they are now slowly inching toward discovering the sinister aspects of him with public revelations now unfolding.  That he was not above employing any and all means possible to attain his goals.  That at times he drifted into illegality and subterfuge as what Deep State operations are now showing,  having been exposed to the sunlight.   It is now undisputed fact that his administration illegally surveilled members of the press who were critical to them. He lied with a straight face about patients being able to keep their doctors with Obamacare.  And when confronted with the reality simply brushed that aside. The actualization of the Deep State in its many manifestations and their authorship inexorably pointing complicity all the way to the top echelons could only translate that he had not only prior knowledge but also consent.  And as the Russia collusion scheme has unraveled, we are slowly beginning to realize that this grand coup had indeed tried not only nullify a presidential election but up to the point of attempting to bring down a sitting president.  And to whose lap does all this ultimately fall into?  Slowly things are gelling and inexorably pointing to one direction.


Anyway, here are the ways Obama has fundamentally changed the US.  And to this day, we are witnessing daily the unfolding dramas that speak clearly of these unwanted changes to the American way of governing.


Health care accounts for about 16% of the US economy, a huge chunk.  When Obamacare was passed into law, the established system was radically upended and brought into a quandary even before Obama could leave office.  Now it has become a prickly sore issue and there is no relief in sight.  The problems it has engendered are so formidable, the only solution may be a complete overhaul, and at this time there is nobody or no entity in possession of any possible solution.  A gigantic solution for a gigantic problem would be needed.  This is not even debatable.  Speaker Pelosi when asked then that not enough time was devoted to looking into the voluminous healthcare bill, simply brushed it aside and smilingly replied that yes, it will be looked into after the bill passed.   And indeed, that happened and discovery was not pretty.


Race relations had not been as tense and as bad as during the time of Obama.  A supposedly post-racial president instead brought ripe and tenuous race tensions across the breadth of the country. We can only point the blame to the president who spared no efforts in stoking race tensions for his own political gains.  For all intents and purposes, the country was not only reliving but litigating anew the pre-civil rights era.  But this time around incendiary rhetoric and violence were coming from the other side.


How come and why so?  A new president wanted drastic fundamental change, away from the sustained drive toward an evolving racial harmony and equanimity, to driving divisive wedges against the races with  speech and actions going against established norms and attitudes in play then.


Deep State rumblings started getting notice and register at the start of the Obama presidency, and noted especially in the people he started to fill in positions.  And he took efforts to bloat the Federal bureaucracy with people loyal to his ideology.  And thus during his time, the bureaucracy had never been bigger and more expensive to maintain.  All this came into the fore, when an unlikely Trump presidency became a reality.  And that was when all hell broke loose.  And all the shielded players broke into the open and made their operations more overt and aggressive.  Now everything is in the open, the only question is when accountability and responsibility will transpire, to bring back normalcy and prestige to long-established US institutions.


Where is history in all this?  Will it in the final analysis declare the righteous in all this and bring historical shame and humiliation to all those who disrespected the law and justice?


In this case, with so many players to be made accountable, history may take a while getting all its ducks aligned and all the right places filled up.  One also recalls that in the case of Nixon history made quick work about its job to assign proper places for the players.  But we believe not so in this case.  Nixon when confronted with the facts as they truly were, did not waste time making the right decisions and packing himself out of office.  For that, he gets kudos for his humanity, flaws and all.


Not so nowadays.  Now, getting politicians and their operatives to admit the truth and make amends is no easy task, like pulling teeth.  Even many media personalities have not been inoculated from this. Politicians now lie to the teeth even when the truth sits right before their very noses.  Morality and personal responsibility have been summarily thrown out of the window and into oblivion.


The freedom and ability to criticize is the lifeblood of the kind of idealistic relationship existing between those who govern and those we are governed.  It provides the necessary contravening process via which those who govern are checked and regulated so that they govern wisely and effectively.

Many would say that this task could be the be-all and end-all for those so engaged and many would tend to agree.


But in the realm of godliness and even just plain-speaking moral good, we ought to be convinced that speaking truth to power should not be all there is to it,  so that after our protestations we can then lay back self-satisfied in the contentment that we have done everything and all our level best.


We forget words is but a segment.  The other more critical part is action.


How do we all and individually measure up to this?


Forget the grander scale of grandiose oratory and grandiloquent treatises.


What have we done personally to justify both to ourselves and sundry that we have done our level best to contribute to make a difference?  However insignificant in the grand scheme of things.


For this is the strict criterion upon which our individual lives will be judged – not by mere mortals but by our all-knowing Judge.