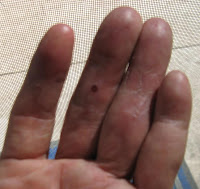 This blog has not seen an update for a wee while. It’s because not much out of the “ordinary” has been happening in my temporarily-induced monastic life. From the outside one might be tempted to say that it’s one that seems listless or adrift, though I would fiercely dispute that without arming it with any defense. It’s just that my current nagging concerns are not for public consumption. Except to say maybe that pretty soon my eventual “resurrection” can be expected.

Anyway, though I had been able to muster some slack time at some point, time enough to put fingers on keyboard and start grinding inanities, still the appropriate subject(s) eluded my wandering ken.

Since I spend a good portion of my free time scouring the web for political news and blog posts, still I could not get myself to write commentaries on the piping-hot items cascading in the confusing worlds of media. There are tons of very experienced, savvy, and articulate bloggers out there churning out promptly their Aristotelian analyses of political news as they break. Even the countless and at times nameless commenters continue to share their precious nuggets of ideas into the mix making one’s head spin uncontrollably trying to accommodate and soak them in.

So one is prompted to exclaim: what could my puny mind add to the current slew of masterful discussions from clearly more qualified sources? I would say nothing much. I would only either be embarrassing myself or reduced to mouthing off ideas already beaten to death somewhere. So might as well stay off the topic, and be content playing the passive role of observer and learner. And that serves me fine.

But something has to be written. The US economy? Wall Street and Main Street issues? The fields are stacked with the brightest and most analytical minds to inhabit this world. One can only gape in awe at the parade of data and charts that daily floods our social consciousness.

But surely, there must be a topic where I can reign somewhat, because I could be considered the authority or expert of it, and maybe the only one disposed and available.

Given my circumstances, it would have to be something trivial. Something of little value and concern outside the confining premises of my own life. 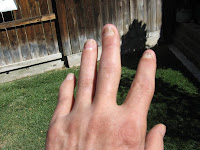 Now I know! a layman look, or call it pseudo-analysis, on the fingers of my left hand which rather inadvertently went through a bad accident some six months ago, and which to this day continue to restrict the hand’s full function and flexibility.

Though the visible wounds are now completely healed, having seen the last of the scabs some 2 months ago, the hand is far from satisfactory operation. Typing with it is still a challenge, holding stuff with it tentative, and the skin around them seems tender and not as sensitive to the touch as before, or when compared with the other hand.

After consulting with two doctors, one focused on physical therapy and the other specialized in surgery, I have come to the inadvertent conclusion that the convenient path for me would be through some kind of physical therapy – but to be performed by me! Decided in no small measure after the latter doctor opined that if I had wanted my hand to be restored to full function I would have to undergo a procedure that involved kilometric incisions in my hand and fingers and many months of my time both for the procedures and recuperation.. To which I blurted out reflexively, no way.

I confess I went into those two sessions more or less decided on what I wanted to do with my situation and already armed with the possibilities. After all, I have had 6 months to think about it. And how can one miss a day, or any wakeful hour, not being reminded of the sorry situation when it stares back at you right in front of your very nose?

But I did learn something new and important enough. It concerns this stealthy and pernicious condition called bone arthritis, which comes unnoticed and starts residence in one’s joints; and which typically will remain unnoticed and untreated until pain is added into the equation. A condition that will begin to manifest its dominance as one advances in years, regular exercise notwithstanding.

In my case, the accident was the perfect storm that allowed both trauma and signs of arthritis to take over and do their thing. X-rays showed that in some finger joints, the bones have started to fuse limiting the fingers’ flexibility. Funny I said that this condition is duplicated in the small finger which was not involved in the accident. Blame arthritis solely for that.

An elder brother suffers from a more serious form of arthritis and gout. And again, almost all so suddenly. Caused by a sudden change in routines?
Posted by Amadeo at 9/17/2009 07:48:00 AM 5 comments: