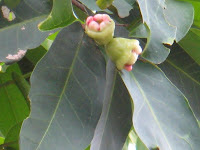 This morning as I sat on my comfy bench parked on a shaded side of the house, wearied from the early morning heat aggravated by another electric blackout, I espied the tambis tree of the neighbor and was immediately transported to my youth. By the way, this neighbor’s lot used to be owned by an elder sister who was responsible for planting this tree when she still owned it.

The tambis was starting to fruit, laden with a lot of blossoms that will eventually become the pinkish ripe juicy fruits very characteristic of the tambis in these parts. I had though to exert some extra efforts to first of all properly identify the tambis to those unfamiliar with it. Thus, learned second-hand that its scientific name is Svzygium Aqueum. And in the process also learned a bit of confusion about whether tambis and macopa, another local fruit tree, are one and the same. In our old hometown, we had both, bearing different looking fruits, coming from two different looking trees, and definitely not one and the same.

Here’s a bit of the confusion as brought out in this site, and one commentor’s statement was most telling:

Tambis & Makopa are not the same fruits! In the Visayas, Philippines, we have both. They may come from the same family but are definitely two different fruits. Makopa has a smoother skin while Tambis’shallow furrows are more pronounced. Makopa’s fruit is finer but has a faint tart taste. Tambis fruit is coarser & no tartness. Makopa has a deeper red color. Tambis is lighter like pinkish red.


This necessary distraction has made me veer away from the reasons why I was reminded of the tambis and its tree.

So, meanwhile back to the ranch ……

As an adolescent but not quite a teen yet, I was kept mostly indoors or within the confines of our small house, credit a rather solicitous mother for that. Our house stood at the corner of a common lot, owned jointly by two other sisters of my father. While one sister had also built her residence flushed to one side of our house, the other sister who lived out of town left hers vacant. This became our playground, the only playground for nine kids bursting out of a house that measured only 100 square meters. In the middle of this vacant lot was an old tambis tree, whose age we never bothered to find out so long as it kept bearing fruits when its season was due. As maybe a giveaway for its ancient age, beside it was an old rusted and overturned steel safe that served as planter. It was a remnant of the last war, we were told.

With nine kids composed of 5 precocious boys one can bet that that mute and unmoving tree must have endured some form of abuse from the boys. And it did. I can recall that in instances where I pretended to be the famed swashbuckler Errol Flynn, I would do battle with the unmindful tree, thrusting into its gnarled trunk whatever I had in my hand that passed as sword or rapier. I can even recall using a big Moslem kris that I threw like a knife into its fleshy trunk and not being satisfied until the perfect throw landed the bolo’s tip deep enough into its trunk to quiver and stay in its place like in the movies. Who cared then about the welfare or life of that living flora. So long as it bore fruit when its season was due.

Because when its season was due, it was laden heavy with those luscious fruits, from the low-lying branches to the topmost skyward ones that must have towered two-storey high. The fruits surely were very tempting even to a pre-teen who could not rely on old siblings to do the picking.

So learning to climb that tree was the big challenge, a much more visible and urgent challenge then than learning to ride the big bike of an older sibling. Naturally, the first attempts were tentative and limited to the low-lying branches. But like most things in life, acquiring the most temptingly delicious ones involves more risks and dangers, and more scary heights. Thus a summer or two may have been devoted to the process of acquiring the expertise, but more importantly of generating enough nerve and courage, to climb to the lofty branches where those huge fruits seemed to arrogantly challenge my puny attempts.

The conquests were very exhilarating, and rewarded amply with very juicy fruits that went deliciously well dipped in table salt. Pretty soon, climbing that tree was second nature and the tree itself appeared resigned to its fate, bearing fruits that were easier to retrieve. Though at times unsuccessfully attempting by subtly hiding some of them in the thick foliage, playing a failed hide and seek.

Thus, the once mighty tambis tree of my early youth became the lowly tree of my teens, scarred not only with the ravages of time but with the many unheralded conquests made at its expense.

When my father’s sister decided to build on the vacant lot, that tree was the first to go, trailed behind by the old steel safe that must have been given away or sold for its scrap value.

From vacant lot to spanking new house, the memory of the old tambis tree faded from my memory, replaced with the many more worldly cares and recklessness of teen youth.

Until this day, when the heat of the sun joined by the fruiting season of the tambis tree . . .

November 30, 2012, today found an old picture showing part of the tambis tree of my youth, located on the right side of this picture.  This was our old house where we all grew up. 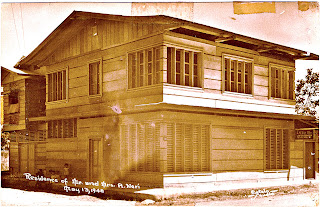