A Personal Critique On Popular Blogs and Their Commentaries 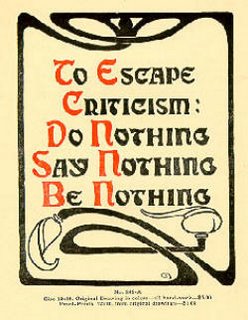 As I intimated in a couple of earlier blogs, one of my avid avocations when I get the opportunity has been to cruise around the obstacle-ridden racetrack popularly named as the blogosphere and like the proverbial fly on the wall to scan through the different entries and the often juicier commentaries allowed. And some popular ones can typically boast of upward to 200-300 comments in one post. Quite a few registering over a 1,000 comments. Very good traffic figures, indeed. If that’s the paramount target.

But personally, I find the present prevailing format quite cumbersome and exactingly confusing, no different from having to wade through thick clutter to get at the gist of where things stand. Granted most everybody in the blogosphere have ripe opinions about most issues and are avidly and readily expressing them.

But what about those who simply want to read and learn from the discussions?

Blog surfers are invited to visit some of them to get a taste first hand how at times wading through the main blog entry and the ensuing commentaries, and at times updates on the main entry, can be a very daunting task especially for visitors severely restrained by time limits or maybe suffering from some kind of attention deficit.

Especially in hotly-commented sites, when one enters in the middle of a discussion, no thanks to time constraints or time differentials, one feels no different from having stumbled into the middle of a fierce gunfight. Think OK Corral. Bullets are whizzing by every which way, not really knowing whether they hit the targets or not. Or whether they are simply stray bullets fired from a gun and not really intended to hit any target. Just shots fired.

And most riveting blog entries no doubt are floated out to stir up and to engender wholesale animated discussions on controversial or hot-button issues of the day.

How are the readers helped in their dilemmas, problems, unease, nagging questions, etc. about the differing issues that are being propounded?

Personally, I believe many are confused and none the better off than when they initially chanced upon the discussions. I know that’s how I feel at times.

Many blogs, not unlike a number of those listed on the links on the right, have simply abandoned the idea of allowing comments after their entries. Aided in their decision by the nasty development of having commentators using the ready access and space to litter with indecent, defamatory, silly, at times outrageous remarks. And there is also the universal problem of spams forcibly inserting themselves and littering blogs through comments.

Now, wouldn’t it be nicer to have some kind of order to this madness, for maximum penetration and effects?

Some organized format so that those coming in at any point of the discussion can easily grasp some sense of direction and purpose of the discussion. And in the process learn and be educated.

Many are familiar with the debate format which makes provisions for a more orderly and dispassionate discussion, analysis and assessment of different and differing issues.

I propose we make accommodations to use this format or something similar to it, incorporating such salient components as a list of “givens”, a little intro on the realities in which the question exists, a definition of terms and issues to frame and limit discussions/commentaries to relevant points, etc.

No doubt a welcomed departure from or a modest improvement on the present free-wheeling, open-thread type discussions that permeate and contribute to the gathering disorder of the entire sphere.

A healthy development for this much-touted salvific interactive medium.
Posted by Amadeo at 2/21/2006 02:19:00 AM No comments: