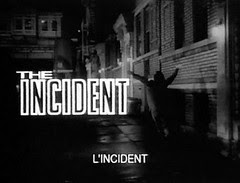 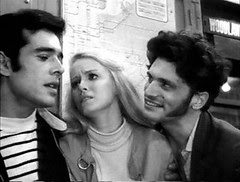 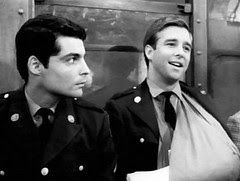 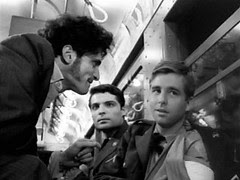 Yesterday afternoon, while preparing to reheat overnight foodstuff for a late lunch, the wife decided to channel-surf and ended on a rather dreary beginning credits to a black and white film, quite obviously from some distant past.

After several night-time scene cutaways astutely showing a motley group of people agonizing and trying to cope with their personal problems, I had lamely asked the wife to move to another channel. Like the one showing those grand old Westerns shot in those wondrously beautiful locales in the Old West.

But she had calmly persisted, more to show who's boss rather than having a special liking for this dark film, which I did initially think was a film noir by some obscure film-maker.

Anyway, decided to bear the expected ennui and sit quietly intent on finishing the meal remnants.

Suddenly, after more dreary scenes which put together started to shed more light on the locale, a sudden bolt of recall came to my consciousness. Scenes of overhead trains, remnants of the old El in New York. Train stations scenes with familiar turnstiles and ticket booths. The different characters slowly but surely being drawn to a train station, very late in the night or very early in the morning.

And suddenly, the vague recollection from some distant past gelled into something recognizable and communicable. Thus, I blurted out: I have seen this movie as a younger man and at the end one of the soldier passengers, his right hand on a sling, is going to be knifed by a hoodlum on the train, because he is the only one brave enough to confront evil.

Indeed, the film was The Incident by Larry Peerce, and made in 1967.

For the curious, one doesn't need to rent the VHS which came out in 1989, I learned.

For this blogsite has most of the skinny, with liberal sprinkling of screen captures from the actual film, over a hundred of them. And some audio clips and the actual musical score.

It featured a cast of characters many will recognize even to this day. The soldier with the broken arm was played by Beau Bridges, son of the late Lloyd Bridges and elder brother to Jeff Bridges. A young Martin Sheen, playing the noisy but cowardly punk. A young Donna Mills, pretty and blond. Then old reliables like Gary Merrill and Jan Sterling. Even host Ed McMahon was in it. Yes, he acted before being known as a TV host. And evil personified played well by Tony Musante, a face you love to hate. He played a queer character in Sinatra's The Detective. Director Peerce is known more for his TV works, Wild Wild West and Batman.

Why was this memorable for me, thriving latently in some forgotten corner of my memory all these years?

Because it exposes in graphic clarity the classic confrontation and mortal combat between pure, pristine, and humble "good" against a pure and unmitigated incarnation of "evil".

Furthermore, it also exposes the very thin and easily breached veneer of polite and civilized society. How when we are faced with actual evil, we find ourselves not up to the challenges that we thought we could easily and proudly surmount.

We find ourselves playing uncharacteristically the role of "appeasers" of evil, exerting utmost efforts to play "safe" against evil. Both assiduously and frantically trying to parry and deflect all its attempts to harm us personally and somewhat hoping it moves elsewhere to cast its ugly spell.

In the end, in spite of being hobbled and disadvantaged by man himself, good triumphs using the same means evil uses - violence.
Posted by Amadeo at 12/27/2006 11:34:00 AM No comments: