Today is the 50th anniversary of the integrated circuit invented by Jack Kilby of Texas Instruments. Since its inception it has revolutionized so many of the old gadgets that we had used and the modern ones that we are using today.

Thinking about it today, immediately our attention turns to our computers sitting in our laps or desk; and recalling the past we think about those bulky and hot vacuum tubes that hid lit inside our radios and phonographs which were quickly replaced by the IC. Then we had the commercial explosion of the transistor radios.

But today try to look around your house and see, apart from your PCs, modern appliances, and digital watches, what consumer and/or business gadgets you still have that would be a throwback to an earlier period of IC use?

I looked around and found this, which to this day is still being used to do some simple math calculations such as addition and subtraction in reconciling bank statements: 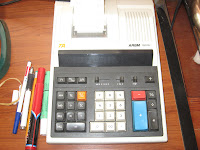 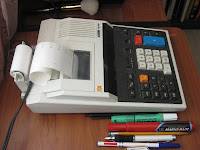