Why the World Hates Donald Trump 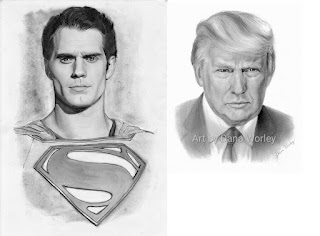 In one Superman movie, sweetheart reporter Lois Lane pens a Pulitzer-winning piece entitled,   Why the World Doesn’t Need Superman.  And we learned later that this curt dismissal stems deeper than her reporter’s ken.  Superman had left her emotionally hanging without a good-bye, but laden heavy with child.  But the movie ends with Superman back to his crime-fighting ways with the world back to his side.  Up, up and away!


Now it seems the world has already penned its own poison piece against this outlier of a president, Donald J. Trump.


Every time I read or hear criticism about Donald Trump, a panoply of emotions rush to try and take control of me.  At times it is the uneasy feeling of amusement especially if coming from people I truly believe ought to know better.  At times it is simply irritation, maybe because of the shrouded pettiness of the charge.  At times frustration that not much earnest effort had been expended to know and understand underlying intent on statements or actions coming from Trump.  In these chaotic times, it is a big challenge trying to discern the truth from fiction, especially because the revered institutions that people had relied for so long appear to have abandoned their impartiality and fairness. And at times, nonchalance or disinterest, maybe because really, the loathsomeness against the man appears consumptive and contagious.  And maybe, there are more latent emotions rushing to find expression.


Anyway, I thought maybe I ought to find out why so many loathe the guy, almost like every other person on earth is expressing similar feelings. So here is my list of the reasons why Trump is so hated.


Almost to the man or woman, from top to bottom all members of the Democratic Party show their disdain at most anything and everything Trump does.  Especially true to the real ideologues in the party of which there are many and in control.  They could not imagine in their wildest dreams that this annoying parody of an accomplished and strait-laced politician or statesman could win against who they perceived as a very accomplished and seasoned candidate, though admittedly with a very checkered past, but a woman at that.  But lost they did, and in a manner decorated with so much drama and aplomb. And so the hate fest begun.


Trump was never a politician, and never even pretended to be one and thus never even tried to exhibit the nuances expected from one.  He was simply an unrefined and hardened businessman nurtured in a very brutal place like New York.  And I believe because he won being himself, he found no extenuating reasons to materially change his personality in his new role as president.  And thus many including those within his own party do not find this acceptable or commendable.  And thus in this great number, Trump finds many detractors, some vocal while others are silent.


In many respects, Trump the outlier candidate still has not awakened to the fact that he is now the President of the strongest and most influential country in the world, and with it, as Spiderman declared, comes great responsibility.  Thus in many ways Trump the President continues in his merry wayward ways like he still is the reality TV guy, forever aiming for higher ratings and feasting on the global attention, which many will say all feed into his outsized ego.  And many polite and erudite members of the establishment elites of all sectors cannot forgive him for this blatant shortcoming.  And they have not been sparing in their lashing at him at every turn.  Trump is only lonely man at the top!


And most of all, many loathe Trump because of his bad manners and at times the glaring absence of politeness or reservation.  Many in politics or other high places also exhibit bad manners, but nobody is President like Trump. The hate is aggravated thus when they see him displaying bad manners as President which office is supposed to symbolize everything virtuous about the country.  This is regardless of whether those we criticize him truly believe in all these and practice them in their lives and roles.  They just hate him more.  And Trump for his part is almost completely oblivious of this, and will not even make token efforts at redemption or reparation.  He is just Trump being Trump.  The hate fest continues, grows, and engulfs a good part of the globe.


And oh, they hate him because of his “collusion with Russia” on the election.  At this point everything is still perceived and hearsay because after over a year, nothing to bolster the claim has been revealed or leaked by the special counsel.  Save for some indictments, only vaguely related to the charge.  And in the meantime, several high-ranking heads in the DOJ and FBI have come out of the chopping block, pointing unerringly  to the ugly presence of what many call the Deep State.


Meanwhile, what has his presidency done to the country, which is what he was mandated to do in the first place with his historic election?   The electorate after all was not looking for a saint, but somebody to put the country back on track given how much it has strayed from its committed goals.


All the good stuff listed below are necessarily put alongside the performances of not only the immediately preceding administration, but even beyond because some of his numbers are staggering.  And where does one begin?


Unemployment at historic lows, from all sectors of the populace, for all minorities.  Overall labor participation soaring.


The once anemic economy is moving at a fast clip.  In GDP increases, markets, etc.  Very significant tax cuts had immediate unexpected effects on the economy

Regulations that were emasculating many sectors of the economy were reversed or eased up to allow them to grow. An industry or two dismissed as on the extinction path have been revived.


No. Korea and other traditional adversaries or competitors are suddenly amenable  to come to the negotiating table.  And to enact fairer provisions and concessions.  Etc.


The Supreme Court now poised to strictly interpret the Constitution, rather than having it legislate from the bench in an activist fashion.  Just what the majority of the electorate would be comfortable with.


And there are more, some more discernible, others stealthily moving in our midst.


Overall, Trump has delivered on the promises he made to the electorate.  And though very sharp divisions exist within its rank, still that is how things move in a democracy.


The bane of Obamacare that festered almost since it was passed was somehow defanged when no palatable replacement could be proposed by the ruling party.   The democrats had even used it as a viable platform issue during the last election.  And by and large it has moved to the plus column for them given the results of the election.
And yes, everybody including past presidents was for the wall and border security, until Trump decided that he too wanted to get along.  Now, he is the racist and isolationist.

But how will this nightmarish milieu end?  Who knows!