Revisited: Get To Choose: France or USA? 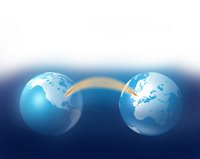 In their utter disappointment of the USA and what it now represents as perceived by them, a good many of my former compatriots in order to push deeper their expression of this discontent and disdain had put forward the thesis both in print and blogs that France as a country was a much better choice than the upstart USA. Not only as a country but also more determinedly as a place to migrate. This need to exit is in keeping with their serious pursuit of noble personal aspirations that now seemed distant and difficult to attain in the old homeland.

To be fair and to present a more balanced view, I had gathered together in an earlier blog polite arguments not only favoring the other side, but expressing certain doubts about whether a fair and impartial comparison between the two could be feasible given the very subjective nature of many of the criteria advanced.

But present developments specifically in France may make even more evident where the favorable verdict should lie. International media have been ablaze for the straight 10th day in its unrelenting coverage of the rioting and dreadful vandalism that have gripped first the dark underbellies of French communities but which have now spread to its showcase city, Paris, the vaunted city of lights. And from media indications there appear no clear signs of the unrest abating and getting curtailed by authorities.

Needless to state, this boils down to civil rights issues of France's burgeoning minority communities, most notably its Muslim population. These invariably are the practitioners of Islam, which religion whether wittingly or unwittingly has become the wedge in Western civilization's united campaign against terrorism.

We grant that any such societal unrest where violence and destruction are inevitable consequences is always to be condemned and not condoned. Society is never served well by such cancerous onslaughts on any community's peace and security. Civilization is pushed backward by such displays of uncivilized behavior.

Thus, the world should be in unison in condemning such atrocities, where issues, whether political or social, are sought to be redressed by wanton destruction and gratuitous vandalism.

But the USA especially can't help but recall how France collectively had derided its attempts as feeble and irrational when it was laying out what it viewed as earnest and good faith justifications on why the world through the UN should move to forcibly oust the Baghdad despot.

How well we recall the emphatic lectures given by French officials on why the US should heed its anti-war advices, France being the competent authority on such matters. It pointedly referred with obvious pride to its own efforts in dealing with its own minorities, which are comprised largely of Muslims. Now, we are once again treated to the cliché that sometimes the past may come back to haunt and bite you.

Now new converts in media are singing the tune that this flashpoint may signal and usher in more similar disruptive incidents in other countries of Europe which have now been rudely awakened from their somber slumber of denial to this gnawing threat. We read earlier snippets about this in the Netherlands. We know that good ally, England, has minority populations in its own shores in conditions mirroring those in France. What about Germany? And those little safe haven countries trying not to court world notice with their own homegrown social issues?

The future does not look well, especially if the rest of the world continues to be scattered and fragmented in the urgent drive to erase world-wide terrorism which is a direct threat to all of civilization, in all countries.

And like it or not, or whether PC or not, we have to unstintingly bring our efforts to bear on the breeding places of terrorism where our fact-finding fingers have inexorably pointed to.

We must address that cancer before it critically metastasizes to bring down the global body politic.
Posted by Amadeo at 11/06/2005 11:10:00 PM No comments:

An Acknowledged Phenomenon In The Blogosphere?

Punditry or opinion writing has always found comfortable and adequate expression in the blogosphere from its inception. Its continuing phenomenal growth can be argued as being powered and sustained by this innate desire to opine and to search for proper media to express them. OpEd pages are arguably the most read or visited sections of any printed or on-line paper.

We can surmise that there must be countless sharp minds, honed through many years spent in either academia or profession, floating out there in the firmament, many with time, talents, and pen to spare, to devote to this punditry. And the blogosphere has been picked as their proper and easily accessible forum for such grand cerebral exercises. Where every eager participant is allowed free and ample clean slate to create masterpieces.

It can also be argued that many opinions expressed in the countless blogs sprayed across the broad extent of the blogosphere are about the things that are socially, politically, or economically impacting the different countries in the world.

From my many incursions into blogs, I can safely say that many are of this orientation and motivation. Forming opinions about what is wrong about the country and what steps to be taken to bring it back to the righteous path of prosperity, equality, and equity.

In my old homeland, it has almost become the favorite national pastime for pundits and opinion makers to dissect and analyze all the political and economic ills of the country and to mentally erect their individual theories on the best paths back to recovery and prosperity. It may help rationalize this by pointing out that the country at present suffers from what might rightly by judged as record negative findings in the areas of poverty, corruption, social discontent, etc.

Thus, dissertations about these readily grab the rapt attention of many readers because these dire conditions directly affect many of the same readers. On the part of these attention-yearning pundits, a veritable field day ensues to try to come up with the most riveting prose that can both stir the emotions and the minds of many to devote eyeballs to their sites or papers.

Some go beyond by framing their theses in gilded books of both hard cover and paperback. Without question such products enjoy brisk sales nowadays. Many consumers are interested to devote time and money to purchase their works, so they can sob and heave in the warm embrace and comfort of astutely interwoven prose and buzz phrases or ideas.

And the local blogs and media are littered with such punditry. Many are adulated, widely read and listened to, and accorded high places in the hierarchy of important and influential people in society.

But to me, there is one other equally patriotic and noble group that does things less flattering, less attention grabbing, less appealing, and maybe less valuable before the eyes of the general public. But most probably, can show more and better results. This is the group that most likely decided early on that the best approach to the path to recovery and prosperity was to put shoulders to the plow, investing whatever meager time and resources to the many little economic activities that when taken together equal the local economy. And in the larger context, the entire country's economy.

These are the people who believe in the cliché that change to be meaningful and sustainable must begin one man at a time. That to effect change, we begin with each person, giving each the opportunity and the means to economically uplift himself.

These are the people who believe that trying to singularly grapple with the entire onus of the country's ills, both real and perceived, is to guarantee failure. That to wait for a miracle may be wistful thinking, at best. Or that to expect great followings simply because your hypotheses stand tenable to great logic and scrutiny may be unrealistic.

These are the people who believe that thinking grand schemes and plans are good in theory and on paper. But may take generations to translate to implementation or good results. Or may likely all fall by the wayside due to indifferent neglect or inattention.

These are the people who believe that solutions are never neat and easily categorized, nor capable of being put to cadenced and orderly prose. Good ones are usually messy and randomly chaotic, and typically do not follow standard expectations.

These are the people who accept that workable solutions do not necessarily invite good public attention and approbation, nor produce spectacular results. It is sufficient that they end up with good and productive increments that taken on the long haul can produce meaningful changes.

One wonders if this group can get sufficient attention for and coverage of their endeavors in the same blogosphere that appears to idolize the other kind. Their number could be just as numerous and pervasive as the present anointed darlings of the blogosphere.
Posted by Amadeo at 11/06/2005 11:01:00 PM 1 comment: