On the Street Where We Used To Live 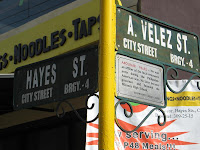 Growing up in a sleepy town of 50,000 inhabitants (though it was already a chartered city even then), we resided on an A-frame timber building nestled flushed to the corner of two main streets aptly named then, Del Mar and Victoria. The former leading straight to the pier area some three kilometers due north, and the latter purportedly because it originated from City Hall, two blocks to the west.

Decades later, the immediate neighborhood has more than undergone changes to the street names. Del Mar is now known as A. Velez St, while Victoria is now Arch. J. Hayes, both named after prominent residents of a celebrated bygone area. 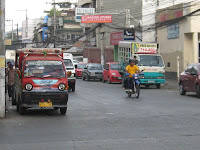 The more visible and drastic metamorphosis has been in its usage, from decidedly residential to a mish-mash of commercial establishments ranging from eating places of various orientation, to laundry places, to noisy disco places, and include there, to itinerant hawkers populating some sidewalks. 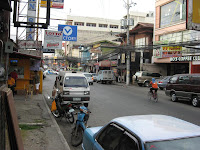 And Hayes St. has now also become a busy jeepney route, for destinations bound to the western part of the now thickly-populated city of maybe a million inhabitants.

Needless to say, the streets are abuzz daily with people and vehicles assaulting one’s senses to at times uneasy frustration and disquiet. 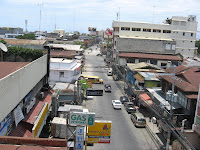 From the quiet familiarity and comfort one then felt as a child gravitating around the welcoming nooks and crannies of our little haven, we are now daily contending with the messy hustle and bustle of an unfamiliar and isolating environment. At times feeling like one is sleepwalking through a place now only vaguely familiar. Reminded by its past and floods of old memories upon sight of recognizable old structures engulfed and overwhelmed by ugly cosmetic face-lifting undertaken to accommodate their new more profitable uses. 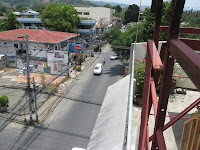 Thus at regular intervals as some form of cathartic exercise, I prod tired feet to climb challenging and punishing stairs spiraling through five levels of a commercial building. And in the solitude and breezy comfort of my “observation deck”, I survey a city that I used to know and hold dear, and pretend to be transported back to the idyllic times of youth. And there are still enough familiar structures and roads to facilitate the pained recollection. 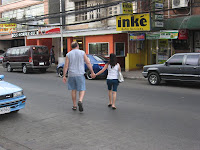 Time marches on I know. But old remembered memories are hard to simply drop by the wayside. Besides, old memories are so safe, uncomplicated, and uncluttered. With no dangers of going wrong and thus, resulting in accountabilities to be shouldered and suffered through. Again.

So easy and effortless to dismiss or set aside, as climbing down the stairs when one is done “observing”.

This is the old house that sat at the corner of Del Mar and Victoria Sts. It was demolished in 1989, but the house next to it along Victoria St. still stands to this day. Both were built in the late 1940's. Notice that in the first picture the lot across the street is still vacant. This is the site of Pet Hong Trading. 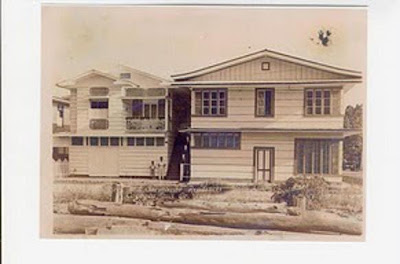