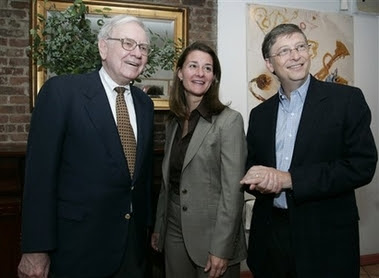 My favorite link on Philippine Economics, Go Figure, ran this piece May 15th,
The biggest charity of them all:

I thought the biggest charity would by far be the Bill and Melinda Gates Foundation. It's certainly the most famous. But The Economist found the biggest of them all - the Stickting Ingka Foundation.

The what? Amazingly, it's the nonprofit foundation that operates all the Ikea stores.

I'm a bit sad. I have always promoted and extolled the altruism of Bill Gates through his gargantuan foundation. This revelation may induce me to write him a letter to recommend that he transfers some of his personal stocks to the foundation, so he can get back to having the world's biggest philanthropic foundation. What's another 10B dollars out of a personal fortune of about 60B dollars. HeHeHe.

It was this last device that was most noticeable in the letter he sent this week to the Bill and Melinda Gates Foundation. In it he pledges an initial "material" contribution of shares in his investment company worth about $1.5 billion (£824 million) and then adds that over the next few years he expects those contributions to reach an "eventually substantial" sum. I suppose that only in the small world occupied by Bill Gates and Warren Buffett could a personal gift not be considered "substantial" until it rises well above $1.5 billion towards the $30 billion the donation is expected to reach.

The generosity of Mr. Buffett puts the Sage of Omaha in a rare class of the greatest American philanthropists in history. In narrow financial terms, and translating large donations and legacies of the past into current purchasing power, it is certainly up there with those of the Carnegies, Rockefellers and Guggenheims. Unlike theirs, Mr. Buffett's generosity is literally self-effacing. The great contributions that wealthy Americans have made to educational, social or cultural betterment, including that of Mr. Gates himself, have usually come at one small but enduring price - eponymity.

For comparison, Unesco, the United Nations Educational, Scientific and Cultural Organisation, distributes about $700 million. In Britain, the Department for International Development channelled about £4.2 billion in aid to less developed countries.

Two American philanthropists alone, in other words, will have contributed more to alleviate poverty and disease than the UN's principal development arm. Between them they will have given a sum amounting to about a third of the entire official UK contribution. (Underscoring mine.)

No other nation on earth has the capacity to produce individuals with the wherewithal and the motivation to extend such generosity.

Although official aid is famously lower in the United States than in most of the industrialised world, Americans are, of course, more inclined to give to charity than is almost any other population. Last year they contributed a little over 2 per cent of their gross domestic product, compared with 0.7 per cent in the UK. Of course the bulk of US giving is directed at domestic needs, much of it in the form of giving to local communities and churches. But that doesn't detract from the sheer scale of American generosity. Why is it so large? Income distribution presumably plays a role. Inequality has risen dramatically in the US in the past 25 years. The top 5 per cent of households made more than 21 per cent of total income in 2003, up from 16 per cent 40 years ago. At the very top, the growth in income has been even more spectacular.

Too much can be made of this. It's often forgotten in debates both inside and outside the US that America has some extremely generous expensive social insurance programmes. Social Security, for example, the public pension system, is actually rather more generous than many in Europe, including Britain's. But there's no denying that in terms of their own perception of their relationship to the State and its role in their lives, Americans are substantially different.

Because the comparison made with the Ikea owner in the original article highlighted by Go Figure was not really serious with regard to their serious philanthropy mission, this bit of news should make even bigger the already undisputed biggest private philanthropic organization in the world.

It might serve us better to remember the next time we are tempted to gratuitously trash the US, that these two distinguished persons are Americans, too.

And to end on a lighter trivia. It was also reported that Mr. Buffett will bequeath to his children the not too generous sum (according to him) of one billion dollars. But as I distinctly recall when Bill Gates just had his first son, he also made a similar announcement. And for how much? His was for a more frugal inheritance, something like 25 million dollars for his son.