A Personal Look At The Current US Economy 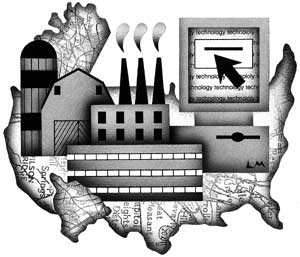 Having now lived a total of 4 months since the start of this year in the old homeland, two points of personal observation stand out markedly in the local scenes.

First is the frenzied and incessant discourses both in media and among educated and interested local residents of the hot-button political flashpoints that have mesmerized the collective consciousness of a nation, gripped in some kind of political addiction that stubbornly refuses to be shaken off. Wherever one strays, or whatever printed materials one can come across locally, or whatever one sees or listens to on cable TV or radio, the riveting topics are about the many egregious manifestations and ramifications of politics as conspicuously played out both locally and nationally.

Next is the almost desperate and hopeless tone of the somber discourses on the state of the Philippine economy, ironically not in the usual areas of GDP, productivity, dollar reserves, etc, since their figures are quite encouraging, but more on the areas of pervasive poverty and ignorance which have cast a very large and ominous pall on the collective moral soul of the entire country. The various partylist causes and protests are a good representative, avowedly all done in the name of the poor and dispossessed. And by association, in the name of the ignorant masa, who it would appear can easily be led into causes that at first blush lack depth and careful study.

But I have observed with some degree of consternation and wonder how it is that these same sources, both media pundits and local educated elites, can discern so much about local politics and the adverse social conditions brought on by flawed economic policies and practices, yet are almost functionally illiterate about the current state of the US economy.

Many media pundits and many of my relatives and local acquaintances are both very articulate and incisive about local economics and usually have sufficient intellectual capital to make reasonably informed judgments on the politics and its practices of other countries, most especially the United States. The same sources are never at a loss of scholarly comments and opinions about the political actions of leaders of other nations and their local impacts.

Yet one can surmise from their commentaries and other public statements that at the very least, they are most disinterested in the US economy, though fully cognizant of how interdependent the US economy is with the rest of the world.

Ironically, one could probably surmise with some certainty that the US economy and the way it works is the primary reason why many of our compatriots can find the resources and energies to move heaven and earth to try to land a visa to the US. I doubt that US politics ranks high in the reasons for emigration.

When media pundits in the local press blurt out the cliched comment when asked about their incendiary kibitzing on US affairs that, when the Pentagon sneezes, the rest of the world shakes, it is precisely its allusion to US politics wittingly and unwittingly having worldwide repercussions.

Yet the state of the US economy and its economic policies may just be as crucial or maybe even more, as any of its political maneuvers in impacting the rest of the world, both for good or bad.

Given the above, maybe detailing some concise facts about the current US economy may aid open the gate for more serious and thorough reading and learning by the locals of an economy that from all comparative analyses works, albeit warts and all; and more appropriately, an economy that "when it sneezes, the rest of the world shakes".

First and foremost, one sterling quality of this economy which many knowledgeable persons ordain will continue to carry the US through centuries and any bumps along the way, is it free markets. Considered among the freest in the world, it has garnered many enviable records along the way. To mention one, since 1991 it has registered positive GDP growth, and in decent percentages for most periods but surprisingly vibrant in some instances. This, amidst most unusual and costly times, formidable vicissitudes that could easily stagger and down any economy of lesser caliber and resiliency.

The march to progress of this economy is also reflected in ways that benefit its consumers:

Reports of increasing labor productivity among other things could gauge the overall status of the workers within this economy.

With the above, we have been shown that overall household wealth is up.


And aligned with the above, we also have been shown that per capita consumer spending is up.

Leading to the concluding data that the number of rich people in the country has also been raised significantly.

But for the coming year, now only a notch away, this lumbering behemoth faces some tough concerns on the domestic front. The more important ones are enumerated below.

The US Housing Market - Soaring prices of houses in the entire country but more pronounced and unbelievably astronomical in some hotspot areas like California, New York, and Florida, have gone unabated for many years now. Many are now judging this as a bubble, ready to burst any time now. Without a doubt, the added equities on houses have fueled more consumer spending greatly boosting overall economic activities. If indeed this is a bubble, what would happen when it bursts? Many possible dire effects are easily identifiable.

Job Insecurity - While at present unemployment is down at 5%, considered full employment level by many, there continues a growing reality of job insecurity. A very real or possible consequence of globalization, which has spawned outsourcing.


Downward Trend for Real Wages - While labor costs indices continue to show increases, real wages have actually been stagnant. Funny but inflation is being kept down by keeping track of and trying to hold down labor costs.

Public/Private Pensions - The baby boomers are ready to retire in masse. And social security could go bankrupt if not reformed.


The Health Care System - Does not cover enough citizens and rising costs have to be controlled to continue to be affordable.


This economy then has to respond to the following pressures occasioned by the above and by forces extraneous to it:

Rising Competition From the East - China and India. Economies of both are growing in leaps and bounds. Soon they will be on the same size levels as many of the big economies of the world like Japan and some countries in the European community. We have seen how the unprovisioned surges in oil demands of China have wracked havoc on world crude prices. Even the Internet, which respects no geographical boundaries, is a major threat.

Shortfalls in Pension Funding - The day of reckoning is sooner than anybody thinks. Proposed SS reforms were shelved because of strong opposition, especially the part on "private accounts".


Global Financial Markets - To be competitive this economy will have to keep costs down,

Health Care Costs - Skyrocketing costs will have to be curbed.

Some possible recommendations to keep this economy going on its merry path.

Continued Good Monetary Policies - A new Fed chief will take the helm come January. One re-alignment move this new chief will have to confront is the mistaken notion that the Fed is the elixir of all the nation's economic ills. Because it is not. Other major branches of government will have to share the burden, in such areas as runaway expenditures, reckless fiscal policies, etc.


Prudent ways will have to be found on how to adequately fund pensions, both private and public, without necessarily running to the ground those companies that have to carry them. Tax hikes? Prudent ones, maybe. And reforms to the present SS system will have to be re-introduced and passed before they are too late.

And lastly, government's borrowings as percentages to GDP appear to still be sustainable over the short haul. But over the long term, more borrowings especially from foreign sources will have to be curtailed, since they may not be tenable. Those trillions of dollars in instruments held by foreign countries like Japan and China may not in the long run bode well for the interests of the US. Government deficit spending is primarily accountable for the ballooning public debt.
Posted by Amadeo at 12/01/2005 10:34:00 PM 2 comments: