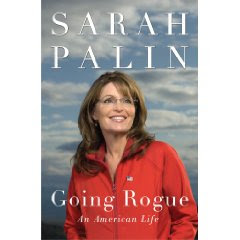 Bloggers are abuzz with the news. Sarah Palin has rushed publication of her book to reach the stands before the holidays. It is expected to hit the stores November 17th. Reports trickling in show that advance sales have pushed the soon-to-be book to Number One. I suppose on-line places like Amazon are sourcing these reports. And the very amazing thing is that the initial printing will be at 1.5 million copies. Wow!

Her many detractors in media and politics have to be giddy with puzzlement, agonizing on occasion how a blithering and irrelevant idiot (their words) could command such an audience to listen to her on print. And this time not for free, for now they have to shell out almost $30 if bought from a bookstore, or half of the price if ordered on-line. But that is too kind, maybe they are just livid with rage why some nobody like Palin could weave words together and have people read her. Maybe the purchasers are just naïve, or easily manipulated? Or too ideological? But the title of the book suggests she is not beholden to any side.

One hopes that the book is more than just an autobiographical primer of the life of Palin, rather that it should also expose in good prose who Sarah Palin is and what she truly stands for. And some concrete plans on how this country can be put back on track, if perceived to have been derailed. Yes, it ought to contain honest and earnest accounts on the last contentious presidential campaign amidst the many internal controversies and adverse claims between staff and candidates. I hope she truly goes rogue, and expresses what she truly feels and believes about the many events ushering her abrupt debut to the national stage.

If not all these and more, then what is to differentiate it from the two autobiographies penned by the current WH occupant?