Vignettes Of Life In A Busy Intersection 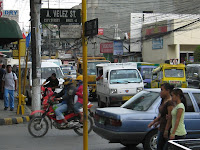 The north-south main city thoroughfare originates from the pier area, cuts through the busy poblacion area, and winds down south and merges with the ramp leading to the city’s newest concrete bridge. Across the river and beyond one is brought either to the old western part of the city, or further up in elevation to the newly-developed upscale uptown where many modern subdivisions have sprouted.

The east-west crossing street passes through the city’s busiest marketplace area, through the biggest Jesuit university this side of the big island and ends at the other end skirting another old school run by nuns. This arterial is the official route for public utility vehicles bound for the western part of the city, crossing over the oldest steel bridge of the city.

Imagine then the craziness and chaos that daily visit this benighted intersection, old and two-lane narrow and peppered with indiscriminate parking on both sides of the street. And of course, the otherworldly traffic behavior of both motorists and pedestrians.

But daily its pulsating and chaotic pace goes unsupervised, unmindfully moving countless vehicles and unfazed people to their appointed destination. Solicitous mothers with uniformed children in tow. Rowdy clusters of students out of school, some bound for home and waiting for their rides, others simply sauntering about enjoying their friends’ company. Office workers labeled by their nicely-tailored office attire (suits for ladies and polo barong for gentlemen) gingerly making their way through the mess. And a bunch of permanent fixtures like watch-your-car boys or itinerant vendors forming part of the landscape. And scores of other players that daily find themselves with roles in the many interesting vignettes of life in this busy intersection. Like the many assorted business establishments with their employees lining both sides of both streets. 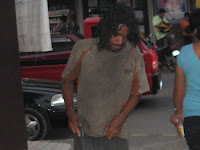 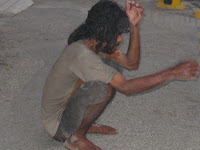 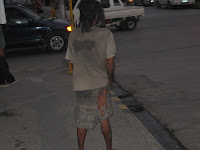 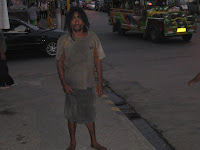 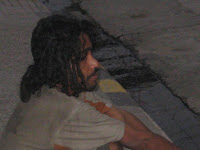 A daily spectacle, for its unavoidability factor, is the unnerving sight of this buang, vernacular for crazy guy. Who on regular occasions strips himself butt naked and unashamedly walks around surveying his domain, that is, the busy intersection he has decided to call home. He literally lives off the street, sleeping and functioning in that environment, feeding himself from scraps in garbage heaps, and never straying far from this intersection. And the weirdest part is that he never accepts voluntary offers of food and clothing from passersby and residents. He would rather forage and scavenge. In a recent foray, police authorities had carted him off in their lorry. But a few days later he was back on his beat, none the worse, or should I say none the better.

The story is that once this was a lucid man unfortunately hooked on the local drug called shabu. An overdose may have likely brought him to this stage. He has not acted violent, unless threatened or talked down. So people simply leave him be. Ladies and small children simply turn their gazes away from him especially during his bare days. And on occasion unruly or uncouth men riders or passersby shout teases at him, impishly sneering while doing so.

But one can see that amidst all these, this man lost in his own world does not mind.