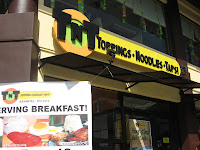 That is how it is called locally. For a little over $1.42 one is served up with slices of fried-pink Spam (the genuine, the original), egg over easy, and a cupful of garlic rice, and finally topped with a little refreshment of iced tea.

For many Filipinos a breakfast of this sort has been traditional fare as far as I can remember, believe it from a proud somebody who used to be called “Spam” boy by a now dead cousin as fitting tribute to my uncanny ability as a kid to consume a whole can in one sitting. A satisfactory start of a nice morning would have been after a hearty meal of fried rice, eggs cooked in lard, and crispy fried Spam slices. 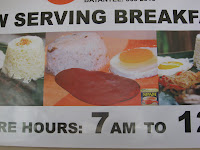 So this new local eating place breaks new ground by reminding patrons about this once popular menu, by now offering this breakfast selection as one of the tempting choices of other traditional breakfast fare such as smoked fish, longanisa, and tapa, the last two being sausages and smoked beef.

We knew even then given the unlikely, or maybe even unseemly, origins of Spam, that Westerners looked with askance at this staple. After all, Spam became famous as part of GI ration during WWII. Invented and marketed by a Hormel heir precisely for “hard times”. During war or before that during hard economic times like the Great Depression. The poor man’s choice of a meal.

With the now unraveling of the global economy with even more and harder times being forecasted, what should come to the rescue?

The lowly Spam, originating from one of Hormel’s factories in Austin, Minn. Production has never been better and at a more furious pace, with employees doing double shifts or overtime work to keep up with the increased demand.

And unlike the Spam of old, one can now pick one’s favorite from an adequate selection – such as Spam Low Sodium, Spam with Cheese and Spam Hot & Spicy. And don’t you know you can also buy Spam retail – that is, packed as one slice per plastic wrapper? Averaging under $2 per can, imagine how much one slice would cost.

Thus, while the bad economic times have re-introduced this food for hard times, the Filipinos never entertained any such low regard for this product. Good or hard economic times will always be a happy time for Spam – especially for breakfast. Thus, while Westerners may derisively refer to junk email as Spam, no such dark thought lurks in the Filipino psyche. 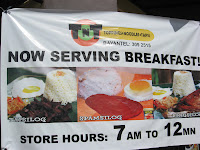 What about Spam dipped in a batter of beaten eggs before frying and cooked in good old very hot lard?

Stray Thoughts On A Cloudy Day 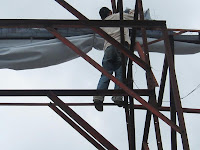 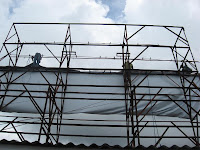 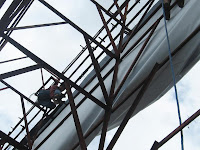 When angry winds buffet, timid and fragile sails are furled.

Or so we were told or saw in the many sea-faring movies of old.

Thus, too, this last Friday harried workmen started rolling up the giant billboard hanging on the roof deck of our building.

When queried why this new-found solicitousness over a coming little wind and rain, they cheerfully said that storm signal No. 1 had been hoisted by the local government weather forecasting station, aptly called Pag-asa (literally meaning hope in English), ominously presaging the rampaging onslaught of a good-sized typhoon expected to hit the area that Sunday. And from their explanation, one gathered that the weather station has now been tasked with informing billboard owners when storm signals are up to allow them ample time to take precautionary measures, like rolling up their tarp billboards. So caught a team of high-climbing trapeze artists nimbly clambering the steel structure to unhitch and secure their billboard. In less than an hour, the huge “sail” was securely tied up on top casting a very tiny profile for any angry wind to maul.

A good precautionary measure indeed in a country that is regularly visited by disastrous typhoons, which unwelcome natural calamities almost always bring considerable damage to structures and infrastructures. Blowing away very exposed billboards and their frames has been a commonplace occurrence, sometimes causing also human deaths.

As a relieving end-note, Sunday came and the sun shone mercilessly throughout the day, nary a drop of rain or a wisp of air to blow away a lit candle.

As usual, weather forecasting at its level best. No better, or worse, than a throw of the dice.

One’s face is usually unerring testimony to the ravages of time and the catalogue of deeply wrenching emotions felt over the years. Leathery or botched skin, wrinkled temples, furrowed foreheads, and more, are what we carry to our graves if we live to be of ripe old ages. These are inevitable and inherited signs of man’s living of life. We can usually not only tell a man’s age by these markers, but how easy, comfortable or difficult one has gone through life. And repetitively doing specific physical activities as part of one’s life usually leaves visible marks in one’s body. A stevedore, or mason, or a carpenter will typically show the accumulated results of their trades in their bronzed and well-developed arms. A doctor, especially a surgeon, maybe by his dainty and exquisite hands and arms?

Aside maybe from a gaunt overall physique, what else does a long-time inveterate jogger or brisk-walker exhibit? 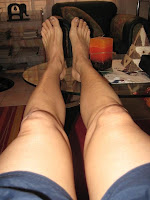 Well, after over a score of years of jogging, here is what I can show to the body parts that I use most prominently running or jogging, usually on hard pavement. 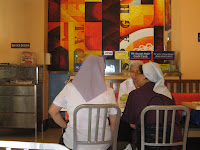 When nuns gather for a noonday meal at some fastfood center in the mall, you can bet that it will be a happy and holy refection. Caught in a pancake place, of four Assumption nuns taking a little respite from their campus outreach ministry at Xavier University.