Unsung Manongs In The USA

We still remember from dog-eared history lessons the “waves” of Filipino worker migrants or sacadas wrenched from their hardy homelands and transported to continental USA to work in its agricultural fields. An agricultural industry that was perpetually in need of more field workers as the awakening voracious appetites of its burgeoning economy commenced to flex and make known its intractable demands for more products.

Thus, many of our ancestral compatriots, trained in and culled from the harsher environments of the still primitive agricultural and almost pastoral economy of a dislocated country, willingly extricated themselves from close familial traditions and idyllic rural areas to cast their lot in a strange land 7,000 miles away.

Since this happened during the currency of the American colonization of the Philippine archipelago which ended in 1946, many of these early immigrants have passed on, mostly unremembered and the remaining few living obscurely in their adopted homelands. Many unable to “return” to their homeland of origin because of financial constraints or because having been gone for a long, long time any nostalgic remembrances of the past have been consigned as simply hazy and detached figment of some distant best-forgotten past.

Thus, regardless of how life in the new land dealt with them, many stayed on, carved new lives and relationships for themselves, and ultimately in a manner of speaking, fertilized the same land they came from afar to make productive and in the process assist them eke out lives for themselves.

I choose today to spotlight two of these unheralded persons, both Ilonggos (coming from the Visayas islands of either Iloilo or Negros), whose own lives touched ours in the same arena where we too as a family had decided to cast our fortunes in.

One of them died a couple of years ago, at the ripe old age of 93 years. The other one is still alive, living in a new for-seniors high-rise smacked in the middle of Daly City. However, apart from both being Ilonggos, no two people could come from very different beginnings and present circumstances. 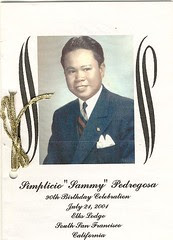 The first one was Sammy, formally christened as Simplicio M. Pedregosa. I and the wife had spent countless hours with him during a period of at least two decades. The association first came because he and his German wife, Frieda, were clients of the wife in the bank that she worked. Later on, I started doing his taxes. Since they married very late in life, they had no children and when Frieda died, Sam lived by himself in the same house they shared.

Here’s a little backgrounder, written by a very grateful and youthful family member already born in the US, during his 90th birthday celebration in 2001: (Sammy had been very instrumental in bringing almost his entire family to the US, though he had returned to the old homeland only once after he had initially left.)

The strength of a family lies in its roots. Strong roots enable the family tree to grow, develop its branches, and bear fruits. From a distant land many miles away, the seed of our tree came, and took root in American soil. Our family tree stands strong and proud because of its roots and the way its seed was planted, with hardship and sacrifice.

Our tree started as a seed in Iloilo, a province of the Philippines. It was in this rural town that Simplicio Pedregosa was born on July 24, 1911. At the age of 16, even before he could establish his own roots, he decided to travel to new soil. It was clear to him that he must move in order to perpetuate his existing family, as the soil of his homeland was not rich enough to allow him to grow.

In sending him to America, his family made a great sacrifice. Pawning the farm, their source of livelihood, was the only means of raising money for his fare. Realizing that sacrifice is important for his growth, they made the deal and sent Simplicio on a boat to America in May 1929 with a hundred dollars in his pocket. It took 30 days of life on the sea before he could touch American soil.

From the port of San Francisco, Simplicio went immediately to work on the celery fields of Lodi, CA. Although diminutive in stature compared to his American counterparts, he persevered physically on the field. For every hour of his labor, he earned 10 cents. Despite his meager wages, he saved his earnings for two months to send to his family back home, as restitution for his family’s initial sacrifice. His sacrifice allowed his family to grow in his native soil, fostering better living conditions for his parents and his younger brother and three sisters. After months of hard labor, he resigned his job at the farm to obtain an education.

And so Sammy spent his remaining youth in pursuit of his dreams. He had served in the armed services of the US and later worked for the Post Office, where he met his future wife, who was also a first generation immigrant from Germany. And success for Sammy was all we hope for and more. Two very valuable RE properties close to the SF Zoo, very adequate pensions from his employer and SS, a nice and quiet family life, and a life laced with altruistic endeavors for both family and good causes.

Let me just summarize as his unofficial accountant that Sammy when he died was worth several million dollars, mostly liquid assets. What most of us would hanker for and may not be able to acquire.

But for me personally there was one aspect of his life few may remember including his intimate family members, and maybe even Sammy himself. This I initially gathered when we started discussing about his stint in the US Navy.

For when WWII broke out, Sammy enlisted in the armed forces of his new adopted country. And as was customary during those early unenlightened times, only certain low-ranking positions were opened to immigrant enlistees or draftees. In short, Sammy became a cabin assistant of an admiral in one of the ships of the US Navy.

Turned out, it was no ordinary ship. It was the USS Missouri, led by the commander of the fleet, Adm. William F. Halsey. The same ship that cautiously sailed into Tokyo Bay when Japan sent out surrender feelers. And where Gen. MacArthur and his aides would board to sign the surrender terms with his Japanese counterparts. 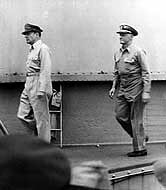 Recalling his own unique eyewitness account of the entire proceedings, Sammy in his usual dispassionate almost dismissive way, told us about where he was and how he felt, and how his admiral’s demeanor was. With full convoy streaming into Tokyo Bay, the admiral did not really know what awaited them as they approached land – Japanese land. He had probably thought that the Japanese could not be trusted. Pearl Harbor was a stark reminder. Thus, the stiff standing order for the entire fleet was: Battle stations! - with all armament ready for any hostile move.

But fortunately for the world, things as planned all fell into place. Japan was reconstructed and is now the economic power second only to its primary benefactor, the US.

The other Ilonggo is still alive and will continue to remain anonymous, other than the initials, L.M, to protect his and his family’s privacy.

Anyway, L.M. came to the US post-war. He started his young life as a personal chauffeur for one of the patriarchs of the few financially powerful families in the Philippines, the Lopez family which is deeply involved in media. L.M. recollected the start of his employ with the late Eugenio Lopez, Sr. as his personal chauffeur in the Visayas and then Manila. He was particularly struck and impressed by the unaffected simplicity, gentleness, and egalitarian personal traits of his employer. L.M. was even surprised that he got his job given his very limited educational attainment and his very humble origins. And the old man trusted him very much that when he moved to the US for an extended stay, L.M. also trudged along as his chauffeur.

Since, I know next to no one about the Lopez family, other than that they had a huge estate along Dewey Boulevard, close to Manila’s boundary with Pasay, I had asked L.M. about it. He confirmed that fact and added that many stately affairs were held in that place for local and visiting dignitaries.

Anyway, after his employ with the Lopez family ended here in San Francisco, L.M. was left to fend for himself. He continues to have family members left in the old country which he yearns to visit. However, at present L.M. only has sufficient resources to keep him here, which sources would be cut off once he leaves the country. When we were still residing in Daly City, I and the wife used to go see him and at times he would walk to our house which was nearby for a visit. Again, our association with him started because he was a client of the wife. And we have always valued it since then.
Posted by Amadeo at 1/27/2007 03:56:00 PM 2 comments: