Teaching The World To Sing

It is a well regarded belief that the world defers to the human singing voice as the most wonderful, and maybe most enigmatic, musical instrument of all time. The world appears not able to get enough of it. Even when assembled hordes of musical instruments in a philharmonic orchestra hum in unison to the tune and cadence of a musical composition, almost always the human singing voice is added as the central focus. Thus we have the solos, whether in popular music or in operatic arias.

And to this day, the dulcet human voice still is the center in most musical renditions. On Broadway. In the many arenas of heartland USA where concerts are held.

Man has at times elevated singing to profound heights, at times catapulting it to almost spiritual or mystical crests.

And time was when most men, those who couldn’t find or afford public forums or those not possessing the gilded voices of a few blessed individuals, would resort ingeniously or resourcefully to other means to satisfy their cravings for practicing the high art of singing. Be it in the homely bathrooms, in the solitude and privacy of their own abode. In isolated places where one could only count the lowly animals as likely audience. And most other places and arenas, where one is shielded from public scrutiny by solitude. Resulting in most instances in one having to sing a Capella, with nary an audience other than the echoes of one’s voice bouncing off one’s own ears. That is, singing without any appropriate accompaniment, the necessary companion for singing.

But because to sing properly and adequately, one needed the services of other people. People who could play musical instruments to accompany one’s singing. No doubt many otherwise promising songsters of the past may have been frustrated in their ardent desires to discover, develop, and practice on their singing. If only to perform decently during family gatherings or during outings with friends. Or to be quite frank, to appeasing one’s at times insatiable ego pursuing its own capricious whims or warped sense of self-expression. And why not?

Anyway, in the late 70’s this public and universal craving started to be addressed in an inauspicious manner. People in the business of music, whether selling recorded songs or selling musical instruments, started looking for ways to make available to the public at large devices that would allow even those who were not musically literate to have access to services which were necessary for singing, whether personal or public – the musical accompaniment.

Recorded accompaniment which did not have need for live performers. In comparison, one is reminded of those now ubiquitous synthesizers, which in their most technologically advanced stages can create virtual orchestras. But all absent the attendant necessarily exorbitant costs required to cobble together those electronically intricate adaptations, and all within reach of your typical consumer, the one used to singing in the bathroom a Capella to satisfy his innate craving for musical expression.

Thus, came along the sing-a-long, or now more popularly referred to as karaoke, devices in varying sizes and dizzying arrays of technology. 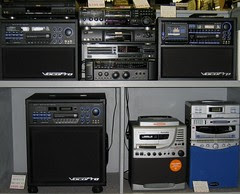 But its origin is somewhat unclear and not clarified, though unquestionably, the word itself, karaoke, is Japanese in origin and the more popular perception is that indeed this started in Japan.

But a credible challenge, though not really brought into the forefront and publicly asserted, is that of a Filipino inventor who held a couple of patents to a device(s) that pretty much mimics the present-day karaoke machines.

And the corresponding timelines may reveal a bit as to who can fairly claim authorship.

Compare and make you own conclusions.

Regarding the history of karaoke, here’s what Inventors.About.Com has to say:

Roberto del Rosario described his sing-along system as a handy multi-purpose compact machine which incorporates an amplifier speaker, one or two tape mechanisms, optional tuner or radio and microphone mixer with features to enhance one's voice, such as the echo or reverb to stimulate an opera hall or a studio sound, with the whole system enclosed in one cabinet casing.

Here’s what Wikipedia has to say in turn, batting for the Japanese as the originators:

Karaoke (Japanese: カラオケ, from 空 kara, "empty" or "void", and オーケストラ ōkesutora, "orchestra") is a form of entertainment in which an amateur singer or singers sing along with recorded music on microphone. The music is typically of a well-known song in which the voice of the original singer is absent or reduced in volume. Lyrics are usually also displayed, sometimes including color changes synchronized with the music, on music video to guide the sing-along.

Karaoke has been a popular form of entertainment beginning first in Japan, then the rest of East Asia, since at least the 1980s, and has since spread to other parts of the world. Karaoke engenders quite a bit of culture specific to its enthusiasts, and this culture, unsurprisingly, varies from country to country.

The karaoke industry started in Japan in the early 1970s when singer Daisuke Inoue (Inoue Daisuke) was asked by frequent guests in the Utagoe Kissa, where he performed, to provide a recording of his performance so that they could sing along on a company-sponsored vacation.

That aside, karaoke, in its many manifestations and spin-offs, has rapidly spread world-wide, and has electrified both the entrepreneurs and consuming public.

Now, it is both commonplace and ubiquitous. In nightclubs, in bars. And it has even spawned a business industry all to its own – businesses where the main product is karaoke singing. And karaoke singing contests, too, have evolved.

And like most things touched by and tinkered with electronic technologies, the karaoke machines have undergone tremendous evolutions in its short life span from the 70’s to the present time. From the crude lumbering sing-a-long machines to the sleek hand-held portables that one can now purchase most anywhere consumer electronics are offered. Of course, for the avid cannot-be-satisfied technophiles, there are very sophisticated and technologically-loaded machines that can do much anything that can be done in studio, save duplicating the voice of the original recording artist to be copied, mimicked, or imitated.

Or maybe not, in the very near future at the very least. Because I read about a machine that can now translate one’s recorded voice to come out much like the recording artist one wants to imitate.

After all, it is now commonplace for speech patterns to be tracked, analyzed, and recorded. Thus, the next inevitable step would be to duplicate those patterns. Of course, this news came from Japan.

So expect pretty soon to be able to not only avail of the unique musical arrangements that your favorite recording artists record in, but also electronically imitate his vocal cords.
Posted by Amadeo at 10/26/2006 12:58:00 PM 4 comments: