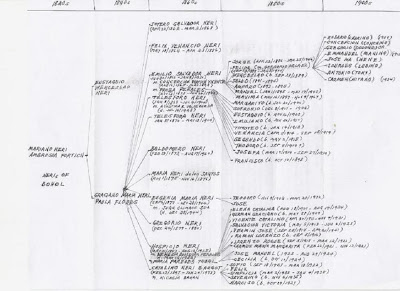 Presented herewith is a more detailed graph of the origins of the Neri’s of Bohol, its earliest progenitors dating back to the early 1800’s.

Confirming our earlier data as plotted out in the earlier genealogy blog on this site, this branch’s known ascendants start with the union of Mariano Neri with Ambrosia Fortich in Bohol.

All the new data here were taken from an Excel file which based on the format and entries must have originated from the heirs of Felipa Neri who married Gregorio Pelaez, Sr. in the town of Medina, Misamis Oriental. It should be noted that in our first listing the data came from the family of Romulo L. Neri, the two branches sharing the same lineage.

This early it should be emphasized again that the descendants of Mariano Neri still cling to the belief and oral tradition that the family of Mariano Neri originally came from Mindanao. It is no wonder then that his descendants started waves of migration back to this southern island, Felipa Neri and her siblings being good examples of this migration.

Here are some personal observations culled from the new data provided by this graph.

A common thread we find is the size of the families listed.

Sps. Graciano Neri and Paula Flores produced 11 children. But 3 of these children died early: Sotero at 6 years, Maria at 1 year, and Gregorio at 1 year.

In the next generation, Emilio Salvador Neri, who married twice, sired a total of 16 children. But 5 of them died early: Salud at 3 years, Amparo 2 years, Sofronio 1 year, Venancio 5 years, and Josefa less than 1 year.

In the same generation, Hospicio Neri, who also married twice and from whom Romulo L. Neri’s family originated from, had 10 children. But very surprisingly, 7 of them died very early or at early adulthood – Elena 17 years, Vicente 20 years, Salvacion 10 years, Fermin 27 years, Lorenzo 4 years, Carmen less than 1 year, and Jose 1 year.

With this more detailed rendering, it is hoped that those Neri’s, especially those with origins in the Visayas, seeking connections can somehow hook up with the names listed here.

NOTE: Subject for confirmation, based on the graph coming from the family of Romulo L. Neri, Mariano Neri/Ambrosia Fortich had four children: Eustaquio, Wenceslao, Graciano, and Maria. Rather than only 2 as plotted out by this current graph.
Posted by Amadeo at 11/22/2010 09:20:00 AM 7 comments: