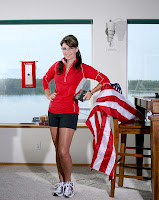 Fresh from a revealing interview with Runner’s World which is accompanied by an impressive pictorial(many dainty desk-bound lady pundits and politicians would die for), Sarah stuns anew the political world and the kibitzing blogosphere with the unexpected announcement not only not to seek reelection as governor of Alaska, but to resign from her current term – effective within a few weeks.

Not one used to taking the beaten path this surprise move by Sarah, shrouded in a bit of mystery and vague in the actual reason(s) for its abruptness, has thrown the political “establishment” (from all sides) into a writing uproar. Memeorandum is hard at work cataloguing the items devoted to scrutinizing and analyzing this sudden turn of events.

Expectedly, the pointed pens of grossly obsessive detractors have been blindly thrusting at anything that moves – ranging from a rehashed rumor that an indictment is forthcoming against Sarah, to parsing and diagramming the written text of the rushed announcement.

But to date nobody can point a finger to what exactly is the reason(s) that prompted Sarah to make such a pivotal announcement on the eve of July 4th and the start of a slow-news weekend.

But wherever the chips may finally fall, as a supporter of Sarah we stand by her, because of what she stands for us.