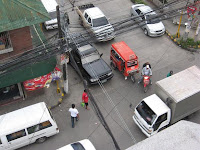 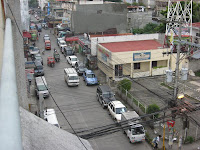 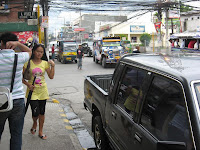 Road courtesy and internationally accepted standard traffic rules are literally being driven off the road in the bustling city of Cagayan de Oro, in Northern Mindanao. Populated by at least a million folks(Hey, nobody really knows what the exact population is!), expected to survive in cramped quarters in a smallish poblacion traversed by grid-iron type city streets which are noted for their being too small for vehicular traffic but too wide for use as pedestrians sidewalks, which pedestrians use as such anyway. And the width of any street is immaterial anyway because it is not the reason why drivers do not observe common road courtesy. Drivers will use any unoccupied strip of any street, whether it is intended for parking or striped-laned for going the other way. If it is currently unoccupied and the vehicle can drive through it, then the green light is on to snake through that part of the road or sidewalk and be on its merry unmindful way. Any traffic enforcer be damned.

But here is a little recommendation, just be extra careful about negotiating no-left turn intersections. Doing so catches the wary attention of any traffic enforcer nonchalantly observing grid-locked traffic on the intersection. For some strange reason making a wrong left turn is worse than engaging in a coarse game of chicken and by so doing jamming the intersection from all directions. And another is going through one-way streets of which they are many which are not marked with clear traffic signs and thus easily unnoticed. These two actions appear to be anathema to them, notwithstanding the clear as day fact that there are other violations much worse traffic-wise unraveling before their very sunburnt noses. Like double parking on an already narrow street with both sides parking, or loading and unloading of passengers from public transport anywhere the passengers so please. 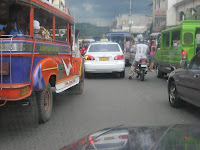 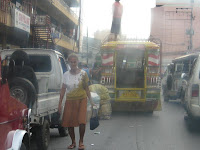 In a city where anything that can roll and move can be par for street use, negotiating traffic is not only daunting trying to weave and dodge from errant four-wheeled vehicles, but is equally confusing in trying to identify the objects one is confronted with driving along its streets. Never mind the pedestrians, since they are everywhere anyway – walking, idling, conversing, phoning or simply existing or living on both sides of the road. And by the way, you also find them in the middle of the road, precariously teetering on top of the disregarded median lines, arching and aching to cross to the other side of the street.

But the “vehicles” you encounter are truly a motley group, some defying what could be described as motor vehicle or typical human transport. Admittedly, there are the two-wheeled common enough bicycles, but outfitted or resourced as either a cargo carrier or as a place of business. Resourcefully converted in various ways and configuration aimed at being able to carry maximum load and volume. Think of any possible way to do that to a bicycle and you bet it has been done and implemented. Same is true when used as a place of business – complete with a counter top and storage space to conduct any itinerant business whether in food service or selling of pastries, or whatever.

Then there are the lumbering carts, mostly too bulky to be pushed or tugged by a bike, that are simply pushed around by humans through the streets of the city, searching and angling for leftover street or sidewalk space fit enough to park and conduct business.

Then you have the motorized bikes, wrapped in tin sheets to look like their four-wheeled cousins, used as public transportation, ferrying passengers for as short a distance as a city block away. Lazy residents? The heat in the tropics does discourage any leisurely or even brisk walking most days. And this mode of transportation is literally everywhere. Every Juan or Pedro who can buy a motorbike, even a cheapo made in China, and outfit it with a tin-can cab, has one. If not, then every Juan or Pedro who can borrow money to engage in this type of transportation business has one. Looking at their numbers one gets the crazy feeling that they must propagate like rabbits.

And the mother of all traffic hazards and road courtesy ne’er do wells – the passenger jeepneys in their multi-colored ugliness and challenged models of inefficiency in function and looks. They daily invade every motorist’s space and peace. Loading and unloading everywhere and anywhere the drivers’ fancies direct them. Flouting every possible traffic rule or road courtesy, causing the equally ubiquitous traffic enforcers to quietly exclaim in frustration, or simply show the disinterested look. They do at times flag down jeepney drivers and issue tickets appearing as a semblance of order amidst the wholesale chaos engulfing them.

Another equally hazardous presence on the streets is that of taxi drivers who do their share to merit their dubious distinction as reckless drivers and cheap teasers of fate. At least with their new and shiny units, one gets the sense that they at least have the earnest desire to prevent any contact with other vehicles since they would most likely end up as clear losers in the damage department. But again their big presence on the streets is cause enough to be extra careful in one’s unorthodox driving. And the exercise of precise care in approaching intersections since the concept of right of way is almost alien to them, practicing only the primeval chicken game in approaching and taking intersections. He who dares fearlessly and aggressively and shows no tentativeness gets to drive first unimpeded to the next intersection.

Another group of vehicles is noted more for their non-visibility than their ability to obstruct one’s view of the road traffic. These are the tiny or mini cars coming from China and Korea. Diminutive sedans with their one-liter or less engines stealthily weaving in and out of columns of vehicles, and uncannily parking themselves neatly in left-over spaces in a city where such spaces abound. Again their new shiny looks and basically tin-can body frames make their drivers extra cautious in preventing even the softest of fender-benders. 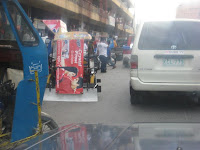 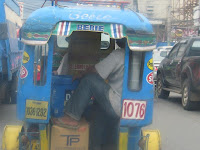 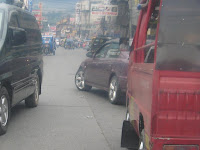 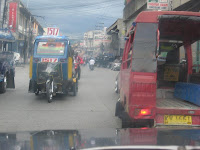 And shades of images of the US freeways and suburban cities are the out of place presence of huge SUVs like the Ford Expedition or the F150 pickup truck, and the popular family transport of recent US lore and yore, the minivan or full-sized van. Being status icons here proud owners are only too willing to maintain them and go through the rigmarole of driving them around constricted city streets – with great unease and discomfort. Hey, no different from some women who wear shoes with skyscraper heels after being aware of the ill effects of their wear to their feet and legs and also feeling some excruciating, I surmise, discomfiture in simply wearing them. But for them pride is in the ownership.

So for those who have to drive to get around, be forewarned and be prepared in this demotion-derby environment, minus the actual collisions. Gear up to be optimistic and think of it as being a bump-car ride, where even collisions and minor scrapes are simply causes for fun and entertainment, and one is none the worse for wear and tear after each experience.

Over time, one actually learns to appreciate the experience. After all, actual disastrous contacts are far and in between and common experiences are mostly minor paint scrapes or minute body dents, and maybe bruised egos for some. Yet In the excruciating process one learns to pay utmost care and undivided focus to one’s driving.

Which is what most credible experts who teach proper driving techniques recommend anyway.
Posted by Amadeo at 11/11/2008 05:19:00 AM 11 comments: