The careening new technologies disrupting our once rustic life somehow bring us back to the bygone days of youth when things were a lot simpler and coarser.  When life somehow was easier to understand and live.  Now with dizzying speeds we are hard-pressed even at keeping pace with the consumer technologies available out there.

Noticing beyond just the physical characteristics our gadgets and their almost limitless capabilities to connect us virtually with a world well beyond our physical reach, we begin to realize and wonder about them juxtaposed with the simpler things we had then.

Yesterday, I woke up to the realization that with the smartphones I possess. Yes, I have several yet not one of them is equipped to connect me telephonically with the rest of the world.  Said differently, none has a local SIM card or with load purchase to allow access to other cellphones.

All details aside, this thought brought me back longingly to the time when I was still a college student at XU-Ateneo de Cagayan, which would be in the mid-60’s.  I faintly recall being approached by somebody, am not sure if it was Jesuit priest or a layman, to continue with the practice of broadcasting the 7am Sunday Mass at the XU chapel via the reaches of the local premier AM station, DXCC.  A sweet and serious offer that an avowed Atenean could not refuse.  It was made known to me that the one initially assigned to do it would not be available anymore, so the need to find another.  Okay, I said, and so what is next?

I was handed a brown folder with a few worn pages of script inside.   It was essentially a summary of the typical Mass, from beginning to end, from Entrance Hymn to Final Blessing.  The job was simply to provide audio when the celebrant would remain silent going through the different phases of the Mass.

It was then my responsibility to assess if the documentation was sufficient for my purposes, and more importantly, to present myself to the DXCC technician, who would be responsible for setting up the system to allow the regular broadcast.

Had to rewrite the whole script and armed myself with good reading materials to fill out radio silence during the services.  Met with the DXCC technician who fortunately was already familiar with me, a few minutes before the start of my first broadcast.

So dutifully every Sunday before 7am we both met up at the left side of the XU chapel.  He laid all the wirings and the mikes to be used for the broadcast, while I located myself on the same side close to the altar, holding on to my folder with the script, and the few prayer books I brought along.

This we did with almost no fail for at least a year and maybe closer to more, going to the air at the appointed time and place and reaching to all who tuned in to the radio during that time.  The Holy Sacrifice of the Mass and its message of redemption propagated far and wide to the devotees unable to be physically present.

And all that time, we never received any feedback to apprize us of the work we were doing.  Not an iota of comment or emoticon to a Facebook page or other social media.  Complete radio silence.

And just as hazily, this work stopped, and everybody concerned went about their separate ways.  And I am just left to wonder, how crude and limited methods were then to disseminate data and events to the people at large.  Worlds apart from the ways we now handle such things.

That same smartphone that most people, from all strata of society, now possess in their hands, is now capable to do what we once did with great attention and labor, and a lot more, simply with a few clicks, tender taps of the fingers over the screen, etc. 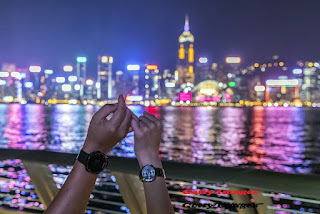 One outstanding thing is how the HK movement has been able to galvanize the citizenry to gather in very large numbers even with a very loose organization whose leaders are not even clearly known.  It gathered at one point 1.7 million people on very short notice, almost a fourth of the total population of the island of about 7 million people.  Tech-savvy residents have created their own networks for communications and dissemination.  Thus we hear buzz words like mesh networks or Telegram, etc.

How could anyone ignore the numbers?  And more importantly how could one not realize the stakes involved?

In the world of finance, HK is the third most important global financial hub,   behind only London and the US.  It cannot afford to be destabilized for long, without deleterious repercussions worldwide.  The tense rumblings are definitely undermining this pivotal role in this Asian locale where English is a primary language.

It is an inevitability that in 2047, HK will truly be molded as part of Mainland China, as per agreement reached in 1997, and it will be ruled by the Communist government like any other part of China.  Once done, HK will lose its financial prominence because the major Western powers will never allow itself to trust in China.  But why should HK be any different from any Chinese city?

But first a little trivia.  Before the ascendency of China as a looming world power, the Communist government had eyed HK with great avarice because HK’s economy or GDP then was comparatively huge compared to that of China. But in the meantime China’s many big cities blossomed and became modernized and prosperous amidst a riotous economy that was burgeoning to the point that now, HK’s GDP contribution would not mean that much, maybe representing only 10 or 15% of China’s total.

But the bigger problem is HK itself.  HK became unique HK because of the uncanny combination of the Chinese people’s intrepid nature and their entrepreneurship genius mixed with the vaunted British Common Law.   That inimitable combination produced HK, and we know this would become untenable once HK becomes part of the Communist regime of China.  Rule of law as known in the West will be alien then, and the HK generations weaned on this cannot survive.

Even with just this, one can easily grasp the mammoth dilemma that HK truly finds itself.