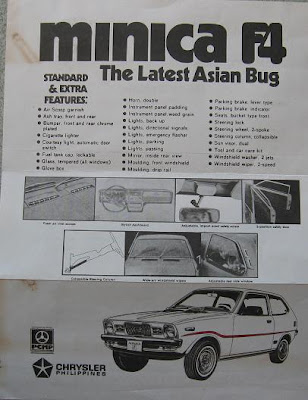 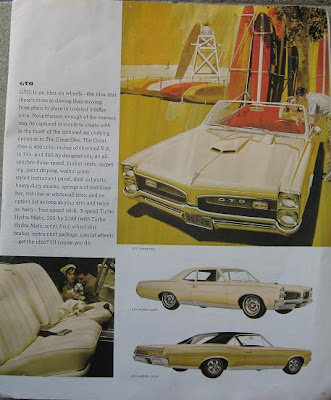 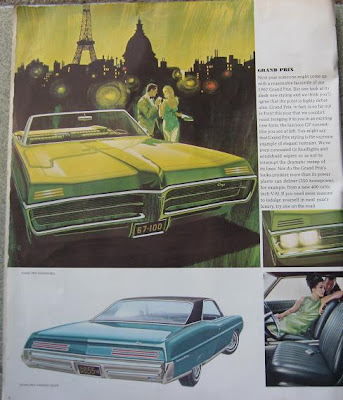 These pictures taken from old brochures have become telltale signs of Detroit’s three big automakers' ominous future, culminating in their maybe going to the bankruptcy chopping block if not rescued by a bail-out. For this non-prescient but hindsight observation, I went through my trusty time-capsule files of the 60’s.

Thus while Detroit was then devotedly churning out huge monsters like the GTO, Bonnevile, Caprice, Grand Prix, etc, upstart Japanese automakers were silently promoting to market their tiny little cars that could not even be allowed on US freeways due to miniscule engine size and other basic standards. As small as 360cc engines but able to seat 4 passengers. Mitsubishi’s Minica was an early forerunner in the Asian markets. Honda did come out just as early with its Civic but focused on the US markets with their heftier engines of at least a 1000cc.

In a real way, the 60’s also shows the world’s cluelessness, or maybe just inattention, about the need to conserve existing energy sources and/or aim for more efficient uses of energy. Because many dismissed these actions by the Japanese as simply the manufacture of oversized toys, not good enough as acceptable human transport. But Honda successfully marketed their earlier versions in the US, promoted primarily as “second” cars, not the main transport for the family or the parents.

For me, I actually purchased a Minica, but the earlier version of the one pictured here and imported completely assembled from Japan. It kept its value well, since I was able to sell mine more than 2 years later for almost the same price as the purchase price.