Filipinos and US Politics

To the average urban Filipino the topic of politics is often a passion-stirring and hot-button issue, eliciting many avid responses from participants. In friendly family gatherings, or extemporaneous congregations of acquaintances, and most especially in the various forms of media, politics assumes a very focal role, almost like as default features to enliven pages and sell copies. Its discussions are always lively and keenly partisan and in many instances do escalate to shouting matches or ad hominems. No wonder then to this FilAm who visits the old homeland quite often, the question of politics is often asked – US politics, that is.

Compatriots are quite eager to learn how their own kind behaves as political animals in other countries, countries they have adopted after leaving the old homeland.

They are not mistaken to assume that indeed there are many ethnic Filipinos in the US, both legal and those who have decided to stay beyond their temporary visas. Many place the count to as many as 5 million though official stats would probably show their total closer to 4 million plus.

So the typical questions asked revolve around these. Is there a Filipino vote? How do US politicians regard and/or court Filipino votes? Do Filipinos have clout in US politics or in the political process?

But they are usually nonchalant or downcast when they learn of the real lowdown. They assume wrong that their compatriots in foreign lands behave similarly or as intently as with their local counterparts.

They are quite perplexed that there is not even a category of Filipinos in the US demographic/ electoral rolls. That Filipinos are lumped together in the category of Asian Americans which is quite a small category numbering a little over 15 million in a country with a total population of over 300 million. Among others, Asian Americans include Filipinos, Chinese, Japanese, Koreans, Vietnamese, Indians, Pakistanis, etc. No doubt a very broad category net that catches and bundles together many minorities in the US. From the figures above, Asian Americans make up only about 5% of the total population. Comparatively, African-Americans number 38 million while Latinos top at over 44 million, unarguably the two fastest growing minorities in the land.

While the total number of Asian Americans appears substantial, these immigrants are not that active politically. And are thus said to be quite invisible politically. This group has the lowest proportion of eligible voters, a little over 50%, compared with the populations of other racial groups. Plus, only about 50% of eligible voters actually register. Translated that would be about 7 million eligible voters and about 3 million actual voters. And how many actually vote during elections? Having over 50% of registered voters vote is considered typical in presidential elections and as low as 40% in state elections. Another negative factor for Asian Americans is that only 60% know English, thus many shy away from or shun active participation in politics.

No wonder then that while Asian Americans represent 5% of the population, only 1% of them count among those holding elective offices.

What about party affiliations? In this group a third are registered Democrats, another third Republicans and the last third are unaffiliated or may be registered as Independents. And for the last third, more than 50% were born overseas and thus, politics has not yet become a priority in their lives.

Except that Asian Americans congregate in great numbers in some states. And in order of the size of their presence, they are: California, New York, Texas, Hawaii, and New Jersey. So this may be where they could influence elections and thus be a future force to reckon with.

A most recent special election result may reveal this to be true or may be the inauspicious start of a trend. We refer to the most recent special election in the 9th congressional district of New York to replace disgraced Democratic Congressman Weiner. This district is ceded to be predominantly Jewish and may explain the election of Weiner, though as a Democrat he probably had a lock on it given that Democrats had controlled this district for many, many years. But take a look at its current demographic distribution (2010):

In an ironic twist, though expected by the polls, a Republican took the win on this heavily Democratic district, a district once held by Democratic stalwarts Geraldine Ferraro and now Senator Charles Schumer.

Without delving into the issues that may have driven this sudden change of wind, what could have possibly happened in the voting?

A given for this district is that Asian and Hispanics have historically voted Democratic. Now taken either singly or collectively, these two groups could have provided the swing votes to change the current history of this district. In this election the actual margin of win for the Republican against his Democratic rival was 6 points (53-47).

Thus, in a race where two white candidates dominate, two minority groups with sufficient numbers could have provided the impetus for the upset. That factor could have made possible an almost political improbability.

It is to be noted also that Asian Americans are trooping in great numbers to some battleground states like Nevada, Minnesota, and Virginia, so the future could see this third-largest growing minority assume more active and decisive political roles.
Posted by Amadeo at 9/19/2011 10:44:00 PM 1 comment:

Email ThisBlogThis!Share to TwitterShare to FacebookShare to Pinterest
Labels: Philippine Politics, US Politics

US Breaks Some Records

US breaks some records. 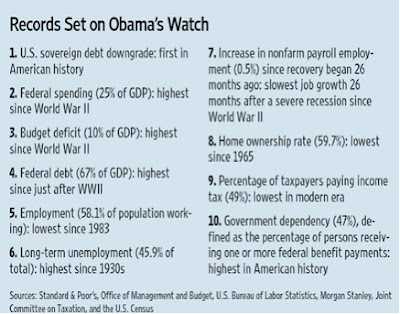 This is definitely one instance where the current recordholder would gladly cede the honors - to another US president, or any man or woman for that matter.

Imagine if we allow him to take on a second term. Following the trends, he would start breaking his own records!

If in grave doubts, scan the sources below the list to erase any.

Bits and Pieces of Memory from an Era Long Gone: Elvis and Me

It must have been early 3rd year high school when Elvis broke into our local scene. First, it was the song, I Want You, I Need You, I Love You, that blared out of an early morning show of a popular local DJ. That was our first vocal introduction to the world of Elvis. We had then caught glimpses of blurred images of him performing emblazoned in some foreign news items included in our local papers. Then an elder brother brought home a “songhits” booklet that featured a black and white close-up image of the mysterious upcoming singer with the brassy singing style. It was not a pretty picture. He had on almost like a scowl, or exaggerated pout with mouth twisted like one. This led my elder brother to remark: why, he looks like Jack Palance! Yes, that Jack Palance, the quintessential villain of Western movies (think Shane) with the battered nose and boxer-like features. Learned that indeed he did some boxing before getting to the movies.

Anyway, bad comment notwithstanding, we were on our way to getting hooked on the Pelvis. We couldn’t help breaking out into song with wild gyrations upon hearing him sing on any phonograph – at home, on a dance, or in one of the local stores selling records. The addiction was catching and would all collectively conflate into a sort of epidemic. We all wanted to sing and move like him, and look like him. The latter being a very unlikely stretch given our Asian features. But we could articulate some imitation with regard to our voice, our hips, and yes, our hair. And those we did. Thus, those who could all cultivated our pompadours, and took great pains to keep them in place. But many of us could not complete the transformation try as hard as we did, not even with just the hair. Many of us could not grow sideburns, so “fake” ones had to do - done by applying heavy pomade on the portion of hair on the temple and combing it downward where sideburns ought to be.

The crazy world of Elvis took hold of our young lives like no one could. We held contests to find out who could sing and move like him. Local filmdom crowned an Elvis Presley of the Philippines. His songs dominated the airwaves and the hot afternoon jam sessions very common in that milieu. So soaked up and engrossed in our adulation and imitation that it was easy to start believing we were Elvis. Thus any social approbation in this regard was not only welcomed but was considered great honor.

To this day, it is not surprising that I can easily recall events related to this need for social acceptance. And I can narrate two that stand out prominently in my memory

The first one involved a friend and classmate named Nazar. After just getting out of a local barbershop and joining friends in the local plaza, without any prodding Nazar immediately noticed the new haircut and coolly remarked that it was good, Elvis-like and he liked it very much. Now coming from Nazar that was truly something for he was noted not only as quite mischievous but quite stingy in giving praise to anybody. So that remark stayed with me to this day, to be reminisced and valued.

And the other one from a most unlikely source. From one so guarded, circumspect in her statements and comments. It was both difficult to elicit any negative remark from her and just as equally difficult to hear her crow about her own children. Hearing me endlessly singing Elvis-like in front of the radio or phonograph, and inside the bathroom, and watching interminably how I had combed my hair and had dressed in whatever way we could like the King, the better judgment of my mother may have been impaired or temporarily blinded. Because I had overhead her remarked to another relative that indeed I looked like Elvis. The remark boggles the mind because I myself would be the first to admit that the resemblance is almost nil. Except maybe we both belonged to the human race? 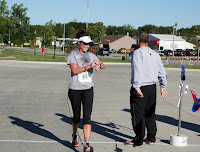 Even then, finishing second place is outstanding.

A preview for what's to come in the GOP presidential primaries?

And this time we won't settle for another second place win! - from one runner to another.