The Evolution Of An Unscripted Search For The Ideal Home


After a long dry spell, I finally found both the time and urge to create a new blog entry, if only to keep alive the memory and animo of a blog that was started several years ago.


What to write about?


Something that has always been in the recesses of my mind, but never expressed nor allowed to ease into the forefront of things.


What many might suggest as the reflexive answer to the oft-repeated question of what their ideal home ought to be.


As kids and wards of our parents, the whole bit about an ideal abode surely did not occupy our consciousness.  We lived with our parents, and lived we did in the house or houses they provided for us.  It was not our anointed lot to be involved in the process of choosing places to stay.  We simply lived – with them.  And liked it or not, that sufficed for our continued existence.


As we grew and acquired our own families, again that question may have been farthest from our minds.  Why, we were too busy trying to eke out a living to worry about ideals.  There were budgets to worry about.  Work opportunities that probably took us to places we detested.  But we went anyway because work was more paramount.  A no-brainer choice compared to unemployment which could bring one’s family closer to starvation or deprivation.


And years may have rolled faster than we could have imagined before the same question may even have crossed our minds, though it obviously will at one time or other since this frenetic world of consumerism and temporal ideals will not leave anybody in peace.  Alluring advertisements in magazines and on audio-visual media, and even like-minded friends and acquaintances will not let us alone.  And there is no escaping that, unless one lived solitarily and in the mountains.


So now leaden and gray, we are left to ponder about the question again.  This time a new alignment is in our stars, giving us time and space, and maybe some extra resources, to seriously explore the question.


What would be an ideal place to live – for you and the rest of your reduced household, as empty-nesters really?  Not when you were young and ambitious.  Not when such an ideal abode could have provided optimal solace and comfort during your difficult years of raising a growing family or dealing with the multitudinous pressures of work.  But at this present time.


Such is the issue at hand.


Chronologically retracing the places where we had resided and spent precious time with family could help develop a keen perspective not immediately fathomed if we resorted to other methods.


The first real place that our fledgling family could call our own home was an old and tiny half of a duplex located in the periphery of Nazareth Subdivision in Cagayan de Oro, the land of my birth.  Rented for the measly sum of 65 pesos a month, it was very decrepit, sewage was leaky and thus made the place looked very filthy and unsanitary, walls were flimsy thus privacy was compromised, and it was hot and humid, dingy and too small for any comfort.  But we survived it, me, my wife, and two kids.  Overall, it was farthest from what could be considered ideal by any measure.


Thrown far into a distant place in pursuit of a better employment future, we rented another apartment.  No better or worse than the first, but maybe a little bigger space-wise.  Made worse by very unreliable electric power, though made more bearable by kindly and very hospitable landlords.  Had recurring bouts of loneliness and strong pining for a more citified environment.  Which promptly disappeared only after that short stint ended.


We were back again to the old hometown.  And the search for an abode close to work ensued.  It was back to the periphery of Nazareth Subdivision, to another duplex which was small, but painted and brand-new.  The small lot on which the building sat was bounded in the back by the city cemetery.  Ugh! Overall, nothing to crow about or a resting place devoid of any redeeming value worth a moment’s remembrance.  Space again was inadequate made worse by the arrival of twins, which doubled the total number of kids.


Finally in desperation, we decided to opt for acquiring our own house.  Not that the family was now oozing with wealth or ease.  But it was the only feasible solution to our multiplying challenges.


It was then that the idea of an ideal house for a growing family became a possibility.


We had purchased on installment two (2) lots totaling over . in a brand-new and ultra-modern subdivision situated in a prime location very close to the poblacion core where I worked.  Wow!  And 2 lots to boot!


But when construction finally started after a whirlwind of preparatory moves, things had changed drastically.


One lot had been assigned to a sister so she could also construct her own house beside ours.  Though the lot where ours would stand was over 300sq. m. it would be a one-storey duplex, one half to be occupied by my dear mother with our youngest and unmarried sister.


We did live in that cramped space of a house with 4 kids and the help for the next 5 years.  Not ideal but bearable, it was after all our own house.  The first house we ever owned.


Then it was family immigration to another country in our continuing search for better opportunities.


We ended going thru the same rigmarole as when we started as a family – first bunking with relatives, then moving to a flat and then to an apartment.


To finally our own house.  Any house that we could afford – without any consideration or thought about what would be ideal for us.  So we ended in an old house with 1200 sq. feet of living space.  Its sidewalls flushed to both neighboring houses, making the entire block looking like a row of fused houses. Individual backyards provided some breathing spaces or elbow room for the occupants.  And for the next 20 years we would call this home.  Not ideal, but safe and secure comfort.


Halfway into our stay there, it was realized that relocation to another place would do the kids still in school better – better environment for both schooling and neighborhood.  Again, a duplex was the choice, though now it was called a patio home.  And it had more space and more rooms.  The development of a few acres had its own main street and open gates.  Still looking like a cookie-cutter community made more so by strict rules on the color of the houses – which was one color.


After retirement, the empty nesters had more depth and breadth to their visions of where the ideal place to live would be.


Away from the frenzied pace of urbanized living, in a newly developed community which used to be a farming town. Finally we were in a detached single-family house with some yards, and lots of elbow room within its over 2500 sq. feet of living space.  Though still part of a cookie-cutter type of development, except a lot larger in acreage.


Then we had to move back to the old homeland, whether permanently or not is still a floating issue, wafting out there in the firmament of uncertainty.  All our kids and their families are still out there.


But could we now pursue and bring fruition to our ideas about what and where the ideal abode ought to be – for us?  Well, maybe somewhat.


We now live in a nice house that we had built for ourselves – with detailed specifications essentially originating from our perceived likes and dislikes.  Though it bore many construction deficiencies, it can pass as livable and comfortable.  The lot on which it stands is smallish, as subdivision lots go.  It is not far from where the first house we ever owned now stands, though the latter had been renovated and made a lot bigger.  But overall, our place could be made better – like maybe in a better location, with better climate, with more natural amenities, etc.


So maybe, this could be the answer. 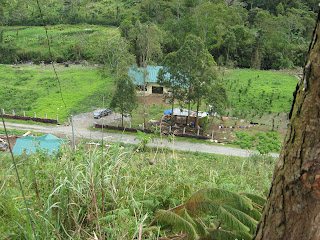 Out there in the mountains with its very cool climate, with a babbling brook in the back and within earshot.  Away from the chaotic hustle and bustle of city life and annoying people.

So who knows what after all this is done and ready for occupancy.  The future holds many answers.


Because as ever, life is a continuing journey.  A work in progress.