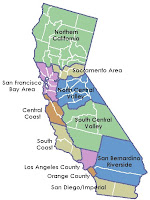 Sorry for the title, just keeping up with the current political jargon. This is one of those WTF moments – for California.

Forbes Magazine has this dreaded annual list entitled the 20 Miserable Cities in the US. And not only does a CA city, Stockton, top the list a second time for the last 3 years, 7 other CA cities are on the list with most of them clustering close to the top.

Forbes takes some pains explaining its methodology in arriving at the “honored” list.

“We looked at the 200 largest metropolitan statistical areas in the U.S. The minimum population to be eligible is 249,000. We ranked each area on 10 factors, including unemployment over three years, tax rates (both sales and income), commute times, violent crime and how its pro sports teams have fared over the past three years. We added two housing metrics this year: the change in median home prices over three years, and foreclosure rates in 2010, as compiled by RealtyTrac. We also considered corruption based on convictions of public officials in each region, as tracked by the Public Integrity Section of the U.S. Department of Justice. Lastly, we factored in an index put together by Portland, Ore., researcher Bert Sperling that rates weather in each metro on factors relating to temperature, precipitation and humidity.”

Not content with the unintended hurt inflicted, Forbes proceeds to detail the whys and wherefores for the individual selections. Here are those for the CA cities:

No. 1 Stockton, Calif.
Unemployment has averaged 14.3% the past three years, which is third worst in the country among the 200 largest metro areas. The housing market collapsed as well, with home prices down 58% over the same time. All the California cities on the list are struggling with the inherent problems the state is facing, including high sales and income taxes and service cuts to help close massive budget shortfalls.

No. 3 Merced, Calif.
The economic downturn and busted housing market hit Merced harder than any other area in the country. Average unemployment of 16.2% since 2008 is the highest in the U.S., as is the city's 64% drop in median home prices.

No. 5 Sacramento, Calif.
No state taxes $50,000 of income like California, with a rate of 9.55% for that middle-class tax bracket. Sacramento is a one-team sports town, and that team has been awful in recent years. The NBA's Kings have won just 26% of their games the past two-plus seasons.

No. 9 Vallejo, Calif.
This one-time Navy town became the largest California city to file for bankruptcy when it entered Chapter 9 protection in 2008. Unemployment is expected to average 12.5% this year, up from 4.9% five years ago.

No. 17 Fresno, Calif.
Despite the ongoing economic recovery, unemployment is forecast to average 16% next year in Fresno, the highest rate among the 75 largest metro areas in the U.S.

No. 18 Salinas, Calif.
Salinas has arguably the best weather in the country, but it can't mask other problems. Home prices have fallen a staggering 61% over the past three years.

No. 20 Bakersfield, Calif.
The residents of Bakersfield are among the most uneducated in the country, with only 15% possessing a college degree and 70% a high school diploma. The U.S. averages are 28% and 85%, respectively

Again, except for one (Vallejo) all the California cities are in the Central Valley, a huge extended valley noted for its abundant agriculture. And infamously as home to many illegal immigrants. California has the distinct privilege of accommodating one half of the total illegal immigrant population in the entire country.

Had wondered where my beloved Tracy would place on this list. Thankfully, it is not included I bet you largely because it has much less than the 249,000 minimum population required to qualify on the list. Tracy only has a population of 80,000, but is very close for comfort to No. 1 Stockton, to No. 4 Modesto, and even to No. 5 Sacramento, which is the state’s capital and less than an hour away from Tracy. The first two honorees are some 20 miles away through the main freeway.

I suppose with regard to the other factors, Tracy would be very much like Stockton, Modesto and Sacramento – namely, in real estate prices, unemployment, crime rates, etc.

Tracy used to be a quiet farming town until many of its farmlands were carved out to accommodate many tract housing developments which were sparking red hot until the housing bubble burst. Today, housing development has eased up considerably but the rest of the town remains preoccupied in its many agricultural pursuits.

To the west of Tracy, beyond the Altamont Pass, lie the extended edges of the Bay Area – the cities of Livermore, Dublin, San Ramon, Castro Valley, etc, all similarly emasculated with depressed real estate prices and high unemployment.

Any hopes for recovery?

Well, for one voters chose more of the same last November , installing essentially the same cadre of politicians and bureaucrats who have been largely responsible for the dire conditions the state finds itself trapped in – budget deficits, looming bankruptcies, high unemployment, problems with illegal immigration, etc. Name the rest, and California suffers from it.

As dazzled residents, we can only exclaim: WTF, California!

Here's an even gloomier picture.

71% of mortgages in Clark Country, NE, where Las Vegas is, are underwater!