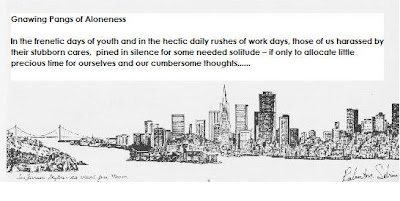 In the frenetic days of youth and in the hectic daily rushes of work days, those of us harassed by their stubborn cares, pined in silence for some needed solitude – if only to allocate little precious time for ourselves and our cumbersome thoughts. And in hindsight, countless precious times spent in aloneness during those trying times were welcomed opportunities, especially because during those times extracting oneself from social contacts and responsibilities was such a daunting task, because for one the strong pressures from societal forces always seemed able to pivot better for ownership of our time and attention. Or work responsibilities could not be easily delegated or ignored all together. Those who could afford or were so inclined, simply dropped everything literally, packed up, and were on their merry ways doing whatever fancied them but all in search for elusive solitude.

I am sure we each have our little treasure caches of stories accumulated while in search for our solace.

But then the other side of this is self-imposed or contracted solitude that we all must bear in the pursuit of goals, or simply as one of the requirements in life when certain things have to be done and cannot be either delegated, postponed, or shunted aside. At times we find ourselves taking solo trips and living by ourselves, even in big empty houses, because we have to. Though not necessarily sought for, solitude had to be trudged through to accomplish goals considered worthy of the sacrifice.

It is in this second light that I now confess that this self-imposed aloneness can be achingly lonesome and produces a sense of emptiness that can tug harshly at feelings and emotions. So that even in the midst of a throbbing city, within reach of the warm presence of other family members, a listless soul can still feel cavernous emptiness likened to the vast expanse of the universe.

An eerie feeling that emptiness is not necessarily of matter or creation, that it worms deeper into such finite realities and transcends beyond what one can touch, feel, or think about. An emptiness that extends beyond but just the same is and can be felt by us while in sojourn here on this earth.

And this we can confirm because when we do get back to familiar territory and warm familial ties it is relieved only for a time, and then in the ripeness of time, it harkens back and ushers in the vacant existence that we thought had been driven to its end.

But no, it stubbornly adheres since like all fleeting emotions which come and go unexpectedly, such emptiness partakes of a similar nature, continually haranguing our listlessness or inconstancy of mind at times least expected.