Electoral Fraud: Around the Globe? 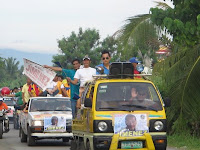 I bet you any serious primer on electoral fraud or voter fraud worth its salt would contain most if not all of the following examples; and this would be relevant to any place in the world where some form of democratic voting is regularly provided for and exercised.

1. Commands to Vote - Where election judges or election officials sign voters in and instruct them on whom to vote.

2. Mass Illegal Assistance – where for example voters are herded into booths by political operators and instructed on how and who to vote.

3. Phony Voters – like when voters are not properly ID’ed.

6. Cash for votes – buying of votes whether inside or around premises of polling places.

7. Loiterers – where regulations on who can enter polling places are disregarded.

9. Poll workers voting for voters – Workers themselves instructing voters not only how to vote but who to vote.

10. Software glitches – Many charges claimed where electronic voting is used.

11. Counting errors – where manual counting is still being done.

12. Politicking inside the room – Political operatives not only loiter but engage in campaigning.

13. Would you like to vote a straight party ticket? – In some places where straight voting is still practiced election officials favor only their party of choice.

And after having gone through with some disgust at the rather long list one is probably thinking this as typical in some obscure developing country where elections usually are messy, chaotic, and maybe violent, or littered with illegal practices. And one could be right to assumed so. I myself had just witnessed my first local election ever after having been gone for over 30 years from the old homeland. And the verdict in media and other sources has been almost unanimous – the election was rigged, or more benignly, tainted because of massive vote-buying which has over time become the common fare in elections hereabouts. And mind you, these were elections for the lowliest political subdivisions in the country – the barangays. Served with some unique side dish called election for Sangguniang Kabataan (SK) (Youth Council) where underage residents also vied for positions and got elected, supposedly to form part of a national youth legislature. Anyway, there were claims that vote-buying permeated through that level, too. What a way to start future voters on the road to civic duty!

A local Jesuit priest had thrown in some nuggets of wisdom on the just-ended elections which prompted my quick personal response that somehow got stuck in inertia and never got out. So here it is:

From all appearances electoral fraud epitomized by vote-buying and cheating has become the handmaiden of Philippine elections. Thus for “good” candidates to stay above it is hard and difficult. The “daang matuwid” people speak about is narrow and precipitous and thus daunting to travel.

The dilemma is that if “good” candidates find it near to impossible in getting elected, governance is then littered with people infected with their own nefarious agenda. And I would be bold to say that that is precisely our situation, if not nationally then for sure, locally. Elected “public servants” gunning for their own self-interests.

The solution then is as much a function of “good” candidates as the very people who have been empowered to choose. The electorate deserves the governance it voted for.

Given the realities, there is the huge task of re-educating and re-calibrating the minds of an electorate long poisoned by the tempting allures of petty cash and sappy promises. And in tandem, of stirring the long-lost virtue of eternal vigilance in the segments of the electorate that continues to care about honest elections and dedicated public servants.

Going back to the original topic, allow me to disabuse any knee-jerk judgment that those examples of voter fraud listed above must of consequence come from third-world countries. Because in this one particular case, this list came from this source in the US of A and is a cautionary tale for the coming mid-term elections scheduled on the 2nd of November. All those examples listed have precedents in the US setting and for some examples, already in the running in the context of the forthcoming elections where early voting is allowed. So this shining example of the grand experiment on democratic principles and representative democracy is currently toiling and groaning under electoral vicissitudes most common and vile in developing countries.

From the start these bitterly-contested elections exploded in ways one would find atypical and not likely in a more stable and experienced state like the US. But they did.

And this commenced some 2 years ago when this current president was historically and surprisingly elected. The interim period has been wracked with ugly political fights and wide dissensions that have cut across the country and divided it into clear and marked battle lines. And now even illegal aliens have thrown their weight into the fray. Cautions in ethics, civility, propriety, you name it, and yes, even law have been thrown to the winds, producing a dirty, savage, and brutal free-for-all not seen during my entire stay there.