Canned Sardines In A Tight Fix 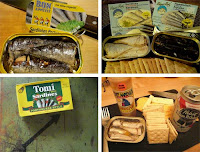 Packed like sardines! Sardines are for the poor! Tiny as sardines! All idioms that have leaked into our local jargon, all referring to the much-derided (because of its smell) but nutritious canned sardines that were quite a common fare during my youth. A youth spent in a developing archipelagic country where fish was a default part of diet. But now here in the US a canned food item typically relegated to share shelf space with other unpopular menu items in discount and warehouse stores. Or in some rarely visited sections of the many upscale urban grocery chains.

This little bit of news the other day continues to signal the continual decline of the canned sardines:

Production at Maine canneries has been sliding since peaking at 384 million cans in 1950. Faced with declining demand and a changing business climate, the plants went by the wayside one by one until, five years ago, the Stinson plant was the last one standing. Last year it produced 30 million cans.

Blame it on the changing palates of consumers bringing about declining demands for production. And in a significant way, blame it on the new kid on the block, the tuna, which has gained acceptance for most people of all economic status, shabbily pushing aside the rather very fishy smell of sardines.

A product which was so commonly part of our diet is slowly dropping by the wayside, and yet we know so little about it – like what kind of fish is typically used. Most would know that the typical fish variety used is related to the herring, but less would know that there are many species, about 21, that could be referred to as sardines. Or that among the knowledgeable sardines are called pilchards. Or that the name sardines was given because many of them could be found around the island of Sardinia. Here, learn more.

Regardless, canned sardines had and will continue to have a well-deserved place in this writer’s frugal diet. Opening our cupboards would reveal several flat tincans of different brands, all claiming to be sardines or wannabe sardines. Why just yesterday, I pulled and rolled one can, emptied all the contents to a deep saucer and added butter/margarine. Crushed and mixed all of it thoroughly and made it the filling of a sandwich in a bun. Yummy!

If so inclined, here’s a link that will provide one with ideas on what to add to the drab or unglamourous contents of your can of sardines.

Enjoy a very cheap (usually way under a dollar per 4oz can ) snack or meal that should give one some points toward a more healthful and satisfying diet.
Posted by Amadeo at 4/16/2010 11:46:00 AM 2 comments: