Body Language In The Electronic Media 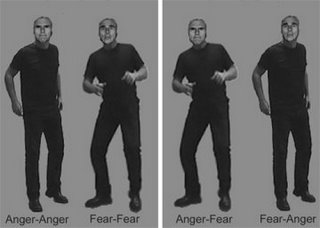 Paralanguage, including body language, has been extensively studied in social psychology. In everyday speech and popular psychology, the term is most often applied to body language that is considered involuntary, even though the distinction between voluntary and involuntary body language is often controversial. For example, a smile may be produced either consciously or unconsciously. (From Wikipedia)

The other night, Bill O’Reilly had an interesting segment in his hour-long program, O’Reilly Factor, about body language. He had a resource expert, a young personable lady, interpret the body language exhibited by four very public personalities who figured separately in TV appearances with the unabashedly self-confident O’Reilly. These were President Bush, Sen. John Kerry, Oprah, and David Letterman. Oprah and Letterman had the tables turned, they were interviewing O’Reilly, if such is possible given the latter’s very assertive manner in those one-on-ones.

Personally, I snickered a bit during the lady’s serious presentation, not because I had doubts that body language can be discerned and interpreted beyond the measured words that the speakers were expressing during their TV appearances. It just feels too uncomfortable listening to a rather young woman, with college just a few years behind her, passing critical judgments on the physical mannerisms of these experienced and public-scrutiny-hardened older personalities.

Per Wikipedia definition above, arguably body language does reveal a lot about the speakers beyond what they have planned or rehearsed to express publicly. And I am surmising that the art of studying body language draws pretty much from the same justifications that a lie detector test banks its findings on. A peep into the unconscious and unrehearsed mannerisms a speaker may uncontrollingly exhibit, both outwardly and inside their bodies.

And by and large, I am sure we can agree that we do typically factor in body language in making overall judgments about statements of speakers. And at times, how we interpret statements may be guided more by body language than the words actually expressed

It has been brought out by some blogs that with regard to the now infamous statement of Sen. John F. Kerry, the not too subtle trace of a smirk after the sentence may have exacerbated rather than mitigated the claimed “botched” joke.

It may also be worthwhile to note that prior to oral speech, many scientists agree that man first communicated with body movements and gestures. Thus, the now universally accepted wave of the right hand to acknowledge people was not always so. It is claimed that when early man chanced upon another man on any path, the raising of an empty right hand was a generally accepted warning to the other that one is unarmed and does not have any hostile intention toward the other, rather than as a friendly wave of Hi or How Are You.

In fine then, going hand in hand with man’s personal and face-to-face interaction with his fellowman, body language has been a quite reliable tool to impart the speaker’s inner motives and attitudes beyond the words that he articulates to impart his message. And as a species, we are the better for this. No doubt, many a violent confrontation or serious misunderstanding may have been averted because of this effective communication combination. Body language, which reveals more of the speaker’s true state of mind and intentions may have at countless times emerged to the rescue to save the day.

But we have now entered into another medium of communications, where body language may not be able to come into play. Electronic communications do not now allow face-to-face confrontation in our many everyday interaction. It may even be worse than the use of the telephone where at least the tone of voice is decidedly part of body language, too.

But it appears that the only body language available under our new context is the body of the messages we are sending out, be they emails, blog posts, online chats, and commentaries.

So what are the evidently patent ramifications?

Absent traceable and detectable body language, how do we fare in our current interactions with others in the new medium?

As always technology has tried and continues try to help us keep pace. Thus, for one, we have those little tiny icons called Emoticons that can be liberally used and spread to decorate and enliven our text messages and express somewhat a snippet of the mood of the sender. But usage is still very limited and serious electronic communicators may not be too inclined toward something still considered quite fluffy, or flippant.

And the common text additives, like HaHaHa, or HeHeHe, , or even HEH may have countless times served to diffuse what could otherwise turn into an unfriendly situation.

The obvious area of concern is how our messages are coming across, influenced as they are by the writer’s style of writing, his facile command of grammar or its absence, and of course, his mood at the time of writing; and greatly influenced also by innate reservations, inhibitions, and even fears one may have toward his intended reader or readers.

But what may be undeniable is that communicators in this electronic medium will now have to exercise greater diligence and circumspection in delivering their messages. And as we are often times cautioned, let us not be too quick to hit that send button. Type, edit and reread, and think twice before sending. Or maybe even have another if one is around proofread the message to be sent. Remember this time body language may not be around to save the day for us. Once sent, it cannot be retrieved or undone.

I learned from personal experience about this too sadly, in spite of due diligence and extra caution. We cannot be always a 100 percent sure or right. At times our physical condition or moods at the time of writing may make slip-ups easier to make and harder to detect.

Thus it might also be a greater part of discretion, to be prepared and expectant of the need to offer well-rehearsed and well-intentioned apologies should we later on discover or be brought to our attention that we have crossed the bounds of propriety, or decency, or simply, good discretion.

After all, to err is still human.