John F. Kerry In The News

While it is still red-hot, allow me this rare opportunity at political punditry as the US mid-term election ushers its last 7 suspenseful days.

"You know, education, if you make the most of it, if you study hard and you do your homework, and you make an effort to be smart, uh, you, you can do well. If you don't, you get stuck in Iraq."

In a nano-second, the whole world of media and blogosphere exploded like an unexpected IED.

The debris has not settled and cleared yet, since the ensuing crossfires from all sides continue to be exchanged. Sharp explosive retorts delivered in assumed righteous indignation and equally assumed justified anger fill the air.

So, let’s all move way from the scene of carnage and take a long and detached view.

Even if we assume that John Kerry hates or despises the military to the core of his soul, he is not going to articulate that publicly whether with subtle or not so subtle intent, or even comic inference. That would be as close to a political hara-kiri as one can get especially in these waning days of the frenetic campaigns. He is not the polished politician that everybody labels him to be if he does not know this.

So, let us take it for what it obviously is. He simply misspoke, using a badly constructed and limply delivered sentence. And culling from his subsequent pronouncements, an equally bad analogy of comparing not studying hard to the situation of a president who is waging a failed and protracted war in Iraq.

So, why is this happening to him?

He is supposed to be the clever and polished debater/speaker as proclaimed and shown during his last run for presidency.

Maybe, he was just plain tired and not thinking too sharply?

We, I’m sure, would have expected that kind of extemporaneous speech gaffe to come from a less gifted politician. Like a George W. Bush? Who, by the way, in his response, referred to the troops as “plenty smart”.

Since many of the people who read and analyzed the above Kerry statement believe that he was referring to the military as “stuck in Iraq”, including parents of soldiers, veterans, and many of their neighbors, he should just apologize to those inadvertently slighted. And get this entire thing behind and move on.

That shouldn’t be hard to do, even for a highly educated, intelligent, and experienced senator. Unless, there really is something more that Kerry is not publicly stating.
Posted by Amadeo at 10/31/2006 06:27:00 PM 3 comments: 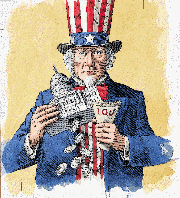 If the United States government conducts business as usual over the next few decades, a national debt that is already $8.5 trillion could reach $46 trillion or more, adjusted for inflation. That's almost as much as the total net worth of every person in America - Bill Gates, Warren Buffett and those Google guys included.

This dire prediction comes from the GAO chief himself, the top government accountant.

Need perspective? Start tallying: all the houses owned by every American in every town and city, all the balances in deposit accounts, all the private vehicles, all personal valuables, etc., minus whatever every individual owes a third party - his bank, his neighbor, the garbage company, etc. I’m not sure if we should also include government assets like public buildings, freeway systems, parks, monuments, etc. But the current national debt of 8.5 trillion is dizzying enough to try to figure and comprehend.

BTW, there is an on-line US national debt clock that keeps track of this. If you are one who finds value watching grass grows, this one is a little better it grows faster and quicker.

Scary? Let’s add more scare factors, all originating from the same source, the GAO chief, Mr. David M. Walker, who is on a stumping tour till 2008 barking his message to any “boring” American audience willing to hear.

. . .just the interest payments on a debt that big would be as much as all the taxes the government collects today.

And every year that nothing is done about it, Walker says, the problem grows by $2 trillion to $3 trillion.

Medicaid and Medicare have grown progressively more expensive as the cost of health care has dramatically outpaced inflation over the past 30 years.

. . .a bigger deficit means a greater portion of each tax dollar goes to interest payments rather than useful programs.

Social Security will begin to run deficits during the next century, and ultimately would need an infusion of $8 trillion if the government planned to keep its promises to every beneficiary.

Unfortunately, the apocalyptic messages are hard to refute negatively.

So is the sky falling?

First, let us see. Social Security, Medicare and Medicaid translate loosely to government-subsidized social safety nets and government-provided health care. Aren’t these shades of the hallmarks of many European economies many progressives are prone to extol and desire?

Okay, so it is reported to us that Italy is on the brink of economic gridlock and the nascent Central European economies are reeling from heavy impositions coming from the EU parliament. And many EU economies suffer from anemic growth rates. But still, the world continues to spin and European countries continue to magnetize hundreds of millions of the world’s tourists to their shores.

But what can be done United States-side?

GAO chief has short prescriptions for the looming fiscal crisis: Some combination of tax increases and benefit cuts. 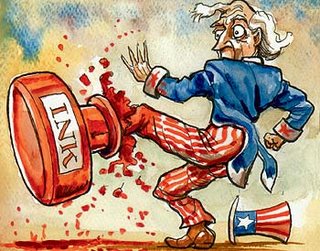 Did he forget: bitter medicine for curbing runaway government spending to tame the Federal budget deficit?

What can he prescribe for the other twin, our trade or current account deficit?

There appears no easy and short answers and solutions on the event horizon.

Let’s pray Mr. Walker’s life span approximates that of the biblical Methuselah giving him ample time to extricate us from all these woes.

To his eternal credit, Mr. Walker refuses to lay total blame on any one administration, including the current one, but warns that if nothing is done expeditiously any claim by the current president to any legacy will be tainted by his inaction.