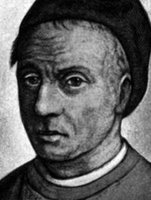 “The reason why we are so willing to talk (or write) is, because by discoursing together we seek comfort from one another . . .
Avoiding superfluity of words, Thomas a’ Kempis.”

No doubt, talking, communicating, discoursing with each other is one predisposition quite difficult to curb or supplant. We long for company. We are by nature social beings. We are not complete unless and until we become part of the social structures around us, be they family, clubs, friends, gangs, office mates, and yes, even fellow bloggers.

This new medium of blogging allows us to pursue this yearning in a much more efficient and universal way, traversing beyond geographical frontiers and great distances.

And now also beyond just keeping touch with our little worlds, this new medium takes on a myriad of functions, not only in our social milieus, but also in such other narrower or more specialized areas as politics and business. This medium now transcends all aspects of human living. In all aspects imaginable. Namely, in education, news gathering and broadcasting, and still more countless others.

So pervasive as to be confusing and overwhelming.

And thus, aside from information overload, the more critical issue of where the truth lies in this swirling universe of data, opinions, news, images, etc. becomes truly a critical concern.

While in the pre-electronic stages, man could search through fewer sources, “bibles” that could be regarded as universally reliable in discovering and discerning known truths, such as why not, holy books and works of great men, in this now indefinable universe, where any eager beaver with typing skills and Internet access can add to the exponentially expanding chest of electronic knowledge base, learning the truth can truly be a very daunting task.

Take a cursory test, and browse through, for example, sites that do round-ups whether of political news/developments, or fitness programs, or sports, or science news, or even with uncontroversial subjects such as, say fishing. Or results of war?

One can readily get the impression that the world of knowledge and information has become one big “he said, he says” game. The head or tail odds game of learning where the truth lies. 50-50 chance of being right or wrong. (Though many would opine that truth usually hides somewhere in between two very opposing views.)

Regardless, the advent of electronic media has as a largely unintended consequence made arriving at the truth a more difficult task.

But let us not be disheartened, the maid of truth is not done yet. She continues to find ways to elevate her ways to man’s consciousness. With able assistance of the same tools that allow for the quick dispersal and access of available knowledge, we might be in the threshold of yet another milestone in the continuing flux that electronic technologies are bringing us.

Google predicts that in the very near future, we may be developing what it calls “truth predicator” software. While this eventual reality is not expected to unquestionably mark out truth in every and all statements made publicly available, we should be able remarkably increase the probability that readers/hearers can arrive at the truth.