“GOSPEL OF JUDAS”: A Personal Look 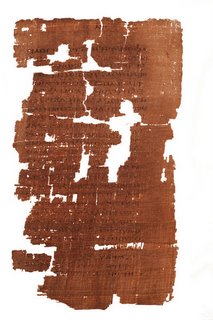 One can always count on media to do things with a flourish, both dramatic and poetic. Thus in the midst of Christendom’s holiest of holy week, media found exactly the right spark to ignite some passionate discourses and some raised eyebrows. And lest we forget, some considerable bumps in their viewership and readership worldwide.

Last week, right about Easter, media particularly National Geographic TV, rent the somber mode of Lent, with their publication of the translation of the long-anticipated Coptic text heralded as the newest gospel, “The Gospel of Judas”. And thus in their eyes and in the eyes of the countless Christians and Christianity observers around the globe, a revelation that surely will usher in fresh challenges to the largely unopposed canonical Gospels of the four evangelists, John, Mark, Matthew, and Luke. Understandably, reaction was mixed, strongly both for and against.

Though I could have been counted among the more subdued and conciliatory third front minority, who whispered in hushed tone that maybe, it is about time reviled Judas Iscariot be given some slack and be allowed to redeem himself, using a disembodied voice extracted from old papyrus accidentally excavated out of the burning sands of the Egyptian desert. This original codex allegedly was found sometime around the 1950s and 1960s.

Many, especially those who were probably secretly gladdened to see new text evidence to challenge the heavy dominance of the existing Gospels over the centuries, were only too quick to lend credence and authority to the translated text. Though one wonders if many have seen and read the text in question.

I was one of those who had not seen nor read the newly touted gospel, thus accounting maybe for my kinder condescension on the claimed findings. If it is a gospel of Judas, maybe it has some validity and not as bad as some older apocryphal gospels that were thrown out many centuries ago, because many of them could not establish any historical context.

Thus, I began my little journey, trying to find out more about this newest “gospel” that has stirred so much emotion and discussion among the pundits and elites of society and religion.

It was not difficult to find sufficient material to enable one to discern and make some preliminary judgment about this new finding. The web is full of it.

There are .pdf files for both the translated (English, of course) and the Coptic text. The first for 7 pages and the other for 27 pages, though some sources put them at 24 pages. And as expected, the Web is littered with articles, essays, opinions, news items, etc. all about this.

Before proceeding, it might help to understand a few things first.
The original papyrus is in Coptic text, which by definition is the liturgical language of the Coptic Church used in Egypt and Ethiopia, and written in the Greek alphabet.

It is called a codex, because the manuscript is bound together into a book form.

The new “gospel” is a Gnostic one, which is therefore read and accepted by the Gnostics. The word comes from the Greek term, gnosis, meaning knowledge.

Gnosticism is one sect of Christianity which dates back to the very early centuries, a belief that holds that salvation could be obtained only through the “knowledge” and acceptance of certain divinely revealed mysteries. And the caveat is that only Gnostics have possession of these divine revelations. They were considered heretics by orthodox Christianity.

What can we, laypersons, discern and deduce from a reading of this gospel?

First, one notices that though this is supposed to be a codex, thus a book, it is really quite short and one familiar with the four Gospels can easily compare and see that the latter are much more voluminous and chockfull of historical details. The Judas gospel offers very scant historical details and settings to lend itself open for easier research and verification. Very much unlike the canonical Gospels. And overall, personalities mentioned in Gnostic gospels such as Jesus, Judas, Peter, and even Mary Magdalene are not fleshed out for any understanding about them, other than as sources for certain spiritual truths claimed. And historical credibility has been the main criterion that distinguishes the canonical Gospels with those judged as apocryphal, because they provide a clear and accurate, and almost contemporary, historical picture of Christ and his times.

Second, this new gospel reads like a rather extended private conversation between Jesus and Judas. Thus, immediately the question why just him and not the rest of the followers? There were at least 12 Apostles and countless disciples.

Third, the new revelations are quite in conflict with some core doctrines in the canonical Gospels. Christ talks to Judas about other deities and angels and thus debunking the doctrine of a monotheistic Deity. And the bombshell is of course the clandestine strategy of Christ as revealed to Judas: that He has to be betrayed so that he can be killed and thus can rejoin the spiritual world. And Judas has been tasked to do this and for which he agrees.

Fourth, the canonical gospels were pretty much set and written by the first century, 100 C.E. and the Gnostic gospels, including this one, were written on the second century, and some further beyond. Common threads in doctrines and beliefs in the Gnostic gospels can be found, and this one is no exception, including one purportedly attributed to the Apostle Thomas. Thus, clearly this new gospel fits into the core beliefs of the Gnostics, and does not even add anything new that was not already known about Gnosticism and the early Christians who practiced their beliefs.

But then again, many of us Christians will continue to hold on to beliefs and opinions that we already treasure and cherish, all this notwithstanding.
Posted by Amadeo at 4/24/2006 09:33:00 AM 4 comments: