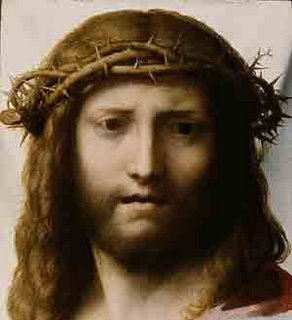 The name of Jesus Christ has once again invaded and pervaded in the world of US politics and media. Not because this week commemorates his Agony and Death on the Cross, but more like a little ball in any sport, being tossed to and fro in the frenzied attempt to score points. And in this regard some secularists are only too glad to oblige and kibitz from the sidelines. Paradoxically and uncharacteristically, not to cheer on but to lambaste and castigate all political sides for taking and hiding under the emblem of Christ.

The recalcitrant issue that has brought the name of Christ into the fray has been the illegal immigration problem besetting the US and which is now in the midst of very heated discussions and raucous protest demonstrations nationwide.

One can believe that the revered name of Christ has once again hogged the limelight because from the start, the still influential Catholic Church has unequivocally taken a strong stance in favor of the illegals and against what the government has been able to muster so far as possible equitable and humane solutions.

The politicians of all persuasion are simply making hay, riding on the ripples and waves stirred by powerful groups who have taken the cudgels for the “hapless” illegal aliens.

One particular piece, titled Christ Among The Partisans was written by Mr. Garry Wills who is professor emeritus of history at Northwestern University and the author of the book, most recently, of “What Jesus Meant.”

Never mind his very strident position enunciated on surgically separating Christ and all he represents as revealed in the Gospels from government and the political sphere because the association of the two is utterly incongruent. Instead his analogy of Christ with Socrates and Nietzsche was one I found most interesting.

The Jesus of the Gospels is not a great ethical teacher like Socrates, our leading humanitarian. He is an apocalyptic figure who steps outside the boundaries of normal morality to signal that the Father’s judgment is breaking into history. His miracles were not acts of charity but eschatological signs accepting the unclean, promising heavenly rewards, making last things first.

He is more a higher Nietzsche, beyond good and evil, than a higher Socrates. No politician is going to tell the lustful that they must pluck out their right eye. We cannot do what Jesus would do because we are not divine.

According to Mr. Wills, Christ is not a great ethical teacher and Socrates is a humanitarian, a leading one. And Christ can be likened to a higher Nietzsche, though he does not proceed to tell us why. Which would have been enlightening, especially for the uninitiated and inadequately schooled like me.

But going back to the comparison of Jesus with Socrates, here is what a Jesuit theologian, Fr. Michael Buckley, writes about in his study of the two:

There is a classic comparison running through contemporary philosophy between Socrates and Jesus, a judgment between them in human excellence. Socrates went to his death with calmness and poise. He accepted the judgment of the court, discoursed on the alternatives suggested by death and the dialectical indications of immortality, found no cause for fear, drank the poison and died.

Jesus - how much to the contrary. Jesus was almost hysterical with terror and fear, “with loud cries and tears to him who was able to save him from death.” He looked repeatedly to his friends for comfort and prayed for an escape from death, and he found neither.

Finally he established control over himself and moved into his death in silence and lonely isolation, even into the terrible interior suffering of the hidden divinity, the absence of God.

From the above, one is led to the conclusion that measured in human excellence, as perceived by us humans, “cool” Socrates has the edge over almost hysterical Jesus.

But the differences in their deaths may account for the flagrant signs of weakness, at least physical and not necessarily moral. The death sentence of Socrates was for him to drink the hemlock and lie down to die. And this he did with nary a whimper, but with stately calm and ease.

However, the death sentence of Christ was quite different. He had to undergo all that agony and suffering, both physical and mental, before actually dying. Even actual death took a while after the crucifixion. And even as pure man, he must have had forethought and foreshadowing of all this. This was a process not unique to his case, but common for all criminals sentenced to die.

This may account for the physical weaknesses exhibited by Christ as contrasted with the obvious strength shown by Socrates.

But another theologian, Fr. Ron Rolheiser, goes further to declare that Christ indeed was more profoundly weak than Socrates. And his beautiful prose clearly lays out a very strong case of a most human Christ, foibles and all:


Now I believe that Jesus was a more profoundly weak man than Socrates, more liable to physical pain and weariness, more sensitive to human rejection and contempt, more affected by love and hate. Socrates never wept over Athens. Socrates never expressed sorrow and pain over the betrayal of friends. He was possessed and integral, never overextended, convinced that the just person could never suffer genuine hurt. And for this reason, Socrates - one of the greatest and most heroic people who have ever existed, a paradigm of what humanity can achieve within the individual - was a philosopher. And for the same reason, Jesus of Nazareth was a priest - ambiguous, suffering, mysterious, and salvific.

In what way precisely was Jesus a weaker man than Socrates?

In his incapacity to protect himself against pain, in his vulnerability, and in the interior anguish and exterior humiliation that this congenital, moral trait inevitably produces. In contemporary language, Socrates was simply set together better as a human being than Jesus was, at least in terms of how we normally judge this.

In Socrates there was, certainly in the face of opposition and death, a poise, an ease, an interior peace, and an attractive calm that was absent in Jesus. Socrates was “cool” in a way that Jesus wasn’t. Socrates always looked attractive. Jesus didn’t. Jesus sweated blood (no glamour there), shed tears that he was unable to hide, and was stripped naked and humiliated in front of his loved ones. You don’t look attractive when that happens and you can’t hide the pain of that from others.

And yet, that’s exactly what we most want to do. In our world there’s a powerful, omnipresent pressure (put forth even in the name of religion, humanity, and maturity) to protect ourselves against pain and humiliation, to never, never be vulnerable enough so as to risk falling flat on our faces. At all cost, no matter what other kinds of pain we must endure, we don’t want to be caught needy, being the one who has to ask, the one who has to beg, the one who’s embarrassed, the one who doesn’t look good.

And so we try to arrange ourselves, our lives, and our relationships in such a way so as not to be too affected by things, so as to avoid the tension of interior anguish, and so as to never risk not looking good. The attractive persona (“cool”) of Socrates more than the humble, all-too human, tears of Jesus is our ideal.

But, and this is the point, by protecting ourselves in this way we don’t ever become vulnerable enough to enter into an intimacy with others and the world that is salvific and priestly. We never save anyone, even though we look good. What’s meant by that?

To love is to care. But as soon as we begin to do that, we open ourselves to weakness, sensitivity, and humiliation. Why?

Because to be sensitive is to know that it’s better to be sad than bitter, better to be hurting than hard, better to shed tears than be indifferent, better to taste death than never risk living, better to feel rejection than never to have loved, better to groan in interior anguish than to prematurely resolve tension, and better, for the sake of love, family, faith, and commitment, to sometimes look the fool, the needy one, the simpleton, than to always successfully hide what’s most true inside us so as to be the one who never has a hair, a feeling, or an opinion that’s out of place.


A poignant picture of a Christ who is magnificent in his humanity. A most perfect model for man, who himself is heir to a flawed nature and consigned to a life of countless trials and defeats.

God gave us a son incarnate, purposely and assiduously mirrored to the image of fallen man. But yet, man who has been given a reprieve and enjoined to follow in the footsteps of the GodMan on the path to his own redemption.
Posted by Amadeo at 4/14/2006 06:06:00 PM 6 comments: