Is The Name DARPA familiar?

Well, it is only the precursor of the present-day Internet. Before the blogosphere, and all the other spheres in the cyber-firmament, even before WWW, there was Arpanet of DARPA.

It is the acronym for The Defense Advanced Research Projects Agency and is the central research and development organization of the US Department of Defense (DoD).

.. to manage and direct selected basic and applied research and development projects for DoD, and to pursue research and technology where risk and payoff are both very high and where success may provide dramatic advances for traditional military roles and missions.

In the current Iraqi War, the most pernicious and deadly problem encountered by the Coalition forces, and including the Iraqi civilians, has been the almost unstoppable effectiveness of the IEDs, or the improvised explosives devices. Or simply your home-made roadside bombs.

Iraq is one of the most heavily mined nations in the world. As of early 2003, it was estimated that there were over 10 million mines already in the ground—8 million antipersonnel (AP) and 2 million antitank (AT), with Iraq both a producer and exporter of AP mines.

DARPA is in the middle of all this planning and research to try to neutralize the effectiveness of IEDs.

The latest experiment of scientists has been to try and create an army of cyber-insects that can be remotely controlled, like many roadside bombs are, to check out explosives and send transmission.

Here’s the rest of the report from the BBC:

The idea is to insert micro-systems at the pupa stage, when the insects can integrate them into their body, so they can be remotely controlled later.

Experts told the BBC some ideas were feasible but others seemed "ludicrous".

A similar scheme aimed at manipulating wasps failed when they flew off to feed and mate.

The new scheme is a brainwave of the Defence Advanced Research Projects Agency (Darpa), which is tasked with maintaining the technological superiority of the US military.

It has asked for "innovative" bids on the insect project from interested parties.

Darpa believes scientists can take advantage of the evolution of insects, such as dragonflies and moths, in the pupa stage.

"Through each metamorphic stage, the insect body goes through a renewal process that can heal wounds and reposition internal organs around foreign objects," its proposal document reads.

The foreign objects it suggests to be implanted are specific micro-systems - Mems - which, when the insect is fully developed, could allow it to be remotely controlled or sense certain chemicals, including those in explosives.

A winning bidder would have to deliver "an insect within five metres of a specific target located 100 metres away".

The "insect-cyborg" must also "be able to transmit data from relevant sensors, yielding information about the local environment. These sensors can include gas sensors, microphones, video, etc."

Scientists who spoke to the BBC news website were unconvinced.

"What adult insects want to do is basically reproduce and lay eggs. You would have to rewire the entire brain patterns."

Dr McGavin said it appeared impossible to connect the technology to the right places during the metamorphic phase, particularly with regard to flight.

Prof Andrew Parker, research leader at the Natural History Museum's zoology department and a specialist in bio-mimetics, said the concept was not too far fetched but had its limits.

Technology could help direct an insect to chemicals such as in roadside bombs, he said, but controlling full flight was "a long way off".

Entomology expert at the museum, Stuart Hine, agreed it was plausible to use insects to detect explosives.

But he added: "I feel that the reality of such cyborg fusion between insect and machine lies squarely in the realms of fiction."

To receive micro-signals from the insects would require a dish "quite close and several feet in diameter, rendering it a less than covert operation".

Darpa's previous experiments to get bees and wasps to detect the smell of explosives foundered when their "instinctive behaviours for feeding and mating... prevented them from performing reliably", it said.

Darpa was founded in 1958 to keep US military technology ahead of Cold War rivals.

Its website says it has around 240 personnel and a $2bn (£1.1bn) budget. Supporters say much of its work has been successful, but it has also drawn criticism for unusable "blue-sky" projects.

In The Philippines: Of Cacao trees, Chocolate, and Tablea 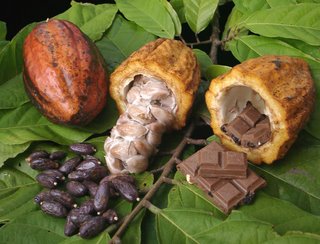 I'm sure many of us have often wondered how the cacao trees started to grow in the old homeland. We have somehow assumed that it is native to our place, because it is a tropical tree.

But searches about its origins do not point to any Far East connections. Usual reports point to Latin American roots, specifically Aztec ones.

So, if not native to us, how did it get to the Philippines?

One possible explanation is contained in this little chronology:

* Chocolate was first noted in 1519 when Spanish explorer Hernando Cortez visited the court of Emperor Montezuma of Mexico. American historian William Hickling's History of the Conquest of Mexico (1838)reports that Montezuma "took no other beverage than the chocolatl, a potation of chocolate, flavored with vanilla and spices, and so prepared as to be reduced to a froth of the consistency of honey, which gradually dissolved in the mouth and was taken cold." The fact that Montezuma consumed his "chocolatl" in goblets before entering his harem led to the belief that it was an aphrodisiac.

* In 1528 Cortez brought chocolate back from Mexico to the royal court of King Charles V. Monks, hidden away in Spanish monasteries, processed the cocoa beans and kept chocolate a secret for nearly a century. It made a profitable industry for Spain, which planted cocoa trees in its overseas colonies.

If this is true, I suppose we have to give credit to Mother Spain for bringing it to our shores.

At present, cacao beans are almost as commonplace as coffee beans. And the cacao trees now form part as an important component in the intercropping farming methods used in many areas where coconut trees are also abundant. Many will find these cacao trees growing underneath rows of the taller coconut trees. And like coconut trees that can grow as high as 3000 feet, cacao trees adapt also to higher altitude.

Chocolate and cocoa drinks are now daily staple or food items for most countries in the world.