A Little Bit Of Back To The Past

If one rummages through one's spent youth, what would one find in the attic or closet?

Invariably, one could find a typical assortment of discarded trinkets, old-yellowed scrapbooks and yearbooks, maybe some once-invaluable toys. Some science projects that got honorably mentioned maybe? Or little art objects created and molded by one's little clumsy hands? Maybe some remnants of a philately or a numismatist collection rendered inactive many years ago?

Well, maybe all that and more.

But would one typically find objects that required endless hours to create and prided then as great beauties deserving of some enviable place in one's little room and eventually in the cavernous hallowed halls of one's memory?

Maybe little inconsequential objects that could be likened to currency or legal tender, or even antiques, because they now possess intrinsic values frozen in time and residing in them?

And for me personally more than just invaluable memory stored in them, the strictly financial aspect of countless time invested in them, debited and withdrawn from the finite number of hours in one of life's crucial phases which we call youth.

And this is exactly what I felt during one of my trips back to the old homeland and discovering in some obscure corner of the old house that I used to call home, some of these objects that used to occupy and consume my youthful idle time with such serious vigor and passion that at times made me oblivious to time and its many youthful allures

I well remember that armed only with a several lead pencils (they were actually made from graphite) and ordinary manila folders or any blank pad available, I would sequester myself in some quiet and secluded nook, and with nose to the grind, be completely lost in the creation of those objects.

Now I wonder if I had wantonly misspent so much of my youth on such petty pursuits. And worse, because a good many of these objects have become hapless victims of time and humidity. The little unseen things spawned by the blistering humidity of a tropical place have ravaged many. Realized too late that those little insects (?) could make happy meals out of shades and lines created by lead pencils, leaving only as left-overs the paper they were etched into.

Anyway, discover them I did. And floods of memories immediately rushed out like careening waters from a broken dam. And before assigning them back to oblivion, I now commit pen and space to reliving those then priceless memories

Oh, by the way, these objects are drawings or sketches, strictly of people's faces, heads only.

My favorite subject was the Greek god-like features of Elvis Presley, who was likened to old filmdom's great profile, John D. Barrymore. It was such an easy pleasure etching on paper the prominently chiseled features of the late great rock and roll singer, with his deep-set eyes, full-blown pouty lips, great pompadour, etc.

Several of my drawings of him were saved from completely being lost. Here are those that were spared: 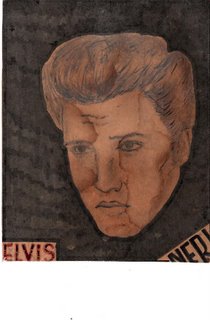 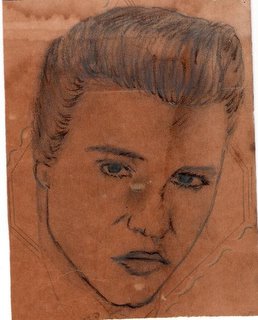 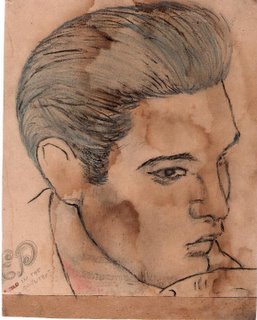 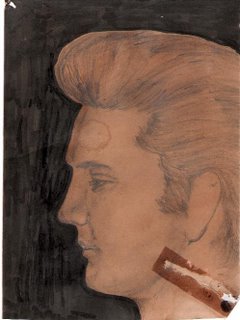 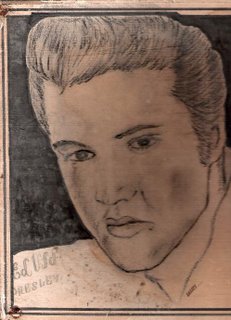 On the distaff side, now old and craggy Liz Taylor was the darling, not only with the puzzling eyes that change colors, but again with the perfectly chiseled features earning for her the title as the most beautiful woman of Hollywood and beyond. Here's a couple: 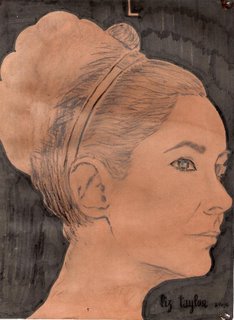 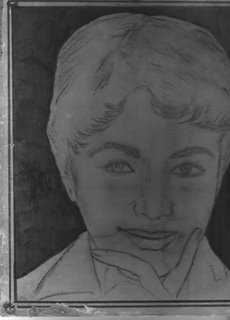 A little bit of ego played in it too, so here's a self-portrait: 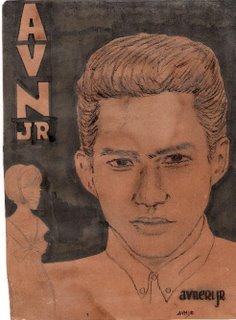 The wife figured in it, too, feeling quite compelled to include her in the odd collection though at a much much later period:

Now, I recall several sketches of pretty local girls were gifted to their admired subjects. 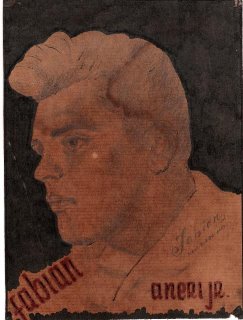 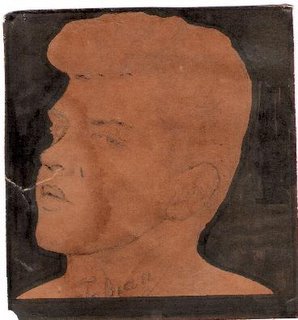 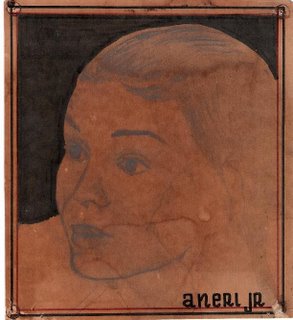 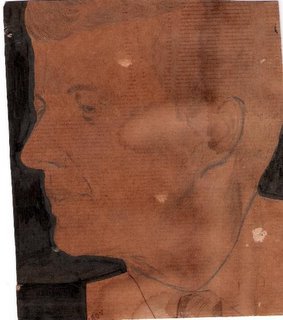 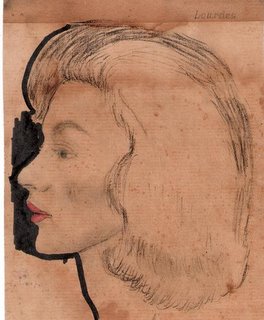 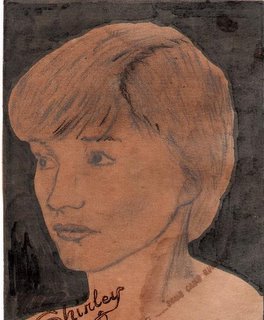 Lastly, harried restoration work was attempted on those saved using the much darker imprints and shades of charcoal pencils. The sketches then are not how they looked originally. And with the scary results, it may have been a great mistake to retouch them in the first place.