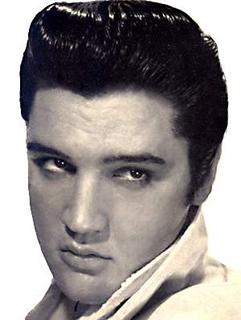 In short, of heroes and idols that we all wanted to be like when we grew up.

For me, one of the most enduring ones is that of the King, Elvis Presley. Who closer than an alter-ego I had wanted to be. In looks and of course, in singing style.

Reality does have its own inimitable ways of pulling feet to firm ground. And genetics and the ensuing years inexorably proved that true.

Still, color-fast vestiges of dreams resolute and deep simply cannot easily be consigned to the dustbin of forgetfulness. Such dreams have their own equally unwavering guiles of growing on legs and living their own little lives in one’s consciousness and reality.

Again, Elvis Presley is one of them.

Since then and over time, the legend lives on!

What started as a very inauspicious introduction to him via a run-of-the-mill pocketbook of 50’s song hits with the King’s countenance emblazoned at the back cover in somber black and white, my unending drudgery continues on. Featured on that songhits book was the raw, rough and loud rendition of the King of “I Want You, I Need You, I Love You”. It didn’t matter, I clung to his every stuttered word and tried with all my puny might to imitate, with every groan and hip-shaking move.

Many hurts and aches have come and gone brought down by the onslaught of time and untold miseries interspersed with some inspired moments. But still no end in sight for the dream that refuses to die.

Thus, I continue to be saddled with the unenviable task of gathering together what remains of a king who died too young. Continuing the journey of still trying to be like him.

I have in my possession over 4 gigabytes of Elvis Presley songs on MP3 format and permanently stored on CDRs and on hard disks in a couple of PCs, detailing songs released as singles, outtakes of many songs that never made it to the final recordings, songs collected as albums released through the years prior to and after his death. Songs performed on appearances with radio and/or TV hosts. Home recordings on very crude recording machines and media translated into MP3s. (Elvis is on record as having recorded about 700 songs. Quite a feat for a short lifetime of 42 years.)

More gigabytes of video clips of performances before and after the Las Vegas years. And clips from the movies highlighting the songs that became hits.

BetaMax and VHS tapes of his earlier movies and those videos manufactured after his death as commercial memorials of his legacy. Including now unplayable reel-to-reel tapes and 8-track cartridges that continue to deteriorate over time and humidity.

Various books, both pocket-size and the coffee table type, as more commercial attempts to capitalize on his enduring popularity. Picture clippings from various magazines and newspapers. And a boxful of floppy disks with Elvis pictures on them. A folder with the detailed anthology of all Elvis songs.

And yes, Elvis trinkets such as a refrigerator magnet, a pen that plays a favorite Elvis phrase in a characteristically unique Elvis way (“Thank you, thank you”), and an ornate and intricately-designed metallic opener, a huge beach towel silk-screened with his face on it. And yes, some cards and a tin box for a jigsaw puzzle. A couple of framed 45s of songs that hit No. 1 on the charts.

Some LP albums, boxed cassette sets, audio CDs, even Video CDs on Karaoke format. Can’t locate several 78s from the Sun Recording Studios with their familiar bright yellow labels, containing the songs now collated in the album justly tagged as the Sun Recording sessions, which has been adjudged as the definitive album on the enduring phenomenon called Rock and Roll.

And yes, a couple of sheets of Elvis postage stamps, featuring the old and leaner Elvis.

And of late, a karaoke machine which had the complementary DVD disc that contains about 14,000 songs in English, Tagalog, Chinese and Japanese. Okay, but its one redeeming value is that the songs of Elvis featured among the selections are the Elvis songs of old. Pure and pristine, raw and unadulterated Elvis. Now, who would remember these songs? Poor Boy, Treat Me Nice, Baby I Don’t Care, Love Me, Anyway You Want Me.

I once heard inside one very popular music store chain, a young amply-haired salesman loudly complain to an associate nearby that he wondered why many were continuing to buy Elvis records when he did not even write his songs and sang only the songs of others.

He was right of course, popularly speaking. But technically, do you know that in the initial release of Poor Boy, Elvis is credited as having written the song? Over the years, I have not found any other Elvis song similarly accredited.

And lastly, on this same blog I have a link to an Elvis site, which details particularly his early years.

Have not updated this blog for at least two weeks and paradoxically I have been quite busy doing things. A lot of things other than updating this blog.

I have been reading online news and with more focus, other people’s blogs and at times making appropriate comments in them. And considering the volume of work out there being churned at dizzying velocities, it is no mean understatement to declare that just trying to get a good glimpse of what people are writing about is in itself quite a formidable task.

I consider all the beautiful, astoundingly complicated, intellectually superior, and articulately gifted minds out there sifting through veritable gold mines of ideas and events readily made accessible and available to most everybody in the world with the continually evolving technologies. Then, bringing to bear those blessed minds into dissecting, analyzing, and hypothesizing as quickly as those ideas and events become news or are publicly aired.

And there are many such gems and precious stones of blogs out there, all for everybody with Internet connection to discover, choose from, and hopefully learn from. Names and URLs are unnecessary in my estimation.

Let your own mind track them down and judge for itself where the real gems are. Those that are still diamonds in the rough, and those that outwardly shine but upon closer examination are actually fool’s gold.

And the entire world is your virtual playground. From the standards-setting blogs in the US, to the neophytes in war-torn Iraq, from the fast-learning English speakers in third-world countries like the Philippines, to the old-country sophisticates in Europe, or to any wired corner of the globe where English can be written and uploaded as prose or verse to the Internet.

It is quite a humbling experience for me then to ask myself:

What could I possibly write about that has not already been written, written in a much better and more interesting way?

What fresh angles to any interesting or crucial story could I possibly triangulate that have not already been eloquently dissertated somewhere?

And mold it in such a way that people will take notice?

What novel ideas or notions could I possibly concoct that would turn some heads toward my direction?

What possible gifts of language and tongue could I possibly discover and marshal in creating a story, an essay, a report, or verse that would at least be at par with the standards set by those sites who obviously have hurdled them based on their reach and readership?

These and more are questions/issues that are currently being processed by this humbled and confused blogger.

Throw in some time constraints blocking the way and what we have here is a real-time dilemma that needs some resolving.
Posted by Amadeo at 10/19/2005 11:57:00 AM No comments: