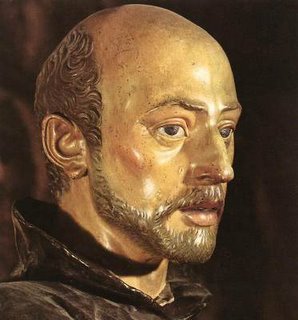 The title of this blog refers to St. Ignatius of Loyola, Spanish founder of the world- wide Jesuits. Having been educated by Jesuits in one's formative years strongly lends one to subscribe and follow the same moral precepts and ideas that not only characterize Jesuit education, but which each Jesuit lives by.

First and foremost, why would anybody read and/or participate in this weblog? People usually read books and articles written by persons who are already famous or noted for their personalities, stations in life, accomplishments, positions, etc.; and events or issues that they undertake to articulate and reduce to print become events and issues that are invested with the same degree of admiration, importance and celebrity status assigned to their persons. Thus, books and articles that they write become worthy of reading essentially because things they write about also become newsworthy.

I am convinced that the teeming number of people out there living through their typical workaday lives are also sufficiently concerned and interested about other people sharing similar lives.

The weblog will be an attempt to do just that, compile random life experiences and thoughts, and share them with kindred souls.

It is a personal belief that each man is born into this world with a uniquely personal purpose to fulfill. Thus, it is expected of him to conscientiously gear his serious efforts toward the direction and attainment of that singularly personal purpose. This he does to gain proper and deferential approbation both before the eyes of God and of humanity.

Most of men's lives are essentially quiet and simple workaday lives, that at times border on boredom and monotony. Like the breathtaking silence of dawn, most men's lives are serene and contemplative - prone to meeting quietly the multitudinous concerns that beset them daily. Patiently, gradually, and unobtrusively, they try to get things done, unmindful of how others may view them.

However, there are those of us, or maybe most of us, who devoutly wish that some day, like the brilliant but fleeting spectacle of a heavenly comet, we could shine in solitary grandeur and be in the glaring spotlight of the world for all to see and witness.