Remembrances of My Late Mother

More than meriting title to being quiet and mum as a clam, my mother was truly a woman of very few words. She spoke little. Thus, I doubt I need spend time calculating the conversations we had had as adults. We had very few, and each one went like telegraphic exchanges between two frugal individuals.

In hindsight one can easily recall how those few incidents came about. And thus the task of retelling is that much easier. But they definitely created lasting impressions. How else to explain my very vivid recall.

In one visit and from out of the blue, she framed her conversation in one sentence. And it simply was a curt admonition to take care of my younger brother, and spoken in the vernacular. As was usual with me, it went in and was soon replaced with more urgent mundane matters. But during moments of lull, that statement would come back to occupy my wakefulness. Why the admonition and why me? The mind started racing looking for rationales and answers. As very young kids, all nine of us grew up in that old house along Del Mar and Victoria Sts. The house sat fully on exactly 100sq.m. of land, leaving nothing but the sidewalk to separate it from the two streets. And we counted on the kind graces and forbearance of two aunts who owned the two lots on the other two sides in allowing our little horde to use their free spaces for our purposes. One lot was initially vacant and the other occupied by a house of another aunt. The vacant lot was there to serve as our free space – for a while at least until a house was also built on it.

Nine precocious kids grew up in those cramped and eternally-shuttered quarters in the middle of a busy poblacion, two blocks away from the town plaza. As a small kid my younger brother had assigned quarters in one bedroom on the ground floor which space used to serve as my father’s law office. This he shared with another younger sister. And from all indications that served as some kind of sick bay since the two siblings took cadenced turns being treated with all sorts of ailments – wheezing coughs, fevers, urticaria or hives, bad colds, etc. So most nights one heard the unmistakable sounds of the ailments as one passed through that section of the house, with my mother serving as relentless and indefatigable Florence Nightingale to the siblings in distress. And this went on till early adolescent years.

That younger brother was the first to go a couple of years ago among the nine siblings. Was my mother gifted as prescient or armed with clairvoyant tendencies to qualify her to make such dire predictions? I doubt that. It most probably stemmed from maternal instincts honed from many years and countless instances of service to enable her to make prudent observation and judgment on the physical make-up of her sizable brood. After all, she exhibited the same personal dedication and selfless passion in taking care of all nine of us.

Years later after having married and living away from her, another short telegraphic dialogue transpired. She had received a letter from two distinguished Jesuits, very well respected locally, Frs. A. Cuna and J. Fuentes, regarding a Cursillo course participated in by her youngest offspring. She was being asked to write a confidential letter to be delivered to the above Jesuits. Imagine that!

What does she do? She calls for me and almost demandingly asked for me to write that letter. Why me? The year was 1972 and I was deep into raising my growing family and coping with the burdens of working in a busy bank. So naturally, I balked. No words from her followed, except that I was left holding the letter from the priests.

Without further instructions, and without any ideas suggested on what that letter would contain, I knew that she had expected to receive that letter before it was due. Rummaging through old files, I chanced upon these two letters stapled together. Suggesting without a doubt that the letter required of her was written and submitted on time, and penned by me. 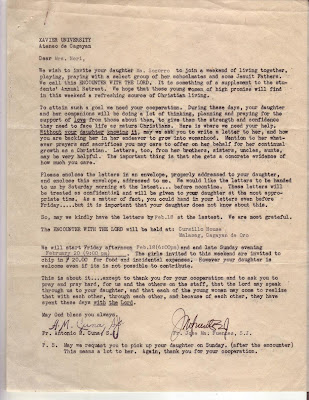 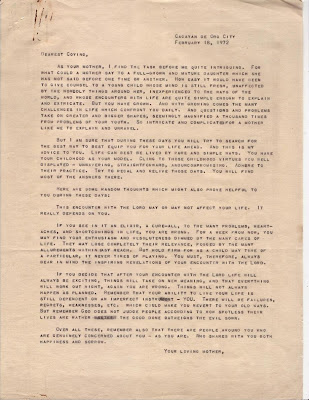 Was she so sure that the ideas that I would put on paper would be the same ideas she had in mind and held in deep trust? I do not recall having to retype anything regarding this letter.

Maybe it was like this. How could revisions be necessary since I was simply being used by her as her instrument?