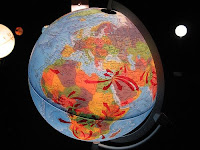 Silly question? One might think so. But not necessarily, given that global migration has never been as acute as the present time.

So, where is home?

These figures were gathered by the Pew Research Center for the US, a country noted for a populace almost addicted to wanderlust. Compared to as early as the 60’s when consistently about 60 percent Americans moved homes, the rate has gone down to its lowest at 13 percent for the 2006-2007 period.

Anyway, the more interesting issue is the question of “Where is home?” as judged by the US resident/citizen himself. Critical especially for a country like the US, composed mostly of immigrants. That is, residents or citizens born in another country and resettled in the US. For them, where is home?

Pew Research said that among naturalized citizens, the majority (that would be 50 percent plus 1 at least) considered the US their home. And for US citizens born abroad, the same rate applies.

I suppose the concept and practice of dual citizenship could be a contributing factor. And the nature of culture could also be another determinant. But why the same among US citizens born abroad?

One neat trick I have used to disarm my old compatriots into revealing their innermost feelings has been to ask instead of saying “when are you taking a vacation to the old homeland”, “when are you going home?”. And if they give a straight-out answer without giving any qualifications about where home is, you know what they are thinking. And my experience has shown that almost to the man, they will make no such qualification, even if they have stayed in the US most of their lives, or their entire families are already in the US.

And personally? I myself find me in a quandary and would only feel comfortable when I say that both the US and the old hometown are my homes. While we now find ourselves, me and wife, spending more time in the old homeland, all our kids and grandkids are in the US and definitely call that home. But we do maintain our own residences in both places. We need bring only a piece of hand-carried luggage to start picking up our lives in either place.

But it would be interesting to find out how others handle this ticklish question.

BTW, while I off-the-cuff do not know of any such similar data for the Philippines, I would venture to say that only a small percentage of Filipinos move away permanently from their hometowns during their lifetime. Moving there involves more than just getting into strange places, one also has to reckon with strange dialects and customs. And down south, even with different religions or practices (Christianity, Islam, or aboriginal practices).

Aside from the more traditional reasons for leaving like study, work, or marriage, people movement could also be occasioned or forced because of deteriorating peace and order situation in certain beleaguered areas. And I say widespread poverty could also be a big constraint for many moving far enough to have better chances at livelihood.
Posted by Amadeo at 12/20/2008 02:10:00 PM 2 comments: