Instead of Hills and Rivers 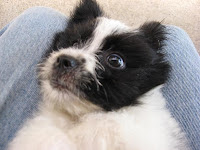 Instead of taking pictures of hardly-changing hills and rivers of the old homeland as part of a nostalgic trip as suggested by one equally forlorn friend, I opt instead to write about things that have changed since we left in what seems as a generation ago.

During our days we never imagined that having or getting dogs would be initiated through a business, a thriving business at that. When we wanted dogs we simply waited for friends' or relatives' dogs to have litters, then we asked for one or two. And our concept of having dogs as pets then was generally as watchdogs, or as "askals" letting them loose in the neighborhood. Watchdogs forever alert but really ignored to the side, or as “askals” go, like an orphaned kid who may come home for need of scraps or whatever.

Now pet shops are clearly visible around here, in the malls and elsewhere. Where birds, cats, dogs, fish, or whatever live animal will catch the onlookers’ fancies. And trailing them are the accoutrements necessary for their care and maintenance – cages, carriers, feeds, vitamins, glass tanks, etc. 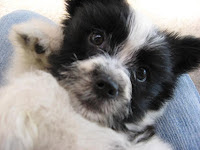 Since I wanted a dog in the house, simply as one barking dog who will alert the occupants of any intruder or what, I looked for one and found this.

Reasons for choice? One of course was the looks. This is a mix, or a mongrel, of a Shih-Tzu and Terrier. Simply Terrier I was told. The better reason? It was cheap at 4,000 pesos, especially compared to a pure breed pup that was selling at 22,000 pesos. On earlier searching expeditions, I found out that these dogs do not sell cheaper than 6-7 thousand pesos locally. Thus, 4K was a good bargain.